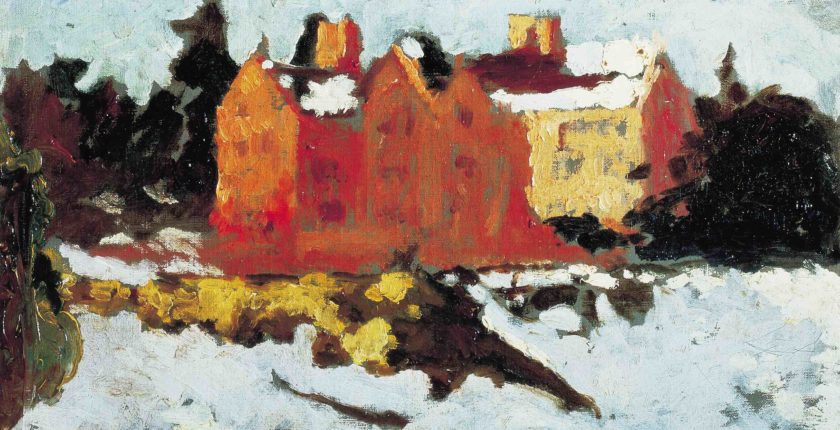 “Winter Sunshine, Chartwell,” oil on millboard, circa 1924, Coombs 142. During a Christmas season in the 1920s, Churchill painted a familiar scene of his Kentish home under snow. (Reproduced by kind permission of Churchill Heritage Ltd.)

“Let the children have their night of fun and laughter, let the gifts of Father Christmas delight their play. Let us grown-ups share to the full in their unstinted pleasures before we turn again to the stern task and the formidable years that lie before us, resolved that, by our sacrifice and daring, these same children shall not be robbed of their inheritance or denied their right to live in a free and decent world. And so, in God’s mercy, a happy Christmas to you all.”  —Winston S. Churchill, Washington, 24 December 1941.

Christmas 1939 found Britain at war. The family spent what was effectively the last Christmas of a dying era. Now that he was again First Lord of the Admiralty, Churchill’s sense of duty prevailed. “In view of the danger of surprise attacks at a time when the enemy may expect to find us off our guard, there must be no break or holiday period at Christmas or the New Year,” he minuted. “The utmost vigilance must be practised at the Admiralty and in all naval ports.”18

World War II clamped many a lid on Christmas celebrations. When Eric Seal, his principal private secretary, asked to arrange a week’s leave for the private office, Churchill replied: “Your minute about Christmas holidays surprises me. No holidays can be given at Christmas, but every endeavour should be made to allow members of the staff to attend Divine Service on Christmas Day, either in the morning or afternoon. My own plans will be to work either here (Chequers) or in London continuously.” He set off from Downing Street wishing the staff he left behind “a happy Christmas and a frantic New Year.”

He did celebrate, as anyone would who survived 1940. Private Secretary John Martin wrote:

We had a festive family Christmas…. For lunch we had the largest turkey I have ever seen…. Afterwards we listened to the King’s speech. Vic Oliver, Sarah Churchill’s actor husband, played the piano and Sarah sang. It was the same after dinner. For once the shorthand writer was dismissed and we had a sort of sing-song until after midnight. The PM sang lustily, if not always in tune. When Vic played Viennese waltzes he danced a remarkably frisky measure of his own in the middle of the room.19

December 1941 found the United States at last in the war, “up to the neck and in to the death,” as Churchill put it. The holiday found him, quite naturally, in Washington, for the memorable remarks above.

By the end of 1942 things began to improve: the Japanese were contained, more U-boats were being hunted down, there was victory at El Alamein. Christmas at Chequers found Churchill in “a grand temper,” secretary Elizabeth Nel remembered. He “left us in peace most of the time and just sat up in bed reading a book and looking like a benevolent old cherub.” To President Roosevelt he telegraphed: “I passed a happy Christmas in your home and now I send my heartfelt wishes to you and all around you on this brighter day than we have yet seen.” Roosevelt replied, “The old team-work is grand.”20

Churchill nearly died of pneumonia in North Africa following the Teheran Conference in late 1943; his wife and doctor rushed to his side in Carthage. His doctor Lord Moran spoke of his emotion when told she was coming. “Oh, yes,” she replied, “he’s very glad I’ve come, but in five minutes he’ll forget I’m here.”

Sure enough, by Christmas Day he was back on whisky and cigars, enjoying an epic plum pudding, and meeting with General Eisenhower, the supreme Allied commander. General Alexander, Air Marshal Tedder and Admiral Cunningham were also there to discuss the coming invasion of Europe. Clementine Churchill, who had attended church services, returned to say that a white dove had alighted on the altar just as the Blessing was pronounced. “An ecclesiastical hoax!” declared the Prime Minister.21

“This brand I snatched on Christmas Day”

The following year drew him away again, without protest from the stalwart Clementine. The family had gathered at Chequers with a huge Christmas tree, the gift of President Roosevelt. Suddenly, telegrams brought news of a civil war in Greece. It was one place in eastern Europe where Stalin had agreed not to meddle. Churchill immediately left for Athens, to negotiate a truce between communists and royalists that saved Greece. Nine months later he remarked that the “Bolshevisation of the Balkans” was almost complete. All “the cabinets of Central, Eastern and Southern Europe are in Soviet control, excepting only Athens. This brand I snatched from the burning on Christmas Day.”22

Churchill had been out of office six months by Christmas 1945. The day was spent at Hyde Park Gate, his new London residence. As part of the festivities, he took the front row in a marionette show for children, delivering a running commentary on a puppet frog being chased by a duck. He liked this, he told the youngsters, “because the frog got away.” It might have reminded him of his own many close escapes.23

At Chartwell on Christmas 1946, Churchill’s presents included honey from Sir Stewart Menzies, head of the Secret Service throughout his premiership. Two bottles of port arrived from Duncan and Diana Sandys. Sir Stafford Cripps, perhaps in jest, sent a bottle of turpentine. Despite political opposition the Churchills remained good friends with the Clement Attlees. Replying to their Christmas greeting, he said he was struggling with his war memoirs. “It is a colossal undertaking, and I may well collapse before the load is carried to the top of the hill. However, it is a good thing to get a certain amount of material together which, if not history, will still at least be a contribution thereto.”24

“Everyone was ‘dolled up’”

An aging Churchill was now less able to cope with England’s damp, cold winters. Christmas 1947 found him in Marrakesh, where he came to paint and write. At the Mamounia Hotel he hosted a party for staffers who had given up their holiday to accompany him. “There was a 25-foot Christmas tree, windows hung with orange branches, and daubs of white paint on the window panes made it seem that a blizzard was blowing outside,” wrote his daughter Sarah. “Everyone was ‘dolled up’….When midnight struck they raised their glasses and clapped—and ‘Vive Churchill’ and ‘Bravo’ echoed round the room.” The band played It’s a Long Way to Tipperary as a Christmas pudding was brought in. Much moved, Churchill bowed to them all.

Sarah thought he was leaving when he stood up, but not so. “Whirl me round the floor once, Mule—I think I can manage it.” They took the floor for a waltz amidst a roar of applause. Then Churchill danced with all his secretaries.

Suddenly he was attracted by “a good-looking fair lady” seated by herself. Sarah remembered him asking, “Why is she alone? Dance me around the floor.” They stopped before this proud but forlorn looking woman. Churchill said: “You are the Christmas fairy. May I have a dance?”

Sarah had no idea what they said, but “he never liked to see a beautiful woman alone.” He escorted her back to her seat and bowed. Meanwhile, the detectives wondered if she had been imported as a spy.

Later they received a telegram: YOU WILL NEVER KNOW MY NAME BUT I AM PROUD TO HAVE DANCED WITH WINSTON CHURCHILL.25