Churchill: A Million Allied Soldiers to Fight for the White Russians? 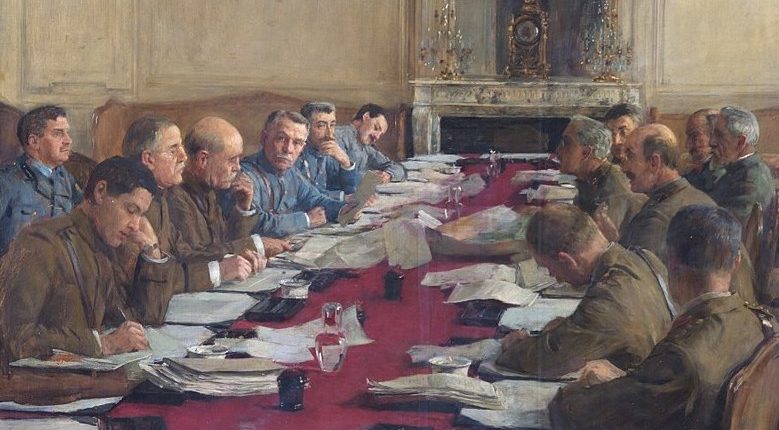 Military representatives of the allied powers at the Peace Conference. (Public domain via Imperial War Museum)

A reader refers us to The Polar Bear Expedition: The Heroes of America’s Forgotten Invasion of Russia 1918-1919 (2019). It repeats a widespread understanding about Churchill’s role in aiding the White Russians against the Bolsheviks. By the spring of 1919 in Russia, we read:

…the cat was out of the bag: whether its allies—English, French, White Russians—liked it nor not, the U.S. was pulling out. On March 4, the British War Cabinet decided to follow suit, ignoring the arguments of the virulently anti-Bolshevik Winston Churchill, who as secretary of war had proposed increasing the Allied commitment in Russia to one million men. This after England had nearly been bled dry in the just-concluded four-year Great War.

“The passage makes Churchill sound like a madman,” our reader writes. “What is the truth of the matter?”

First, it wasn’t simply America’s invasion. After the Armistice of November 1918, many Allies sent troops to assist Anton Denikin and Alexander Kolchak, leading rebels against Lenin’s Soviet government. Allied intervention on behalf of the White Russians involved hundreds of thousands of troops. By far the largest contingents, up to 70,000 each, were from Czechoslovakia and Japan. America’s commitment was 11,000, Britain’s 7,500, France’s 15,000. Czech casualties dwarfed those of the others. Second, Winston Churchill never demanded the Allies send a million troops. He did mention the likely involvement of a million White Russians, but that is quite different.

What really happened? Sir Martin Gilbert’s Official Biography, World in Torment 1916-1922, offers the truth. Churchill did powerfully support aiding the White Russians. He was also mindful how far the Allies could go. He also favored a firm decision. When he realized they would not go far enough, he urged disengagement.

The British War Cabinet met on 10 January 1919, a week before the Paris Peace Conference began. The day before, Churchill had accepted Prime Minister David Lloyd George’s offer of the War Office. Cynics said it showed Lloyd George’s sense of irony when he made Churchill war minister after the war was over.

In fact, Churchill’s chief task was to demobilize and bring home four million men. He was well aware of their sacrifice. A million British, Indian, Canadian, Australian and other soldiers had given their lives. Cabinet discussions turned to Russia, and Martin Gilbert describes the scene:

Sir Henry Wilson pointed out that during the past week “there had been signs of unrest in the Army at home, and it was notorious that the prospect of being sent to Russia was immensely unpopular.” [But Marshal Foch had said it was urgent] “to stop the advance of Bolshevism before it penetrated Austria and Germany.” Churchill supported Foch’s appeal…. He then suggested that the defeated German army should be used to check the westward advance of Bolshevism….

Wilson was Churchill’s senior adviser on military affairs, but frequently disagreed with his civilian chief. Wilson was convinced, he wrote in his diary, “that we (British) should keep out of the scrum. If the Americans and French like to go in, let them.” He agreed with Churchill’s idea about using the defeated German army: “We should order the Boches to hold up Bolshevism.” But few in the Cabinet wanted that.

At the Peace Conference

So informed, the Prime Minister went to Paris. Lloyd George, Gilbert continues, “favoured conciliation rather than intervention.” Backed by U.S. President Wilson, he invited the Bolsheviks to a peace conference at Prinkipo, a Turkish island near Constantinople. Churchill joined Lloyd George on January 23rd, ostensibly to present his demobilization plans. Learning of the Prinkipo proposal, he protested that it would amount to recognizing Lenin’s vicious regime.

In London, Cabinet opinion was strongly against British intervention. Lord Curzon, shortly to become foreign minister, wanted other countries to act. Austen Chamberlain wanted no intervention by anyone. President Wilson in Paris was also opposed. If it occurred, he said, Britain and France would “have to sustain the whole cost.” The White Russians, Wilson believed, could not survive “for a moment” by themselves.

Above all, Gilbert writes, Churchill wanted a firm decision. “He offered his colleagues three clear choices: authorize him to intervene with British troops; aid the Whites with guns and equipment; “or to withdraw.” Lloyd George, continues Martin Gilbert,

… asked Sir Henry Wilson to prepare a statement showing the military effect of each of the three possible policies…. Churchill himself sent a long note to Wilson, in which he asked him to assume, in his calculations: (a) that the Prinkipo Conference will not take place and that the Allied Governments will instead make a united appeal to all loyal Russians to exert themselves to the utmost against the Bolsheviks; (b) that no troops can be sent from this country by compulsion to carry on the war in Russia.

Churchill envisioned helping the Whites but not bearing the full burden. Repeatedly he insisted, “the only chance of making headway against the Bolsheviks was by the use of Russian armies,” Gilbert continues:

There were, he said, nearly half a million anti-Bolshevik Russians under arms, and the Russians themselves planned to double this figure. “If we were unable to support the Russians effectively,” he added, “it would be far better to take a decision now to quit and face the consequences, and tell these people to make the best terms they could with the Bolsheviks”….Churchill went on to speak of the possibility of the Allies deciding to declare war on the Bolsheviks “by a united declaration in Paris. If this were done then British forces would have a part to play at Archangel, and Murmansk, in the Ukraine, Estonia and the Caucasus. There would be no “difficulty,” he said, “in finding the necessary volunteers.”

“I am all in favour of declaring war on the Bolsheviks,” Sir Henry Wilson declared, “but the others, except Winston, won’t.”

Before leaving  the Peace Conference, President Wilson was asked if he still supported the Prinkipo meeting. Yes, he said, but then he waffled.  The Bolsheviks had “raised a number of issues” he said, which were “insulting”: repayment of debts, concessions and territorial compensations. In the event, the Prinkipo conference never occurred.

A Plea for Decision

Winston Churchill didn’t waffle. Again as Martin Gilbert shows, he implored his colleagues to make a decision—but to understand what withdrawal would mean:

The complete withdrawal of all Allied troops was, at least, “a logical and clear policy,” but [Churchill] feared that its consequences “would be the destruction of all non-Bolshevik armies in Russia,” a total of half a million men, whose numbers were increasing. “Such a policy,” he continued, “would be equivalent to pulling out the linch-pin from the whole machine. There would be no further armed resistance to the Bolsheviks in Russia, and an interminable vista of violence and misery was all that remained for the whole of Russia.”

Churchill accepted that the Allies could not “send conscript troops” (draftees) to fight with the White Russians. He favored “volunteers, technical experts, arms, munitions, tanks, aeroplanes.” In Paris, President Wilson was skeptical: “At present our soldiers were being killed in Russia, if they were removed many Russians might lose their lives. But some day or other the Allied troops would be withdrawn; they could not be maintained there for ever and the consequences to the Russians would only be deferred.” A few hours later, he left to return to the United States.

The President no sooner arrived in Washington than he announced withdrawal of U.S. troops “at an early date.” On 23 February, a British battalion, the 13 Yorks, refused to march in support of fellow forces on the Archangel front. Their Commander, General Ironside, said they’d been aggravated by the American announcement. Four days later, Churchill  sent Lloyd George an anguished letter, which perfectly understood the attitude of the British battalion:

I send you herewith a statement of British assistance given to Russia, which, as you will see, is considerable. The criticism that may be passed is that it is related to no concerted policy, and that while it constitutes a serious drain on our resources it is not backed with sufficient vigour to lead to any definite result. There is no “will to win” behind any of these ventures. At every point we fall short of what is necessary to obtain real success. The lack of any “will to win” communicates itself to our troops and affects their morale: it communicates itself to our Russian allies and retards their organisation, and to our enemies and encourages their efforts….

The Allied Powers in Paris have not decided whether they wish to make war upon the Bolsheviks or to make peace with them. They are pausing midway between these two courses with an equal dislike of either…. It is necessary in my opinion that you should…hammer out a policy…. No one below you can do it.

Lloyd George acted. When he returned from Paris, the War Cabinet voted to begin evacuating British troops from Russia. On 5 March Churchill asked his chiefs of staff to implement withdrawal. Again we have Martin Gilbert to thank for his exact words. They show Churchill as anything but a mad warmonger. He asked for

a definite timetable for this operation prepared with the necessary latitude… I am extremely anxious about this position, and from day to day my anxieties increase [and] I have announced to Parliament and pledged the War Office to leave no stone unturned [so long as we act in] a manner not incompatible with the honour of our army. I should like also to be able to raise the morale of our men out there by promising them definitely in a message direct from me that they will either be relieved by volunteers from England or withdrawn altogether as soon as Archangel is open….

Historical assessments of the Allied intervention on behalf of the White Russians are almost all negative. The Bolsheviks concluded that the West wished to destroy them. The operation prolonged a bloody civil war with nothing to gain at the end but Russian enmity. It is debatable whether that enmity still mattered when Russia and the West faced a more implacable foe in 1940. Stalin was many terrible things, but he was also a pragmatist.

Churchill’s view in 1919 was clear:  As he wrote to General Harington, Deputy Chief of the Imperial General Staff: “We may live to regret bitterly the opportunities and resources we are losing through the present indecision.” Time duly validated his prediction: “an interminable vista of violence and misery was all that remained for the whole of Russia.”

Churchill’s view many years later was unaltered. “If I had been properly supported in 1919, I think we might have strangled Bolshevism in its cradle,” he said at a Washington press conference in 1954. “But everybody turned up their hands and said, ‘How shocking!’”

No evidence exists that Churchill wished to commit a million Allied troops. The British contingent he envisioned was small, and made up of volunteers. Above all, Churchill wanted decision, not hesitation, which he abhorred all his life.

Many years later, he would write of another War Cabinet reluctant to take the offensive, in another world war foreseen by only a few back in 1919: “On the one side endless discussions about trivial points, no decisions taken, or if taken rescinded, and the rule ‘don’t be unkind to the enemy; you will only make him angry.’ On the other, doom preparing—a vast machine grinding forward ready to break upon us!” The vast machine born in 1917 did break upon the Western democracies after the Second World War. It produced a conflict that would last forty-five years.