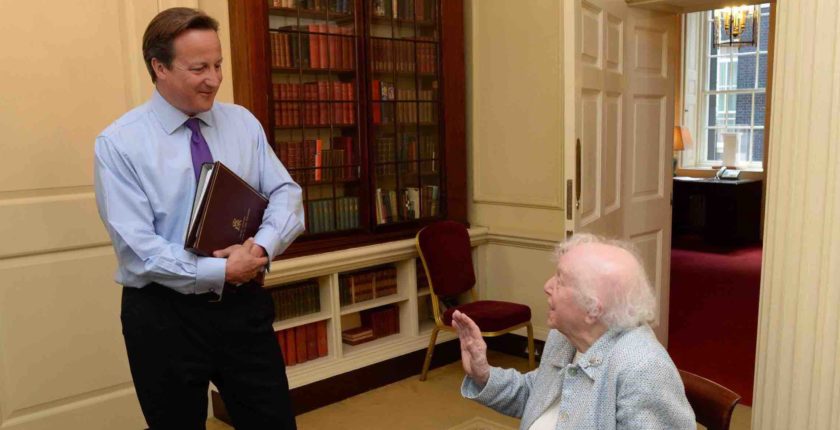 In 2013 Prime Minister David Cameron invited Nora and her son Robert to Downing Street, where she regaled the PM and house historian with her recollections, seventy-three years on.

In 2013 Prime Minister David Cameron invited Nora and her son Robert to Downing Street, where she regaled the PM and houes historian with her recollections, seventy-three years on.

Walking with Destiny, Andrew Roberts’ outstanding Churchill biography, has led to discovery of interesting sidelights. This one comes from Robert Henty, whose late mother Nora was among those saved by Churchill when a bomb fell on Downing Street.

Aside from Nora’s warm memories of camaraderie and friendship, her story does remind us of how near everyone around the Prime Minister lived with death in 1940 London. To set the stage, we quote from Walking with Destiny, page 604. —Editors

Churchill was halfway through dinner in the steel-shuttered Number Ten basement when he had what he later called “a providential impulse.” He got up and went to the kitchen to order Georgina Landemare, his cook, as well as the butler, kitchen-maid and other staff, to leave the food on the hot-plates and go to the air-raid shelter immediately. He then returned to the table. Three minutes later, a bomb landed between Number Ten and the Treasury, causing, in the words of Churchill’s memoirs, “a really very loud crash, close at hand, and a violent shock showed that the house had been struck.” His bodyguard, Walter Thompson, came in to say that much damage had been done.

“The mess in the house was indescribable,” Private Secretary John Martin told his parents, “windows smashed in all directions, everything covered with grime, doors off hinges and curtains and furniture tossed about in a confused mass. … The hut of the soldiers who guard Downing Street was completely demolished; fortunately they had taken refuge elsewhere…” Churchill told Thompson, “A pity it didn’t fall a little closer in order to test our defences. In fact it was just as well it had not, since the bomb-blast devastated the kitchen and pantry as the large plate-glass window blew in. Rather extraordinarily, they went on with dinner; Lord Lloyd, who was quite close to the explosion at the Colonial Office, wrote to his son later that night to say, “Winston is all right having a very good dinner and very cheery.” The next day at lunch, Churchill told the King “that he had saved his cook and those in the kitchen.” Churchill’s detractors accuse him of being thoughtless and curt towards his staff, and so he undoubtedly was on occasion. But that evening his natural sense of noblesse oblige, and what he believed to be the “invisible wings” that flapped over him, saved innocent lives.

Andrew Roberts’ account was verified in all respects by my late mother, Nora Henty (née Burrows.) During the war years, she worked for Mr. Churchill at the Admiralty and Number Ten. When I sent him her memories of the occasion, Dr. Roberts shared it with the Churchill Project, which asked me to relate it for posterity.

My mother was known by her middle name Nora (sometimes misspelled “Norah” in documents she preserved.) In 1938, she entered the Home Training School, Norwood Technical Institute, London. She was offered her first job by the Admiralty, where the Institute had sent her for an interview. She was then only sixteen.

Churchill had been First Lord of the Admiralty since the war began, and Nora soon found herself working for the Churchill family. Among her effects is a letter from Kathleen Hill, Churchill’s Personal Private Secretary: “I am pleased to tell you that Mrs. Churchill wishes to engage you as kitchen maid here …we look forward to seeing you on 1st March.”

Mrs. Hill went on to list clothing required: “Mrs. Churchill prefers the kitchen maid to wear a cap, and perhaps two or three would be enough.” Clearly Mrs. Churchill, in charge of staffing at Admiralty House, took a very personal role in hiring. Later Churchill became Prime Minister, and eventually moved to Ten Downing Street with his staff, including Nora.

My mother, who liked to keep important documentation, always had amusing stories to tell of her experiences. Of course, she always kept confidential information to herself. Like all the staff, she had signed the Official Secrets Act, and viewed that commitment seriously. As a result, she took many sensitive details with her when she passed away in 2016.

Nora Burrows worked for the Churchills’ famous cook, Georgina Landemare. A kindly woman, she advanced Nora’s training and skills and befriended Nora’s parents. They kept in touch for many years after their service ended. Despite her strong character and sense of duty, Mrs. Landemare had a kindly disposition. When she found that Nora had never been to a cinema, she took her personally, on one of their weekly half-day breaks. She liked to say she had worked her way up to her own position by “marrying the chef.” Her husband Paul was a famous chef at the Ritz Hotel in London.

At Downing Street, Nora’s quarters were on the top floor (where the PM now has a private apartment). The huge kitchen was in the basement, so there were many stairs to climb. The main kitchen table was a huge tree, cut lengthwise with the flat surface varnished. She was the youngest by far of all the staff, and all looked after her to some degree. She often spoke of camaraderie and teamwork, despite the heavy, twelve-hour days.

Wartime rationing of course applied to Number Ten like anywhere else, yet the PM often entertained VIPs, including the King himself. Georgina Landemare’s skills were up to the challenge. I asked my mother how the cook had access to such delicacies as salmon and other game. She said they were often sent from Scotland, sometimes from the royal estate at Balmoral, having been caught with Number Ten in mind.

In one letter to my grandparents, Mrs. Landemare mentions a “Stilton carcass.” Mr. Churchill’s love of Stilton was shared by my grandfather. Sometimes after visiting his daughter, Mrs. Landemare would give him the remnants of a large Stilton to take home—rationing, of course, prevented purchase.

Mrs. Churchill was well-known for her high standards. Once, leaving Nora in charge of preparing her breakfast, Mrs. Landemare left precise instructions. Mrs. Churchill would be served in her room. She wanted two poached eggs on toast, but most importantly the plate must be hot. (Sensibly enough, she didn’t like hot food on a cold plate.) Nora had to repeat the instructions, particularly the bit about the hot plate.

Nora duly cooked the eggs as requested, shaped the toast around them, and arranged the tray. Later Mrs. Landemare asked if everything had gone well. The food was perfect, but Mrs. C. had burned her hand on the plate. Apparently my mother had been a little overzealous in the plate warming!

Another time, Nora brought a pot of tea to the Prime Minister, who was usually served by others. Nervously, she prepared the tray and brought it in—but as she poured the tea, there issued forth only hot water! In her anxiety she had forgotten the tea. Mr. Churchill was not at all cross. Instead he laughed, no doubt finding Nora’s red face amusing.

Given her position, Nora didn’t interact much with the PM, but she remembered one poignant experience. The staff was often ordered to the air raid shelter. On this occasion she noticed Mr. Churchill standing at a large blackboard. In the air battle above, losses were being totaled. Lots of people were present, the mood somber. It seemed we were not getting the better of this engagement. Mr. Churchill looked anxious. After a long time we were allowed to leave, and it became apparent that our pilots had prevailed after all. It wasn’t until after she had left service and the war was over that my mother realised this had been at the height of the Battle of Britain.

Marshal Tito was once asked what struck him most about Churchill. “His humanity,” Tito quickly replied. “He is so human!” This was Nora Burrows’ experience in her much humbler station. The Churchills were invariably kind, especially Mrs. Churchill. Hearing that my grandparents’ house had been hit in the Blitz, she immediately sent clothing from her own wardrobe and other essentials. My mother said she would do that for any staff member who needed help.

All my mother’s stories reflected the warmth of her surroundings, despite the desperate war that engaged them all. Among Nora’s effects was a gift tag in Mrs. Churchill’s own hand. The gift was a handbag. The reverse of the tag shows it was at Christmas. I also have a letter on Downing Street stationery dated Christmas Day, 1940. Entitled “To Nora,” it is signed by the seven attendants on the door of Number Ten. The Churchill’s warmth was shared by all the staff.

When my mother reached 90 in 2013, it became known to Prime Minister David Cameron that she was the only person still alive who had personally worked at Downing Street during the war. (She was a teenager in 1940; everyone else in the household was a lot older.) Mr. Cameron kindly invited us to Downing Street, where he and the resident historian wanted to hear her stories.

Of course, she was a very junior member of staff, not party to the great historic events we might have liked her to have been. But during our visit, it became clear to me that her experience too was part of history.

Everything Andrew Roberts writes about the Downing Street air raid is exactly as my mother remembered. She was able however to give Mr. Cameron a little more detail. When Churchill arrived in the  kitchen to order them to the shelter, Mrs. Landemare had resisted. She had a soufflé in the oven for the ongoing dinner party. It couldn’t possibly be left, she declared, air raid or not.

The Prime Minister was firm. Everyone must go. He actually stood at the door so that they all had to file past him on their way out. Nora was mortified, because in her words, “you never walked in front of the Prime Minister.” But he quietly waited there until he was satisfied that the room was empty. Thus Mr. Churchill saved their lives and, incidentally, my existence!

Mr. Henty is a retired school teacher and principal and the conductor of musical theatre and concerts. He passionately preserves his mother’s memories of working with the Churchill family, of which she was so proud.