Churchill in 1943 on National Health Insurance and Taxation 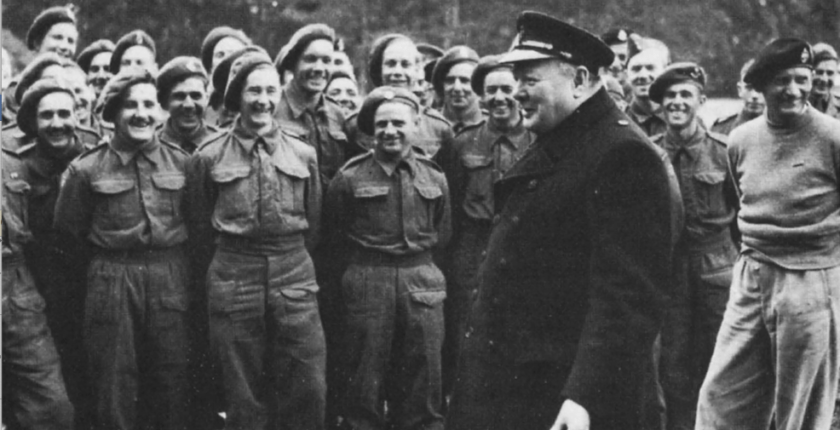 The Prime Minister with Field Marshal Montgomery visiting British troops near Caen on 22 July 1944, six weeks after D-Day. Apparently popular with squaddies, Churchill probably didn’t realize how many of them, a year later, would opt to Labour’s promises of insurance against want and illness, voting him out of office. (Hillsdale College Press)

I have been trying now for a good while to find proof that Churchill uttered these words: “You must rank me and my colleagues as strong partisans of national compulsory insurance for all classes, for all purposes, from the cradle to the grave.” While I’ve heard this phrase often, I wasn’t aware of the exact origin, and was surprised about how difficult it was to find an original source online. —J.S., Koblenz, Germany

This quote is part of a world broadcast, “A Four Year Plan,” which Churchill delivered on 21 March 1943. Significantly, it goes against the assertion that he thought little about domestic policy in wartime. The full text is available to readers via email to  [email protected]. Here is the paragraph in question:

The time is now ripe for another great advance, and anyone can see what large savings there will be in the administration once the whole process of insurance has become unified, compulsory and national. Here is a real opportunity for what I once called “bringing the magic of averages to the rescue of the millions.” Therefore, you must rank me and my colleagues as strong partisans of national compulsory insurance for all classes for all purposes from the cradle to the grave. Every preparation, including, if necessary, preliminary legislative preparation, will be made with the utmost energy, and the necessary negotiations to deal with worthy existing interests are being actively pursued, so that when the moment comes everything will be ready.

Also pertinent were his remarks later on in the speech about cost: which is of course still a debate in this field today:

This brings me to the subject of the burden and incidence of taxation. Direct taxation on all classes stands at unprecedented and sterilizing levels. Besides this there is indirect taxation raised to a remarkable height. In wartime our people are willing and even proud to pay all these taxes. But such conditions could not continue in peace. We must expect taxation after the war to be heavier than it was before the war, but we do not intend to shape our plans or levy taxation in a way which, by removing personal incentive, would destroy initiative and enterprise.

Churchill words, as always, must be tempered by the times in which he lived. As he told the Royal College of Physicians in 1944, medical discoveries were “the inheritance of all.”

He often stressed “the magic of averages” offered by insurance. On 3 July 1945, too late to affect the election (polling began two days later), he issued a Cabinet Paper calling on his colleagues to move forward on legislation for National Insurance and a National Health Service. What form they would have taken we’ll never know, since the Conservatives lost and Labour took over.

Churchill supported the National Health Service though he was not among its advocates. In the beginning everything was to be free, of course. Inevitably, costs began to rise, and the government introduced charges for spectacles and dentures. On 10 April 1951, Churchill protested the heavy government expenditures, suggesting economies to eliminate those charges to the citizens. This excerpt from his speech sounds a little familiar:

Those who hold that taxation is an evil must recognize that it falls upon this country in a most grievous manner at the present time, continually burdening the mass of the nation and continually clogging – or, at any rate, hampering our efforts. There is to be an increase of taxation. I am not at all concerned today to examine even cursorily the detailed proposals which the Chancellor has made, but taxation is to be increased; it is to be heavier still.

Churchill considered socialism incompatible with human liberty. He sought a middle way of ameliorating the life of the needy without confiscating the wealth of producers. This is a broad subject, explored in a pertinent book and several articles…