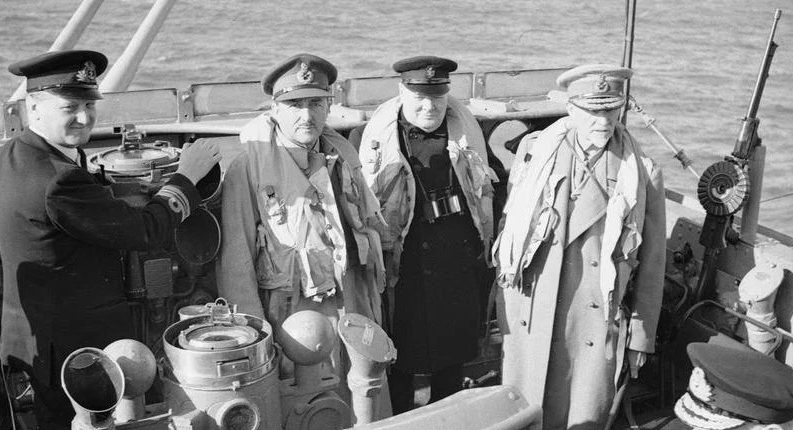 Field Marshal Sir Alan Brooke, with Churchill and Jan Smuts, en route to Normandy aboard HMS Kelvin, 12 June 1944. Far too much has been read into the Brooke-Churchill arguments in fraught moments of the war. “I do love him,” Brooke said, “but the day that I say I agree with him when I don’t is the day he must get rid of me because I am no use to him any more.” (Imperial War Museum) 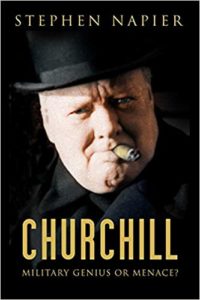 The first key to sales is an intriguing title and Mr. Napier succeeds admirably in that regard. But a reader expecting the “goods” will be rather surprised that the preamble and first chapter praise Churchill’s warnings of the need to rearm in the face of Nazi Germany, and his condemnation of the Munich Agreement. Napier then adds several straightforward chapters covering the early days of the war and Churchill becoming prime minister.

After the US enters the war, we get ten chapters which could be entitled “Allies at War with Each Other.” They cover the already thoroughly researched acrimonious relationship between the political and military leaders of Britain and America. Here Mr. Napier provides a highly readable narrative, albeit concise, given the space he allows himself.

We have snippets of what is to come in this part of the book, but only in the final chapter of the book does Napier release his slings and arrows. These include the following, along with the obvious rebuttals to them, most of which are hardly new.

“Churchill was a dictator in running the government.” This was said by Australian Prime Minister Robert Menzies after attending a Cabinet meeting. There is however a conflicting opinion from another Commonwealth premier, Mackenzie King of Canada. Having been told Menzies’ opinion, King wrote in his diary: “Throughout the morning, I listened to the discussion which I found carried on in an admirable manner.”

“Churchill caused the German invasion of Norway.” In February 1940 the German tanker Altmark, with 300 Allied prisoners of war, was boarded in Norwegian waters by the Royal Navy. To cries of “The Navy’s here!” its prisoners were released. Churchill, as First Lord of the Admiralty, had authorized the action. The successful outcome was a great boost to British morale, but hardly resulted in the German invasion of Norway. Records show that Hitler had determined his course of action as early as December 1939.

“Churchill gave short shrift to Hess, who was sent in on a peace mission by Hitler.” On 10 May 1941, Deputy Führer Rudolf Hess flew from Germany to Scotland. Prior to his departure he wrote to Hitler, advising of his intention to open peace negotiations with the British. Hitler reacted furiously, stripping Hess of his position and ordering him shot on sight. An embarrassed Hitler even had to assure Mussolini that no peace negotiations were contemplated.

“Churchill’s ruthlessness at Dieppe demonstrated his willingness to sacrifice men when required…although the Dieppe Raid continues to be surrounded by controversy…it is clear that it was ordered by Churchill for largely political reasons to make some gesture towards helping the Russians.” There is no argument against the need to encourage the Russians, who were hard-pressed by the Germans. But to state that Churchill knowingly sent the force, mainly Canadians, to be sacrificed is blatantly untrue. (See this reviewer’s article, “Dieppe: The Truth about Churchill’s Involvement and Responsibility.”)

“Had Churchill strongly advocated a landing in France in 1943…experts such as General Wedemeyer [U.S. War Planning Board] believed they would have been successful and the war could have ended a year earlier.” It remains speculative, we are told, how a 1943 landing would have fared (really?). But Churchill’s determination “to mount a campaign through Italy into Germany” delayed the cross channel invasion until June 1944. Had Churchill supported a 1943 landing, “there is no doubt it would have taken place as there would not have been the diversion of American resources to the Pacific theatre.”

Churchill never advocated invading Germany over the Alps, if that is what the author means by “through Italy into Germany.” And it is true that victory hinged on the D-Day landings. But they required due diligence and meticulous planning, and were not militarily feasible in 1943. It strains credulity to accept Wedemeyer’s opinion over that of Churchill, Roosevelt and the Joint Chiefs. Mackenzie King, talking with Eisenhower in January 1946, thought greatest thing that Churchill did was “holding back the crossing of the Channel and thereby saving many lives….Eisenhower said [that] Churchill had the larger vision on some things.”

Napier implies that the policy of unconditional surrender, affirmed by Roosevelt and Churchill at Casablanca in January 1943, was unwise: “…it remains a subject of speculation as to how any landings in France in 1943 would have fared [but] experts such as Wedemeyer believed they would have been successful and the war could have ended a year earlier, provided the political question of unconditional surrender was resolved.”

Unconditional surrender was demanded because it would have been unconscionable for Hitler and his fellow mass murderers to have been treated with other than full justice. Nevertheless, Churchill and Roosevelt announced, “unconditional surrender means not the destruction of the German populace, nor of the Italian or Japanese populace, but does mean the destruction of a philosophy in Germany, Italy, and Japan which is based on the conquest and subjugation of other peoples.” It was false, Churchill wrote to Harry Hopkins two years later, to suggest that the demand for unconditional surrender prolonged the war: “Negotiation with Hitler was impossible. He was a maniac with supreme power to play his hand out to the end, which he did; and so did we.” (Quoted in Martin Gilbert, Road to Victory 1942-1945, 310.)

This speculation about Churchill was made by Field Marshal Sir Alan Brooke (later Viscount Alanbrooke), who was appointed Chief of the Imperial General Staff in December 1941. Out of context, it sounds worse than it was. Brooke is quoted on the jacket: “Without him England was lost for a certainty, with him England has been on the verge of disaster time and again…Never have I admired and disliked a man simultaneously to the same extent.” That partly explains Brooke’s true attitude. A difficult boss, Churchill continually urged aggressive action. Many of his ideas were impractical, and it was Brooke’s job to say so. But there was much more to their relationship.

Joan Bright, personal assistant to Churchill’s chief military assistant General Sir Hastings Ismay, recorded a revealing incident in March  1944: “Brooke in the company of other ministers was far more rude to the P.M. than he had any right to be—and Churchill was shocked. He broke up the meeting and said to Ismay: ‘I have decided to get rid of Brooke. He hates me. You can see the hate in his eyes….’ Ismay left to see Brooke and said: ‘The P.M. is frightfully upset and says you hate him.’

Whereupon Brooke said ‘I don’t hate him. I adore him tremendously; I do love him, but the day that I say I agree with him when I don’t is the day he must get rid of me because I am no use to him any more….’ Ismay went back and told Churchill what had been said and his eyes filled with tears: ‘Dear Brookie.’”

That little recollection packs more insight into the truth than all the speculations of revisionist historians born and unborn. What we have here, alas, is just another volume aiming to besmirch Churchill with unjustified conclusions.

Mr. Reardon is a director of the International Churchill Society of Canada and author of Winston Churchill and Mackenzie King, So Similar, So Different. His other articles for the Churchill Project are “Winston Churchill as Barbaric Monster” and “Dieppe: The Truth about Churchill’s Involvement and Responsibility.”