Winston Churchill as Barbaric Monster in the Toronto Star 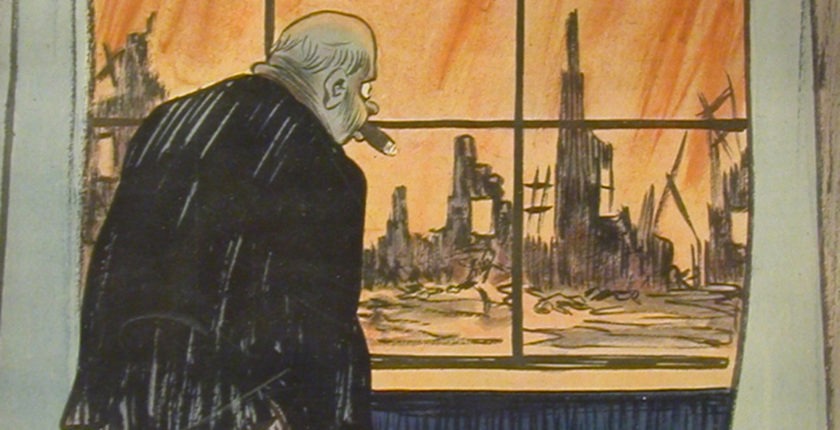 From the German propaganda magazine Lustige Blätter, Berlin, 15 November 1940: The Toronto Star’s opinion of Winston Churchill is not exactly new one.

It may not be extraordinary, or even unique, but Canada’s largest newspaper, the Toronto Star, sees fit to employ a “Race and Gender columnist.” One can imagine the result of that. On March 9th said columnist, Shree Paradkar, addressed the Oscar award Gary Oldman for playing Churchill in the movie Darkest Hour. Ms. Paradkar asked: “When will there be a film on Winston Churchill, the barbaric monster with the blood of millions on his hands?

Paradkar and the Star level three major accusations and I will address each separately, along with a Churchill quotation of some interest, since Paradkar badly misrepresents it.

First, in the midst of total war, victory takes priority. Second, the Star charge is without merit. British War Cabinet Papers of 8 October 1943 include these orders, which Churchill sent to Lord Wavell, the new Viceroy of India: “The hard pressures of world-war have for the first time for many years brought conditions of scarcity, verging in some localities into actual famine, upon India. Every effort must be made, even by the diversion of shipping, urgently needed for war purposes, to deal with local shortages.” Significant aid subsequently arrived. Documents that prove this are in The Churchill Documents, vol. 19.1 I will not repeat them, since they are summarized in “Did Churchill Cause the Bengal Famine?” on this website.

Ms. Paradkar obtained her information from Churchill’s Secret War by a non-historian, Madhusree Mukerjee. That book was carefully reviewed by Arthur Herman, author of Gandhi & Churchill, a nominee for the Pulitzer Prize. “Far from seeking to starve India,” Mr. Herman concluded, “Churchill and his cabinet sought every way to alleviate the suffering without undermining the war effort.”

The Star: “[People] can’t stem the drip, drip of blood from [Churchill’s] hands. They can’t hide tens of thousands of Kenyans who were rounded up in concentration camps called ‘Britain’s Gulags’ under his orders, where thousands were tortured and killed for rebelling against British rule.”

Churchill visited Kenya in 1907, publishing a travelogue, My African Journey, in 1908. In Nairobi, white settlers told him they would “make East Africa a white man’s country.” Churchill remonstrated. How could they do that in a land of 2500 whites and four million Africans?2 His unfashionably liberal ideas had not changed since he had argued for native rights with his Boer captors in South Africa eight years earlier.

Starting in 1948, Britain’s Colonial Office began to broaden Kenya’s Legislative Council. When Churchill returned to power in 1951, Africans, Asians and Arabs had achieved parity (14-14) with whites. But the Governor remained white, and native Africans did not get the vote until 1957. The terrorist Mau Mau faction had emerged, largely among the Kikuyu tribe, calling for the expulsion of all whites and replacing Christianity with paganism and witchcraft.

Mau Mau activities were “almost beyond belief, the burying alive of elderly Britons being only a minor manifestation,” wrote Churchill’s private secretary. “The Press description of them as ‘bestial’ was quite wrong; no animal behaves like that.” The Mau Mau oath was unfit for publication, but Churchill posted a copy in Parliament: “No one could have made it up if he had tried,” he said. “It is incredibly filthy. It was certainly calculated to impress the recipient.”3

Impress it did. Pleasing the usually peaceful Kikuyu, the British had prevented the Masai from burning their villages and abducting their women. But now Kikuyu were forced to take the Mau Mau oath or be brutally killed. The terrorists murdered eighteen blacks for every white.4

Repressive measures were instigated, and there is no doubt that some were brutal, though greatly exaggerated by Mau Mau sympathizers and the colonial press.5 (Historians have noted the preponderance of newspapers in Britain’s African colonies, and their remarkable degree of press freedom.)6

Visiting Nairobi, Oliver Lyttleton, Churchill’s admirable Colonial Secretary, spoke to Kenya establishment with “brutal candour.” Sixty thousand Europeans, he told them, cannot expect to hold all power while excluding Africans. That would only lead to explosions and bloodshed.

This time, he said, Britain will help put it down. But in the future, “you must turn your minds to political reform, and to measures which will gradually engage the consent and help of the governed.”7

What about Churchill, the barbaric monster? The Churchill Documents contain only two Churchill comments on the Kenya rebellion, detailed on this website. Both embraced reconciliation and avoidance of bloodshed. “Care should be taken,” he said in 1953, “to avoid the simultaneous execution of any large numbers of persons who might be sentenced to death by these courts.”8 Note his stress on court sentences, not summary executions.

Lyttleton agreed: “I tried hard to get the other races to accept one more African in the Ministry,” he wrote, “but to have insisted would have been to break down the agreement which I had secured. Politics are the art of what is practicable.”9

The art of the possible did produce independence for Kenya in 1963. The country’s first President, Jomo Kenyatta, told his country: “We must have no hatred towards one another. Mau Mau was a disease which had been eradicated and must never be remembered again.”10

The Star: “They can’t hide the bodies of the Greek civilians who were celebrating German withdrawal in 1944, but were killed by the British army because Churchill thought the communist influence on the Nazi resisters—who had allied with Britain.”

Unlike Ms. Paradkar’s other sweeping accusations, this is a new entry in the Churchill-as-Monster sweepstakes. Understanding it requires far more background than she cared to provide.

Several different guerrilla groups resisted the German occupation of Greece in World War II. The largest was the Communist EAM/ELAS; the second, much smaller, was EDES (Democrats). There were many instances of armed conflicts between the two factions in which civilians died, long before the British arrived on the scene. However, with the impending withdrawal of the German forces in September 1944, the rival factions met in Caserta, Italy. EAM/ELAS agreed to recognize a Government of National Unity. Pending an election, the interim prime minister would be Georgios Papandreou. German resistance groups were united under the command of a British Officer, General Ronald Scobie.

In September 1944, Churchill visited Stalin in Moscow. One matter of concern was Greece after German withdrawal. In their much-criticized “Percentages Agreement,” Stalin granted Britain and America a 90% interest in Greece, with Russia having predominant interest elsewhere in eastern Europe. Allied forces entered Athens in mid-October. Following the Caserta Agreement, Papandreou demanded the disarmament of resistance groups. In response, six EAM/ELAS ministers resigned from the government. In December they inspired a general strike of 200,000 workers. British tanks arrived and fighting broke out, each Greek faction claiming the other had started what soon became a civil war.

On 4 December Churchill telegraphed Scobie: “Do not hesitate to fire at any armed male in Athens who assails the British authority or Greek authority with which we are working. …Do not hesitate to act as if you were in a conquered city where a local rebellion is in progress. …It would be a great thing for you to succeed in this without bloodshed if possible, but also with bloodshed if necessary.”11 (Let us try to imagine Stalin, instructing his generals to dominate Romania “without bloodshed if possible.”)

Churchill was adamant about the rightness of his course. “The last thing that resembles democracy is mob law,” he told the House of Commons. He famously added: “Democracy is no harlot to be picked up in the street by a man with a tommy-gun.”12 Churchill prevailed in the House, but the U.S. State Department was markedly critical. This, he later wrote, “they in turn were to regret, or at least reverse, in after years.”13

With no peace in sight, Churchill decided to seek it on the spot, disappointing his wife and family by flying abruptly to Athens on Christmas weekend.14 Personal courage was part of Churchill’s DNA, but for a man of seventy, flying into a hazardous situation in search of a seemingly impossible peace showed an extraordinary degree of self-sacrifice and dedication.

On Christmas Day, Churchill, Scobie and the British authorities invited the contending groups, including Communists, to a peace conference. They agreed to form an all-Party Government led by the respected Archbishop Damaskinos. Churchill told them: “We British…will leave you Greeks to your own discussions under this most eminent and most venerable citizen, and we shall not trouble you unless you send for us again.”15

Churchill rose to leave, shaking hands with all the delegates, including the Communists. While fighting continued for awhile, the ELAS/EAM signed a truce on 11 January 1945. This was not the end of Communist activities, but they were never able to obtain control, and Greek democracy survived.

Churchill’s actions toward Greece constitute, in retrospect, a contribution to liberty. When we compare the fate of nearby countries like Bulgaria, which suffered for forty-five years under Communist rule, Churchill’s effort for Greek freedom was one of his greatest achievements.

The Star: “Oldman might as well have danced on three million dead bodies, many of whose loved ones were too weak to cremate or bury them. Such tributes for a heinous white supremacist who once declared that ‘Aryan tribes were bound to triumph.’” [Churchill’s actual words were “the Aryan stock is bound to triumph,” in a 1901 interview.]16

(The Toronto Star doesn’t inform us that Aryan horseman warriors from Central Asia migrated into the Indus Valley in the third millennium B.C. They were “as arrogant as they were tough,” wrote historian Arthur Herman.17 “Their very name, Arya, meant ‘master’ or ‘noble.’” They evolved into four classes, led by the Brahmins. Ironically, in view of the Star’s charges, “the Aryan stock” is today the dominant demographic group in India. Three centuries later, Hitler appropriated the word and gave it a bad name.)

The popular excuse to remarks like this one by the young Churchill is that “everyone was racist in those days.” That is not a good defense, because in Churchill’s case, this is not the singular feature. Wrote Hillsdale College President and Churchill scholar Larry Arnn:

We spend a lot of time arguing that Churchill was remarkable. Then when something comes along that we do not like, we excuse it or explain it as typical of the age. I do not think Churchill was typical of the age on this question. Lincoln, for the slaves, and Churchill, for the Empire, believed that people of all colors should enjoy the same rights, and that it was the mission of their country to protect those rights. Therefore, to say that Winston Churchill was “a man of his time,” or that “everyone back then was a racist,” is to miss the singular feature.

Another thing to remember was that Lincoln and Churchill were political men. Also they were democratic men. They needed, and thought it was right that they needed, the votes of a majority. If they lived in an age of prejudice (and every age is that) then of course they would be careful how they offended those prejudices.18

Mr. Reardon is a director of the International Churchill Society of Canada and author of Winston Churchill and Mackenzie King, So Similar, So Different.