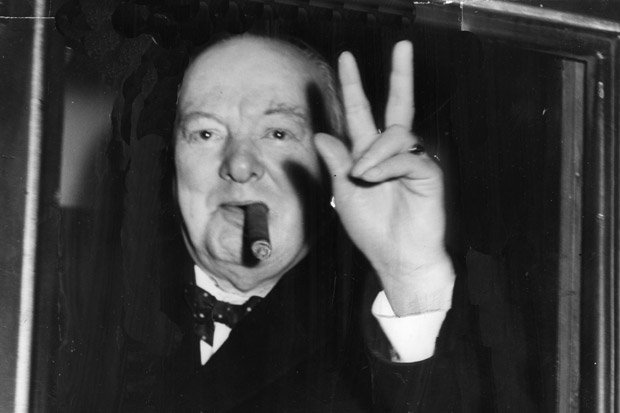 Requiem for Socialism and the Iron Curtain: Churchill’s Relevance to the Challenges of the Present

Previously on this occasion I displayed to our assembled guests a cartoon by Conrad. As you may suspect I am seldom in sympathy with anything of Conrad’s. But this time I was. Beneath the drawing, as I recall, were the words, “From Stettin on the Baltic, to Trieste on the Adriatic, an Iron Curtain has descended across the continent.” The drawing itself displayed a crumbling wall, and behind it the smiling face of our hero, flashing the famous victory sign.

The policy of containment of Communism—now on the eve of victory—had its origin in Churchill’s speech at Westminster College, Fulton, Missouri, in 1946. Known widely as the “Iron Curtain speech,” it was entitled  by Churchill “The Sinews of Peace.” In its wake, Churchill was condemned as a war-monger. We see now, after may long, weary years, his speech title triumphantly vindicated.

With breathtaking swiftness we have witnessed the disintegration of the Communist governments of eastern Europe. We have seen the reunification of Germany, and its inclusion in NATO. A year ago we could hardly believe the USSR would give its consent to that reunification. It seemed that Moscow would never agree to Germany in NATO. Now we see a disintegrating USSR—hardly able to feed itself—turned almost wholly inward, its President going hat in hand to Berlin, begging for aid. Soviet troops in eastern Germany are not there to serve the Warsaw Pact—which no longer exists—but because their government has no jobs, housing, or even food for them at home.

When has the wheel of fortune turned more rapidly? When were the principles of political and economic freedom so vindicated? Remember, Churchill in 1920 attempted in vain to “strangle Bolshevism in its cradle.” His warnings against Hitler went unheeded until Hitler was on the verge of conquering Europe. Then his war leadership alone prevented Hitler’s victory until those nations hitherto blind to their danger joined Britain and its Empire-Commonwealth in the battle.

It is ironic that Churchill’s greatest fame is the result of the fact that his wisdom was disregarded. He is much less well known as architect of the Cold War. Yet the Truman Doctrine, NATO, the Marshall Plan, and the European Community all flowed from the speeches he gave as Leader of the Opposition between 1945 and 1951.

Churchill’s legacy includes his philippics against socialism during this same period, which are no less trenchant than those against fascism and Communism. Consider the following excerpts from a speech in the Commons in 1949:

I was brought up to believe that taxation is a bad thing, but the consuming power of the people a good thing. … that trade should be regulated mainly by the laws of supply and demand and that, apart from basic necessaries in great emergencies, the price mechanism should adjust and correct undue spending at home. … I was also taught that it was one of the first duties of Government to promote that confidence on which credit and thrift…can alone stand and grow. These processes, working freely within the limits of the well-known laws for correcting monopoly…would produce a lively and continuous improvement in prosperity. I still hold to those general principles.

Socialists [on the other hand] regard taxation as good in itself and as tending to level our society….The Socialists rejoice in government expenditure on a vast scale…and increased consuming power, except by the government itself…is an evil which must be curbed by every form of government intervention….Everything possible is done to discourage and stigmatize the inventor.

The Chancellor [of the Exchequer] speaks in slighting terms of profit earners…. What a lot of contempt he put into it—“profit earners.” There was an old Gladstonian expression: “Let the money fructify in the pockets of the people.” That is regarded as a monstrous device of a decadent capitalist system…. I want to ask how are the Government going to restore confidence and credit when they show themselves in every mood and action the enemy of wealth gathered, accumulated or inherited in private hands; when they penalize enterprise and deny thrift and good housekeeping their due reward?

This puts us in mind of that dictum concerning property asserted by James Madison, when he said, in the Tenth Federalist, that “the protection of different and unequal faculties of acquiring property [is] the first object of government.” According to Madison, the U.S. Constitution provides equal protection to unequal abilities. This is surely Lincoln’s meaning in 1864: “Property is the fruit of labor; property is desirable; it is a positive good in the world. That some should be rich shows that others may become rich, and hence is just encouragement to industry and enterprise.”

Unfortunately, the events of 1989 were not an unambiguous triumph for the principles that link democracy and capitalism. President Bush’s budget deal was a sorry retreat from the anti-socialist tradition which is at the core of Anglo-American greatness, and which has been so gloriously upheld in recent years by both Ronald Reagan and Margaret Thatcher.

Something similar seems, alas, to be occurring also in Churchill’s homeland. Margaret Thatcher’s struggle to break the power of the unions was worthy of the traditions of Lincoln and Churchill. Without her victory in this struggle, privatization and lowered taxation—the revival of the British economy and the British spirit—would not have been possible. As to her dismissal by her own party, we can only hope that Churchill’s quotation from Plutarch, and morrow of his own defeat in 1945, will yet apply: “Ingratitude toward their great men [or women] is the mark of strong peoples.”

Problems of the Present

Now however we have other immediate problems of no small magnitude. Abraham Lincoln once declared, “Stand with anybody that stands Right. Stand with him while he is right and part with him when he goes wrong.”

From 1905 Churchill belonged to that small but influential circle of Christian Zionists in Britain. As Colonial Secretary after World War I, he put into effect the Balfour Declaration, which had promised a Homeland for the Jews in Palestine. A joint resolution of the United States Congress endorsed that Homeland, now Israel, on 21 September 1922. Deep are the Churchillian roots of American policy in the Middle East.

I ask you to join, with our toast to Sir Winston Churchill, one to his successor and emulator, Margaret Thatcher. Also, to the pride of our nation, the men and women deployed in the Middle East. And to their Commander-in-Chief, the President of the United States.

Dr. Jaffa (1918-2015) was Professor Emeritus at Claremont McKenna College and Claremont Graduate University. He was a distinguished fellow of the Claremont Institute. A lasting friend of Hillsdale College, he was also a dedicated Churchillian. He writings are prominent on Aristotle, Thomas Aquinas, Abraham Lincoln, Thomas Jefferson, Leo Strauss, American constitutionalism, and natural law.