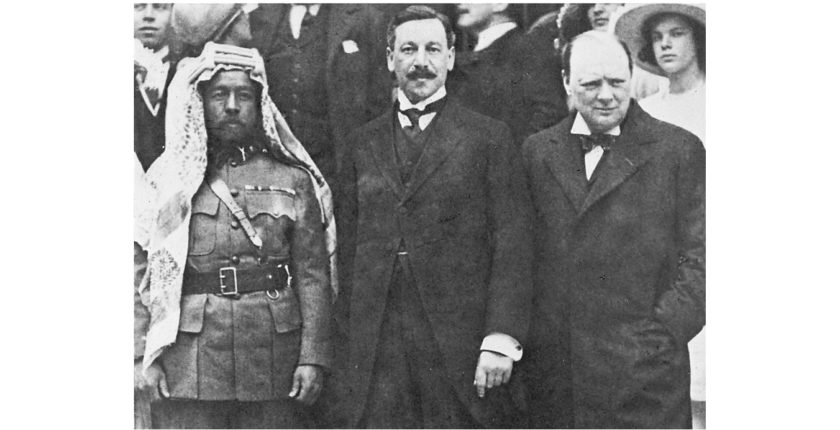 What is the veracity of this alleged quote by Churchill, which has many versions? The most common is from The New York Times: “In his later years, he liked to boast that in 1921 he created the British mandate of Transjordan, the first incarnation of what still is the Kingdom of Jordan, “with the stroke of a pen, one Sunday afternoon in Cairo.” The source cited is “Borderlines and Borderlands: Political Oddities at the Edge of the Nation-State,” edited by Alexander C. Diener and Joshua Hagen, page 189.

I ask because versions of this quote are repeatedly cited by anti-Churchill wallahs as proof for when they indict him as the culprit for the state of the Middle East today. They never mention that Jordan is comparatively an oasis of serenity relative to its neighbours. Their point is that Churchill created artificial states to (pick your poison) steal oil, perpetuate British control, create pro-Western dictatorships, keep the Muslim world in a state of constant unrest etc.  Any information on this would be most useful. —A.M., Delhi

A: Not proven but not out of character

It is the kind of wisecrack Churchill might well have let fly to a colleague, but we can find no published source for “stroke of a pen” relative to Transjordan, or the Kingdom of Jordan. Of course, Jordan was one of the creations of the 1921 Cairo Conference, presided over by Churchill. Good accounts are in David Stafford, Oblivion or Glory: 1921 and the Making of Winston Churchill (2019) and Martin Gilbert, Winston S. Churchill, vol. 4, World in Torment 1917-1922.

The quote you cite may be a muddled version of what Churchill actually said in Parliament on 24 March 1934:

I have no hostility for the Arabs. I think I made most of the settlements over fourteen years ago governing the Palestine situation. The Emir Abdullah is in Transjordania, where I put him one Sunday afternoon at Jerusalem.

Churchill didn’t have great hope for liberty in the Arab states he set up in 1921. His highest hope was in what became Israel. Nevertheless, he thought, the West must do what it could, hoping to use its influence for good. After all, that influence is better than some of the other influences that occur from time to time. Suppose the Soviet Union had reorganized the Middle East in 1921?

P.S.: Another stroke of a pen

Sometimes a chase through the Churchill canon yields unrelated but rewarding results. In searching for “stroke of a pen,” I came across this passage by historian Arthur Herman, in his excellent book Gandhi & Churchill, page 497. This will be of interest to you and other Indians laboring in the Churchill vineyard in search of truth:

For every disgruntled or discouraged subaltern who joined Japan’s puppet Indian National Army, a dozen KCIO and VCOs served with distinction on every front in the British war effort, from Burma and Eritrea to North Africa and Italy. And the minister of war who created the KCIOs in 1920 had been Winston Churchill. Without realizing it, he had at the stroke of a pen secured India as part of the future Allied cause and created independent India’s military legacy. Churchill never grasped the full magnitude of what he had done, but Gandhi nearly did. Many times over the years he had spoken of brave Indian soldiers who would defend their country and then return home to carry the future burden of freedom.”