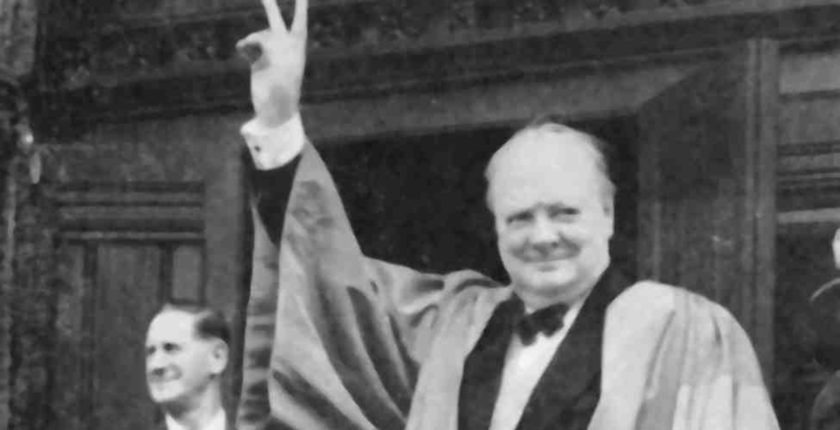 Churchill in academic robes after receiving an honorary Doctor of Laws degree at Harvard, where he delivered one of his greatest speeches, “Anglo-American Unity,” 6 September 1943. (Behind him is his longtime bodyguard, Inspector Thompson.) Three years later at another degree ceremony in Miami, he quipped: “I am surprised that in my later life I should have become so experienced in taking degrees, when, as a schoolboy I was so bad at passing examinations.”

Q: ​The historian Robert Blake suggested that there were “great gaps” in Churchill’s knowledge, but doesn’t say what they were. Any thoughts? —M.H., Rye, N.Y.

A: A colleague who responded to this question offered a novel parallel: Dr. Watson’s first meeting with Sherlock Holmes, in the novels of Arthur Conan Doyle. Impressed by Holmes’s immense range of knowledge, Watson is amazed to find that Holmes does not know that the earth travels around the sun….

Holmes: “You appear to be astonished. Now that I know it, I shall do my best to forget it.”

Holmes: “You see, I consider that a man’s brain is originally like a little attic, and you have to stock it as you choose. A fool takes in all the lumber of every sort that he comes across, so that the knowledge which might be useful to him gets crowded out….It is of the highest importance, therefore, not to have useless facts elbowing out the useful ones.”

Watson: “But the Solar System!”

Holmes: “What the deuce is it to me? You say that we go round the sun. If we went round the moon it would make not a pennyworth of difference to me or to my work.”

I’ve often dined out over Holmes’s remark, though in a way it perplexed me. Surely a detective’s deductive reasoning might at some time require knowledge of the Solar System? For instance, would Holmes not have needed to realize he must set his pocket watch ahead for the fateful final showdown with Professor Moriarty at Reichenbach Falls?

But Robert Blake was referring to far more serious gaps in Churchill’s knowledge, particularly the technical—where his friend Professor Lindemann, “The Prof,” filled a critical need. (Churchill said that Lindemann had the skill of reducing the most complicated scientific theses, like the Quantum Theory, to terms lay people like him could easily grasp, in the space of a paragraph.)

Churchill, it appears, took Holmes’s view that the mind is not infinitely expandable. Time and again, he exhibited vast gaps in economic and financial knowledge, which his friends Bernard Baruch and Brendan Bracken made up for in his personal affairs. David Lough’s comprehensive book No More Champagne recounts the many occasions when his friends’ counsel helped to salvage Churchill’s creaky finances.

Where Churchill’s lack of financial knowledge had serious implications for public policy was during his Chancellorship of the Exchequer (1925-29). The historian A.L. Rowse quoted him in 1930:  “Everybody said that I was the worst Chancellor of the Exchequer that ever was. And now I’m inclined to agree with them. So now the world’s unanimous.” Rowse commented:

There is something endearing about a head of that grim department who could say [such a thing] after dinner one evening. An economic historian of the period calls him dramatic, resourceful, ingenious. If the return to the Gold Standard at such a high parity was a mistake…Churchill’s instinct was rather against the measure, and in any other realm where he had confidence in his own judgment, he would have insisted on having his way—to the country’s advantage.1

Gordon Craig, in Robert Blake’s collection of essays, Churchill: A Major New Assessment, provides another interesting case of where Churchill’s knowledge was seriously deficient, yet did not affect the quality of his conclusions and actions. The case is Germany, during and after the First World War:

It is a curious fact that Winston Churchill, whose long career was so directly affected by events that occurred in Germany and whose place in history is impossible to define without reference to that country, knew very little about it in any formal sense. This is not said in derogation, for his relative ignorance served his people better than the prescriptions of those who pretended to be more knowledgeable in German affairs.

It is nevertheless worth noting that he had small acquaintance with the Germans and their land and their culture. His visits to Germany were rare and short (two before 1914 and then no more until a brief visit in 1932); his knowledge of German was virtually non-existent (“I’ll never learn the beastly language,” he said on the eve of the First World War, “until the Kaiser marches on London!”), and, unlike his colleague Haldane, he was unversed in German philosophy, literature, art, or—because his musical sense was not highly developed—music.

Nothing that he ever said or wrote indicated that he had any real understanding of the nature of the political process either under the Empire [Second Reich] or during the tragic days of the Weimar Republic. Even his knowledge of Germany’s history was partial and selective. In the social, economic, and intellectual history of the German states he showed little interest. It was—and this was, for the most part, true of his attitude towards other countries as well—only Germany’s role in foreign affairs, its role as a Great Power, and its relations with its neighbours and rivals that held his attention. (Emphasis ours.)

In a brilliant essay, Isaiah Berlin once pointed out that it would be idle to criticize Churchill for not possessing the gifts of the professional historian. His vision was always romantic, and in a real sense he saw history as a great Renaissance pageant, with the nations of the world standing out as strikingly differentiated images.2

Undoubtedly, readers will think of many other obvious gaps in Churchill’s knowledge. His salvation was that he studied when he had to. A very minor example was his interest in raising butterflies. Keyed up and interested, he applied himself and thoroughly mastered the subject. Ronald Golding, his Scotland Yard detective at the time, recalled an amusing episode when Churchill invited a butterfly breeder to consult with him on his scheme to reestablish butterflies at Chartwell after World War II:

Churchill took the breeder for a walk round the grounds and gave a general idea of his plans; the expert then gave advice and went into more technical details. Mr. Churchill said very little. Rather like a penny dropping in the butterfly man’s mind, you could almost see him thinking, “Ah, I’ve got the old boy. He’s not nearly as clever as I thought. This is one sphere in which I know a lot more than he does.” The butterfly man then became just the slightest bit patronizing and Boomph! Churchill came back at him with some very lucid comments showing that he was well acquainted with everything being said. The expert was visibly shaken and did not attempt to “talk down” again.

This pattern of conversation I’d noticed with other experts, and I can’t help feeling that Mr. Churchill pretended his ignorance to a certain extent, then came down like a ton of bricks if there was any attempt to patronize him.3

Churchill’s gaps in knowledge, and determination to pursue knowledge when he needed it, is perhaps not so extraordinary after all. Doesn’t this apply to us all in one way or another? Subjects that hold no interest bore us; subjects that fascinate us give us a thirst for knowledge. Margaret Thatcher and Ronald Reagan, Harry Truman and Abraham Lincoln, all exhibited great gaps of knowledge. But when it mattered, they sought out and grasped what they needed to know.

“The genius of Churchill,” said William F. Buckley, Jr., “was his union of affinities of the heart and of the mind. The total fusion of animal and spiritual energy.”

2 Gordon Craig, “Churchill and Germany,” in Robert Blake and Wm. Roger Lewis, eds., Churchill: A Major New Assessment of His Life in Peace and War (New York: Oxford University Press, 1993), 21. Note: first appearance of the “beastly language” quote was in Adam Sykes and Iain Sproat, The Wit of Sir Winston (London: Frewin, 1965), but no attribution was stated, and we cannot find it in any Churchill archive.

Featured Image: Churchill in academic robes after receiving an honorary Doctor of Laws degree at Harvard, where he delivered one of his greatest speeches, “Anglo-American Unity,” 6 September 1943. (Behind him is his longtime bodyguard, Inspector Thompson.) Three years later at another degree ceremony in Miami, he quipped: “I am surprised that in my later life I should have become so experienced in taking degrees, when, as a schoolboy I was so bad at passing examinations.”