“Churchill and the Jews” – by Michael J. Cohen 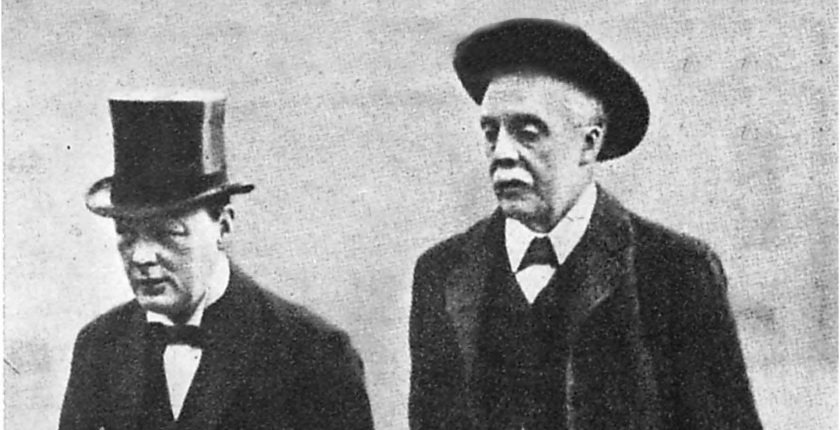 Michael J. Cohen, Professor of History Emeritus at Bar-Ilan University in Israel, first produced his study of Winston Churchill and his relationship to the Jews in 1985. He was the first historian to carry out a systematic study based on official documents and secondary sources not available to his only predecessor in the field, Oskar Rabinowicz (Winston Churchill on Jewish Problems: A Half-Century Survey, 1956). Cohen’s 2003 revised edition does not update the 1985 text, but includes a 26-page Afterword. The latter presents little new evidence, but is critical in detail of some of Churchill’s defenders, especially the official Churchill biographer, the late Sir Martin Gilbert (who, in 2007, published his own Churchill and the Jews: A Lifelong Friendship).

Self-consciously revisionist, Professor Cohen presents a far harsher judgment on Churchill’s professed support for Jewry and  Zionism than Rabinowicz, Gilbert, or Michael Makovsky (Churchill’s Promised Land, 207). Cohen concludes that there exists a “glaring anomaly” between Churchill’s war time expressions of sympathy for the Jews and the “absence, almost, of any practical measures on their behalf” (306).

This verdict does not withstand comparison with the evidence presented in Makovsky’s and Gilbert’s respective volumes. Cohen offers evidence that confirms his assertions, while often ignoring contrary evidence. For example, Cohen contends that Churchill could at least sometimes tolerate anti-Semitic sentiments, citing a 1931 letter Clementine Churchill sent to her husband which includes negative remarks about New York Jews (there is no known reply). However, Cohen does not mention the occasion in 1906 (recounted by Makovsky) when Churchill reproved his own mother for describing Count de Bendern as a “bastard Jew,” to which he replied that her remarks betrayed “a prejudice of v[er]y strong character” (Makovsky). He also criticized her in the following year for considering publishing an offensive, anti-Semitic anecdote in her memoirs (Gilbert).

Cohen omits evidence that puts episodes in a significantly different light. Thus, he faults Churchill for failing to back the Peel Royal Commission’s 1937 partition plan, which would have provided for a Jewish state in less than 20% of Mandatory Palestine. Cohen omits from his account that the revisionist Zionist leader, Vladimir Jabotinsky, had strongly urged Churchill not to support the Peel scheme because the Jewish state envisaged therein would have been exceedingly vulnerable to insecurity and assault––a judgment with which Churchill concurred. Cohen thus confounds Churchill’s genuine concern to win a viable Jewish state for Zionism with the Chamberlain policy of discarding Zionist commitments, which Churchill was resisting.

As he moves into the Second World War, Professor Cohen omits an array of evidence that tells in Churchill’s favor:

In January 1939, Churchill urged Albania to accept Jews fleeing Germany and Austria, but promising developments in this regard were abruptly ended by Mussolini’s invasion and occupation of the country the following April.

As First Lord of the Admiralty (1939-40), Churchill instructed Royal Navy vessels not to intercept ships suspected of bringing illegal Jewish immigrants to Palestine when he discovered that notice of this practice had been withheld from him by officials.

In February 1942, Churchill argued successfully in the War Cabinet––in the face of opposition from the new Colonial Secretary, his close friend, Lord Moyne––to release from internment approximately 800 Jewish refugees from the Darien II who had reached Palestine.

The same year, Churchill overrode Foreign Office objections to a proposal for permitting 5,000 Bulgarian Jewish children passage to Palestine. (The War Cabinet approved, but the move was blocked by German pressure applied on Bulgaria.)

In April 1943, Churchill pressured the Spanish ambassador to have the Franco regime reopen its border to Jewish refugees fleeing the Third Reich, something which occurred within a few days.

In July 1943, he vigorously opposed in the War Cabinet plans for British naval searches of ships to find illegal Jewish immigrants.

After the War Cabinet overrode Churchill by deciding to discourage illegal Jewish immigration to Palestine, Churchill devised a policy that bypassed it by permitting all Jews who might arrive in Palestine to stay there. One result was that, in early 1944, 6,000 Jews from Romania and Bessarabia were permitted to proceed to Palestine on British passports.

In 1943, Churchill succeeded in having the War Cabinet approve continued Jewish immigration to Palestine beyond the 1939 White Paper’s March 1944 cut-off, up to the full limit of the 75,000 permitted by the White Paper. (Due to the Nazi success in cutting off escape routes, this quota was not filled until after the War ended.)

In early 1945, Churchill tried to create a Jewish state within a larger Arab federation by unsuccessfully seeking to enlist, through among other things financial inducements, the support of Saudi King Ibn Saud.

In short, during the war, Churchill sought many avenues to provide refuge for Jews fleeing the Nazis, including in Palestine, and in the teeth of great opposition from virtually all of his officials. Indeed, such was the perception of Churchill’s solicitude for Jews among officials that, on at least two occasions, callous members of his own inner staff withheld from him Jewish requests for fear he would respond positively to them.

It is true that the results of Churchill’s record of persistent, often lone, activism on behalf of Jews and Zionism within the government he headed were relatively meager, but the record shows that this was not for want of trying.

For all this, Cohen does present some compelling evidence that attenuates Churchill’s record. In particular, his discussion of the failure to bomb the railway lines to Auschwitz (or the camp itself) in July 1944, when a detailed report of the mass-murder of Jews there reached London, is far more detailed than that of either Makovsky or Gilbert.

Cohen insists that despite Churchill’s initial, prompt authorisation to the Foreign Secretary, Anthony Eden, for military action, he failed to follow up, insist upon action, or at least discover why none had been taken (other than passing on the request to the Americans, who repeatedly rejected it). Cohen demonstrates that Churchill was then largely preoccupied with the provision of substantial Allied air support operations to the besieged Polish Home Army in Warsaw, which ironically involved many flights of similar range, some over the general area of Auschwitz itself (294-305).

Here too, however, Cohen ignores the facts that, with his instruction to bomb, Churchill bypassed the Cabinet and told Eden to invoke his name if necessary to spur action. Churchill worked for a tripartite allied declaration on the deportations (“I am entirely in accord with making the biggest outcry possible”) and called on neutral embassies in Budapest to issue protective papers to Jews. These actions certainly saved lives.

Cohen dismisses Churchill’s reaction to the news of the Auschwitz killings (“probably the greatest and most horrible crime ever committed in the whole history of the world”) as a mere retreading of something Churchill said of the Turkish massacres of Armenians during the First World War–but this is not to be found in his writings, speeches or private papers. This mistake and these omissions do not affect Cohen’s judgment on the question of bombing, but do demonstrate that Churchill had not dropped the issue, let alone from indifference. Quite the contrary: at a time when the Allied expeditionary force was bogged down in Normandy and Germany had renewed attacks on London with newly-developed rockets, they show him to have been actively concerned. (In subsequent publications, Cohen has gone further, claiming Churchill repudiated the proposal to bomb, something not borne out by the two Churchill letters he cites in support.)

“Too Easy to Be Good”

To prove his case, Professor Cohen would need to produce new evidence compelling a reassessment, as well as to debunk or reframe the countervailing evidence that has since emerged in Makovsky and Gilbert’s respective accounts. While he has been increasingly unsparing of Gilbert’s scholarship on the subject in recent years, he has yet to produce this critical scholarship himself.

As it stands, Churchill and the Jews offers a wealth of detail and analysis with some thought-provoking arguments and it scores a few hits. But it is ultimately defective in its judgment and marred by the prosecutorial tendency of discounting alternative interpretations of the evidence.

Before the Second World War, Prime Minister Stanley Baldwin said that if a war broke out, “I should like to see the Bolshies and the Nazis doing it.” Churchill’s reaction fits well this book: “Too easy to be good.”

Daniel Mandel is a former Fellow in History at Melbourne University and author of H.V. Evatt & the Establishment of Israel (Routledge, London, 2004).

For a thorough study of these subjects and more, see Ronald I. Cohen’s two-part article, “Churchill, the Jews and Israel.”