“Churchill and Malta” – by Douglas Austin 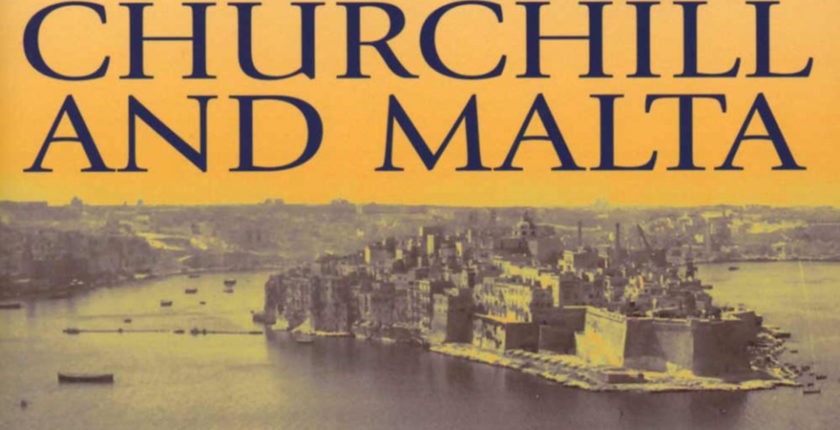 This is the third of the late Douglas Austin’s three books on the strategic Mediterranean island, the others being Malta in British Strategic Policy, 1925-1943 (2004); and Churchill and Malta’s War, (2010). Although they have inevitable overlaps, each book pursues a separate theme, and all are welcome contributions to the scholarship on Churchill and World War II.

Herein Austin chronicles Churchill’s relationship with Malta from his first encounter, when, as a young subaltern on his way to India in 1896, he sailed past the island and gazed at it through a telescope. Churchill was to make six visits to Malta in the course of his lifetime, spanning most of his career and key events in Maltese history—constitutional and military. Austin uses these visits as an artful device to weave together the personal and the historic, helping the reader to follow the overarching story.

Malta began as a small part of Churchill’s life, with an insignificant place in British war strategy. During World War II, it became one of Churchill’s central concerns, playing a critical role. Austin maintains that had Malta not held out, preventing the Germans in North Africa from being adequately supplied—or even from using Malta as a base themselves—the negative impact on the allied war effort would have been “incalculable.”

On his first call in 1907, Churchill was Under-Secretary of State for the Colonies in the Liberal government of Sir Henry Campbell-Bannerman. He became acquainted with Malta’s desire for a new constitution, providing the islanders with local self-government, which he supported. Austin quotes extensively from Churchill’s memorandum home, which he uncovered in the archives.

In 1912, as First Lord of the Admiralty, Churchill traveled to Malta to confer with Lord Kitchener about security in the Mediterranean. By this time British-German naval rivalry, already intense, had been heightened by the proposed German Naval Law. As a member of the Committee of Imperial Defence (CID), Churchill made himself unpopular amongst his governmental colleagues for arguing against the reinforcement of Malta in favor of the North Sea. All this began to change with his next trip in 1913. By then, as First Lord of the Admiralty, he had overseen the decisions to build a squadron of powerful new battleships and to switch from coal to oil. After this trip he would also establish a naval air base on Malta.

As Colonial Secretary in 1921, Churchill had put the final touches on Malta’s new constitution, although the road ahead in this regard—outside Churchill’s purview—was to be rocky. By 1927, when Churchill made his fourth visit to Malta, and met Mussolini on his way home, much had transpired. The British had chosen not to renew the Anglo-Japanese Treaty, and had decided to build a major new naval base in Singapore. Malta was from where reinforcement of the new base would come; it was Britain’s principal base outside home waters.

Mussolini’s attack on Abyssinia in October 1935 brought Malta and the Mediterranean to the fore of British concerns. Fears mounted that the Italians might invade the island. Austin does not exempt Churchill from criticism for his support of the government’s tepid handling of the crisis, but he argues that Churchill did so because of British naval weakness. Austin further contends that after the British declaration of war on Italy in May 1940, Churchill never wavered, first refusing to negotiate with Mussolini, then insisting that Britain hold Malta at all costs.

Churchill’s attention remained riveted on the island until victory in North Africa and the Middle East in 1943. He then visited the island twice: in November 1943, on his way to meet Roosevelt in Cairo; and in January 1945, en route to the Yalta Conference. It was at this meeting, with Roosevelt at Valletta, that Churchill’s aides had a premonition of Britain’s—and Churchill’s—eclipse in Roosevelt’s mind. There was no interest on the American side in preparing a joint position in anticipation of the forthcoming Yalta conference with Stalin.

The term “special relationship” in the title of this book is more often used to describe British-American relations. Churchill, we know, had a deep emotional attachment to the United States. He believed in the importance of Anglo-American friendship for the security of the world. Yet the term equally describes Austin’s theme that Britain and Malta had a special relationship: emotional, political and military. They were both island peoples, with all the protections, connections—and dangers—such geography brings.

In his memoirs, his doctor Lord Moran recalled Churchill’s agonizing about Malta to the point of tears, knowing how it had held out against two great sieges. As with the British people, Churchill drew inspiration from Malta’s people. His powerfully worded messages to them, and to those who served on the island, conveyed his respect and concern. They returned his deep affection, mobbing him on his visits in 1943 and 1945. Both during and after the war, Churchill intervened in decisions to insist they receive proper reconstruction funds. Their regard is demonstrated by the bust of Churchill standing in the gardens above the Grand Harbor, which was presented by the people of Malta on the occasion of his 80th birthday.

There is another special relationship in this book: that of the author with Malta, where he was born while his father was serving there in the Royal Navy. Austin died recently. We are fortunate that after his retirement from a career in banking and investments, he chose to write such scholarly books on Malta’s role in the 20th century. All his works broke new ground, offering new information, and a chance better to assess our understanding of Malta’s noble role.

Dr. Nutter is Senior Associate Dean and Professor of Practice, The Fletcher School of Law and Diplomacy, Tufts University.