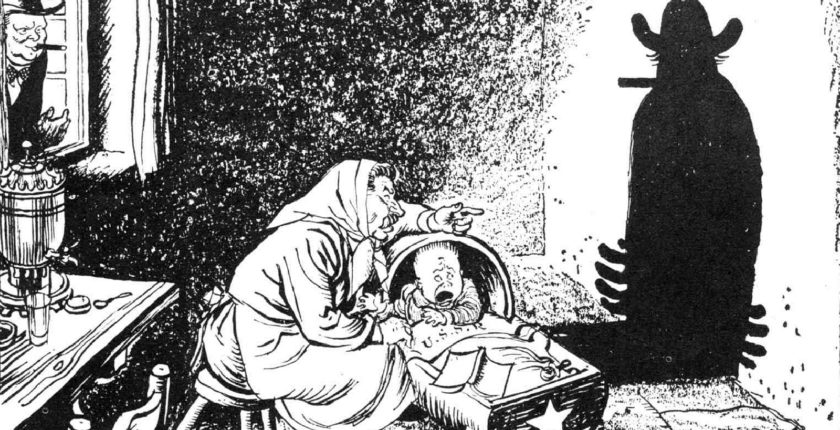 “Beware the Bogeyman”: 13 March 1946, a newspaper cartoon in the wake of popular uproar over Churchill’s “Iron Curtain” speech the week before; a few years later, there was less talk of false alarms.

For my new book, Sevastopol’s Wars: The Crimea from Potemkin to Putin, I have vainly tried to find an authoritative reference to the oft-cited quotation, “Bolshevism must be strangled in its cradle,” or “the foul baboonery of Bolshevism,” usually noted for early or mid-February 1919. It is not contained in his famous Bolshevik Menace speech of 11 April 1919, published in Robert Rhodes James’s volume, Churchill Speaks.—Major General (Ret.) Mungo Melvin CB OBE, President, British Commission for Military History.

Churchill Speaks, which omits Churchill’s “foul baboonery” speech, is a one-volume abridgment of the Rhodes James Winston S. Churchill: His Complete Speeches 1897-1963. The original eight-volume work does carry the speech, which occurred at Mansion House, London at the time you mention: 19 February 1919; and several instances of the “strangling” remark. 1

Ironically, in view of the many allegations that Churchill wished to have “boots on the ground” against the Bolsheviks after World War I, his topic in 1919 was demobilization—and on the subject of Bolsheviks, he was saying quite the opposite:

The aid which we can give to those Russian armies which are now engaged in fighting against the foul baboonery of Bolshevism can be given by arms, munitions, equipment, and by the technical services. It is a malicious statement against the interests of the British Empire to suggest that it is necessary for us to prolong the action of the Military Service Act because of enterprises which we have on foot in Russia.

Lest any reader conclude that this might have been good advice for the Bush or Obama Administrations in regard to fighting terrorists in Afghanistan, Iraq or Syria, may we note that the situations are entirely different. Churchill’s words are often used to bolster modern political points—but not always with precision.

Churchill voiced the notion of strangling the infant Bolshevism in its cradle several times over the years. An early instance was in the House of Commons, 26 January 1949:

“I think the day will come when it will be recognized without doubt, not only on one side of the House, but throughout the civilized world, that the strangling of Bolshevism at its birth would have been an untold blessing to the human race.”

Churchill replied: “No, it would have prevented the last war.” Here he was suggesting the likelihood of a democratic Russia joining in collective security agreements to forestall Hitler’s aggressions.2

Churchill also mentioned “strangling Bolshevism” in his March 1949 speech to the Mid-Century Conference at the Massachusetts Institute of Technology. Five years later, in remarks to the National Press Club, Washington on 28 June 1954 he stated:

“If I had been properly supported in 1919, I think we might have strangled Bolshevism in its cradle, but everybody turned up their hands and said, ‘How shocking!’”3

This question provoked interest among Churchill scholars with whom we share Q&A emails. The following is a distillation of their comments.

Churchill’s initial anger at the Bolsheviks stemmed from their refusal to rejoin the fight against Imperial Germany after the Bolshevik Revolution in the first World War. Briefly, he hoped to convince them to rejoin the fight, making the suggestion that the Allies send a “commissar” to Russia to negotiate the deal. His surprising recommendation was Theodore Roosevelt.

After the war his condemnations became ideological, as he called for aid to the anti-Bolshevik forces. Describing, in 1920, the Bolsheviks as a “vile group of cosmopolitan fanatics,” he promised that “the policy I will always advocate is the overthrow and destruction of that criminal regime.”

Some presume that the crime he referred to was the execution of the Russian royal family but there was more to it than that, as Robert Rhodes James wrote in his Churchill: A Study in Failure 1900-1939:

Lloyd George subsequently wrote that ‘The most formidable and irresponsible protagonist of an anti-Bolshevik war was Mr. Winston Churchill. He had no doubt a genuine distaste for Communism….His ducal blood revolted against the wholesale elimination of Grand Dukes in Russia.’
This thrust was unfair; Churchill’s detestation of Bolshevism rested on deeper feelings….and his onslaughts upon Bolshevik philosophies and their exponents became even more outspoken. ‘The theories of Lenin and Trotsky,’ he declared in January 1920, ‘have driven man from the civilization of the 20th century into a condition of barbarism worse than the Stone Age, and left him the most awful and pitiable spectacle in human experience, devoured by vermin, racked by pestilence, and deprived of hope.’

Then in the age of Hitler, Churchill took a different tack, having considered that Nazism, by the 1930s, was by far the greater threat. Thus he made the famous quip to his private secretary, when Hitler invaded the Soviet Union in June 1941: “If Hitler invaded Hell I would at least make a favourable reference to the Devil in the House of Commons.”

After World War II, he returned again to the threat of communism, and was roundly reviled by the Western media (see cartoon) for turning on his former Soviet allies—only to be reviled by the other side when, in the early Fifties, he sought a “settlement” of the cold war with Stalin’s successors. But that is another story.

Featured Image: “Beware the Bogeyman”: 13 March 1946, a newspaper cartoon in the wake of popular uproar over Churchill’s “Iron Curtain” speech the week before; a few years later, there was less talk of false alarms.