The Churchill Project - Hillsdale College > Articles > Resources > Churchill and the East > The Effects of Race and Caste on Relief in the Bengal Famine, 1943-44

The Effects of Race and Caste on Relief in the Bengal Famine, 1943-44 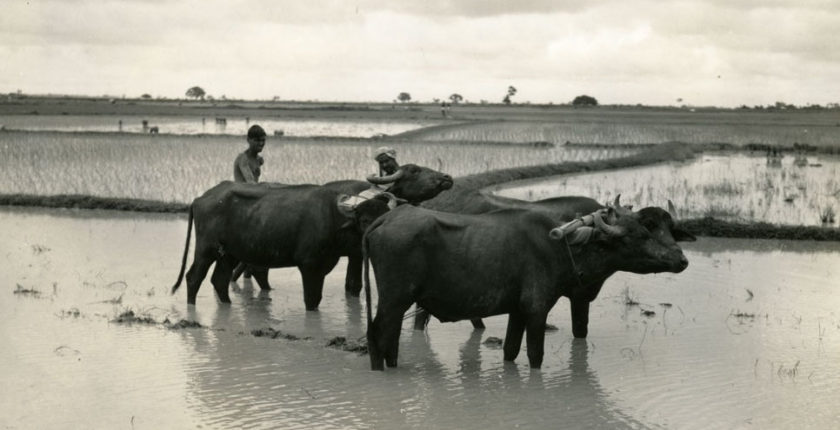 Bengali farmers plow a rice field with water buffalos, Gushkara, 1944. By then the crisis was over, but urgent efforts were being made to avoid a repeat in the autumn. (U.S. Army photo by Frank Bond, public domain)

This article demonstrates how the 1943-44 Bengal Famine, and relief activism during it, fed the politics of the Hindu right. This aspect of the tragedy has not previously received much scholarly attention. Using hitherto unused primary sources, Dr. Sarkar introduces a novel aspect to the study of communal politics, namely the propagation of Hindu communalism through food distribution during a humanitarian crisis. Examining caste and class bias in private relief efforts, this is the first in-depth study that process as it affected the Famine of 1943-44.

The Hindu Mahasabha (All-India Grand-Assembly party) pursed the famine for political purposes. The party portrayed Muslim food officials as “saboteurs” in the food administration. It alleged that the Muslim League Bengal government was “creating” new Muslim grain traders, undermining the established Hindu traders. It publicized the government’s failure to avert the Bengal famine to prove the economic “unviability” of creating a separate Pakistan. This article also explores counter-narratives, for example, that Hindu political leaders were deliberately impeding the food supply in the hope that starvation would compel Bengali Muslims to surrender their demand for Pakistan.

The politics of religious conversion played out blatantly in famine relief. This began when the Mahasabha accused Muslim volunteers of converting starving Hindus to Islam in exchange for food. It also demanded that Hindu and Muslim famine orphans should remain in Hindu and Muslim orphanages respectively. Finally, by dwelling on beef consumption by the army at the time of an acute shortage of dairy milk during the famine, the Mahasabha fanned communal tensions surrounding the orthodox Hindu taboo on cow slaughter.

“In general, during the Bengal famine, at the level of quotidian politics, the amount of private food-relief became proportional to the political dividends that a certain class, community, or caste was projected to yield. When religious allegiance began to determine the thin line between life and death, the already vitriolic communal politics in Bengal became even more toxic. Communalization and politicization of an indispensable prerequisite for human existence—food—inscribed communal hatred onto quotidian existence. This in turn widened the already existing chasm in the Bengali society along the lines of religion.”

Dr. Sarkar joined the University of Oxford after studying University of Exeter and the University of St Andrews. His Oxford doctorate was obtained when he was a Clarendon Scholar, and Vice-President for Academic Affairs of St Antony’s College. His thesis on the politics of food distribution and famine-relief won the Best Doctoral Thesis Award from the British International History Group. He is a Fellow of the Royal Asiatic Society of Great Britain and Ireland, and a member of the Royal Historical Society. He has presented research at Stanford University, Columbia University, and the universities of Chicago, Vienna, Warsaw, St Andrew’s, Oxford and Cambridge. His article provides a fresh dimension on the contentious issue of blame for the Bengal famine.

Zareer Masani, “Churchill and the Genocide Myth: Last Word on the Bengal Famine”

Arthur Herman, “Absent Churchill, Bengal’s Famine Would Have Been Worse”