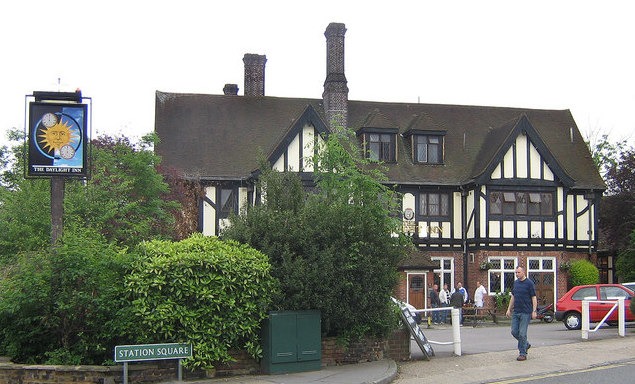 Daylight Inn, Petts Wood, southeast London, was a mock Tudor hotel opened in 1935. Its name derives from the campaign by William Willett, who lived in nearby Chislehurst, which led to the introduction of Summer Time. (Photo by Ian Capper, Creative Commons)

As we “spring ahead” to Daylight Savings Time 2021, Professor Warren Kimball reminds us of Winston Churchill’s effort to introduce this popular reform. “A Silent Toast to William Willett” (Cohen C429) is one of Churchill’s almost unknown writings. First published in Pictorial Weekly for 28 April, 1934, it was ignored until Michael Wolff gathered it into the Collected Essays of Sir Winston Churchill, vol. 3, Churchill and People (London: Library of Imperial History, 1974), pp. 116-19. It is reproduced here by kind permission of Randolph S. Churchill and the Churchill Literary Estate.

Willett and his cause

It is one of the paradoxes of history that we should owe the boon of summer time, which gives every year to the people of this country between 160 and 170 hours more daylight leisure, to a war which plunged Europe into darkness for four years, and shook the foundations of civilization throughout the world.

I was one of the earliest supporters of Daylight Saving. I gave it my voice and my vote in Parliament at a time when powerful interests and bitter and tenacious prejudices were leagued against it, and while the mass of the population was either indifferent or scornful.

The movement to secure this great public reform was launched by the late Mr. William Willett. He lived at Chislehurst, and the idea of saving daylight occurred to him in his early morning rides on St Paul’s Cray Common and in the adjoining Petts Wood, which is now the Willett Memorial Park. [In 2021 the National Trust Petts Wood and Hawkwood Properties.]

Willett adopted this cause as, in an earlier generation, Samuel Plimsoll had devoted himself to a crusade for the saving of life at sea, and, like Plimsoll, won an enduring name. His tireless exertions, vision, enthusiasm and driving power kept the movement alive in the face of every discouragement. But had it not been for the European War it would never have attained success. In the crush of that war people were forced to give up old prejudices and shake off the sluggish inertia of their minds. So, when in 1925, the emergency daylight saving of wartime was made permanent by Act of Parliament, there was virtually no opposition.

By then, of course, the country was able to appreciate, from experience, the benefits of summer time. These are indeed widespread; rich and poor, young and old, country and town dwellers, all alike enjoy the extra hours of daylight.

The greatest beneficiaries, however, have been the working classes, and particularly those who live in the towns. Agriculturists, in spite of their hard life, very often poor wages, and an absence of interests and variety, have the one great consolation that they are in close touch with Nature from day to day and year to year.

Such is not the fortune of the urban population. They live in artificial conditions, and summer time, which gives them an opportunity to correct the disadvantages of these conditions, is therefore of immeasurably greater value to them. To the swarms of workers in mines and mills, factories and workshops, these 160 hours more daylight leisure in which to make use of parks and gardens, and to indulge in some healthy and restful form of recreation, mean much more than most of us realize.

It is not only the increase in the hours of daylight leisure which is a benefit; it is the increase of the block of leisure which has been secured by the working classes. With two hours a man might do something to get into the country, or to the playing-fields, but that left practically no time for exercise or amusement. But with three or three and a half hours much more can be done.

Then there is fine work, which imposes a strain on the eyesight of those engaged in it. In so far as this is done in daylight, there is probably a saving of the eyesight of the workers. There is also the clear and obvious advantage in economizing the use of artificial light.

The Waste of Daylight

These advantages seem so clear and obvious today, that it is difficult to realize and recapture the mood in which the idea of summer time was received when, just over a quarter of a century ago, Mr. William Willett wrote his pamphlet, The Waste of Daylight, and Mr. Robert Pearce introduced into the House of Commons a Bill to give effect to his proposals.

It is instructive to recall some of the arguments which were advanced against the measure. It was opposed, by one section of the community which found spokesmen in Parliament, on moral grounds. The House of Commons was told that it was in danger of adopting hypocritical time—of departing from truth in matters of time; and the hope was expressed that we should not begin lying about this subject.

As I pointed out in a speech on the second reading of the Daylight Saving Bill of 1909, the evil was done already. In this matter the country had begun lying a long time before. When local times which varied in different parts of the country were assimilated, a great departure from truth was undoubtedly made.

This moral argument was, indeed, absurd, although I believe that its echoes still linger in some remote districts, where rustic “last-ditchers” refuse to alter their clocks and watches throughout the summer. It is not very easy to discover ultimate sanctions for any human or temporal arrangements. Our arrangement of time is conventional, and was probably fixed according to what was considered to be the general convenience.

But in these latitudes there is an immense variation between the extreme seasons of the year, and, in spite of that immense variation, there was, until the passing of the first Summer Time Act in 1916, practically no change in the hours of work and leisure. Looking at it from this point of view alone, there can be no question that general advantage results from making the hours of work and leisure correspond more closely to the seasons of the year.

It is quite impossible for an individual to make alterations in the hours at which he discharges particular duties, while everyone else remains unchanged, without subjecting himself to a great deal of inconvenience, and the fact that a number of firms had already adopted this early-rising system, in spite of the enormous inconvenience which attends all alterations from the regular habits of the community as a whole, before the first Summer Time Act, was very good evidence of the real, natural pressure behind the measure.

Another objection was that our change of clock time would come into contact with unchanged times in other countries, and that there would thus be friction and discordance. Difficulties regarding the Continental mails and the Stock Exchange were exaggerated out of all proportion to their real seriousness, and much was made of the inconvenience which would result to those who, in Liverpool, gambled in cotton, or in London dealt in the American market.

All these matters, however, were capable of adjustment. Another point raised was the question of harvest-time. But harvest hours are always irregular hours, and agricultural hours generally tend to correspond with the natural hours of sunlight.

Perhaps the most extraordinary criticism of all concerned restaurants. It was urged in opposition to the 1909 Bill that wealthy people liked to dine late, and that ladies preferred artificial light.

Another argument, from a very different angle, but which also reads strangely today, was that while daylight saving would be a great boon to the working classes, that boon might be taken away by an increase of overtime.

“He gave more light to his countrymen”

Reading the debates which took place in Parliament on daylight saving in 1908, 1909, and 1911, one marvels that so feeble a case should have been sustained so long, and that a measure whose effect has been to enlarge the opportunities for the pursuit of health and happiness among the millions of people who live in this country should have met with so frigid a reception.

Let us, then, as we put forward our clocks for another summer, drink a silent toast to the memory of William Willett, who spared neither labour nor money over a long period of his life in his advocacy of this great reform. He did not live to see success crown his unselfish efforts; he died in 1915, a year before the passing of the wartime Act. But he has the monument he would have wished, in the thousands of playing-fields crowded with eager young people every fine evening throughout the summer and one of the finest epitaphs that any man could win. William Willett gave more light to his countrymen.

Churchill had supported Summer Time long before his Willett piece. He first spoke in support of Willett’s proposal 25 years earlier. In his 1934 essay, he mainly reprised that 1909 speech; but one passage is too amusing to omit:

My Right Hon. Friend the Member for North Norfolk raised a very pertinent point. He asked, “Why should we be such miserably weak creatures as to require an Act of Parliament to make us get up early?”

I gathered that he himself was accustomed to get up early, especially in the summer months. But my Rt. Hon. Friend is no doubt master in his own house. If he determines to adopt a system of early rising in the summer he can be the embodiment of the Daylight Saving Bill to all who are dependent upon him for the shelter of his house. But what would happen to my Rt. Hon. Friend if, without changing the hours of any others in his dwelling, he were himself to get up an hour or an hour and a half earlier than the rest of the household? He would find himself in chill and fireless rooms, without breakfast, without attendance of any kind; and not only would he suffer inconvenience himself, but he would, I think, seriously obstruct the housemaid in the discharge of her domestic duties. [A voice: “In the summer?”]

Setting aside modern sensibilities that would label his remarks offensive class distinctions, the voice had a point—but only on chilly summer mornings. —RML