The Churchill Project - Hillsdale College > Articles > Resources > Churchill in WWII > Victory in Europe, 8 May 1945: All the Churchill VE Day Speeches

Victory in Europe, 8 May 1945: All the Churchill VE Day Speeches

The Hillsdale College Churchill Project proudly presents the texts and available audio of Winston Churchill’s four VE Day speeches. The texts are exactly what he said, transcribed from our review of original recordings.

THE END OF THE WAR IN EUROPE: VE DAY (BBC)

Yesterday morning, at 2.41 a.m., at Headquarters, General Jodl, the representative of the German High Command, and Grand Admiral Doenitz, the designated head of the German State, signed the act of unconditional surrender of all German land, sea, and air forces in Europe to the Allied Expeditionary Force, and simultaneously to the Soviet High Command.

Hostilities will end officially at one minute after midnight to-night (Tuesday, the 8th of May), but in the interests of saving lives the “Cease fire” began yesterday to be sounded all along the front, and our dear Channel Islands are also to be freed to-day.

The Germans are still in places resisting the Russian troops, but should they continue to do so after midnight they will, of course, deprive themselves of the protection of the laws of war, and will be attacked from all quarters by the Allied troops. It is not surprising that on such long fronts and in the existing disorder of the enemy the commands of the German High Command should not in every case be obeyed immediately. This does not, in our opinion, with the best military advice at our disposal, constitute any reason for withholding from the nation the facts communicated to us by General Eisenhower of the unconditional surrender already signed at Rheims, nor should it prevent us from celebrating to-day and to-morrow (Wednesday) as Victory in Europe days.

Today, perhaps, we shall think mostly of ourselves. Tomorrow we shall pay a particular tribute to the…our heroic Russian comrades, whose prowess in the field has been one of the grand contributions to the general victory.

The German war is therefore at an end. After years of intense preparation, Germany hurled herself on Poland at the beginning of September, 1939; and, in pursuance of our guarantee to Poland and in common with the French Republic, Great Britain, the British Empire and Commonwealth of Nations, declared war upon this foul aggression. After gallant France had been struck down we, from this Island and from our united Empire, maintained the struggle single-handed for a whole year until we were joined by the military might of Soviet Russia, and later by the overwhelming power and resources of the United States of America.

Finally almost the whole world was combined against the evil-doers, who are now prostrate before us. Our gratitude to all our splendid Allies goes forth from all our hearts in this Island and throughout the British Empire.

We may allow ourselves a brief period of rejoicing; but let us not forget for a moment the toils and efforts that lie ahead. Japan, with all her treachery and greed, remains unsubdued. The injury she has inflicted on Great Britain, the United States, and other countries, and her detestable cruelties, call for justice and retribution. We must now devote all our strength and resources to the completion of our task, both at home and abroad. Advance, Britannia! Long live the cause of freedom! God save the King!

VE DAY STATEMENT TO THE HOUSE OF COMMONS

That is the message which I have been instructed to deliver to the British Nation and Commonwealth. I have only two or three sentences to add. They will convey to the House my deep gratitude to this House of Commons, which has proved itself the strongest foundation for waging war that has ever been seen in the whole of our long history. We have all of us made our mistakes, but the strength of the Parliamentary institution has been shown to enable it at the same moment to preserve all the title-deeds of democracy while waging war in the most stern and protracted form.

I wish to give my hearty thanks to men of all Parties, to everyone in every part of the House where they sit, for the way in which the liveliness of Parliamentary institutions has been maintained under the fire of the enemy, and for the way in which we have been able to persevere—and we could have persevered much longer if need had been—till all the objectives which we set before us for the procuring of the unlimited and unconditional surrender of the enemy had been achieved.

I recollect well at the end of the last war, more than a quarter of a century ago, that the House, when it heard the long list of the surrender terms, the armistice terms, which had been imposed upon the Germans, did not feel inclined for debate or business, but desired to offer thanks to Almighty God, to the Great Power which seems to shape and design the fortunes of nations and the destiny of man; and I therefore beg, Sir, with your permission to move:

That this House do now attend at the Church of St. Margaret, Westminster, to give humble and reverent thanks to Almighty God for our deliverance from the threat of German domination.

This is the identical Motion which was moved in former times.

“THIS IS YOUR VICTORY”: VE DAY SPEECH, MINISTRY OF HEALTH BUILDING

God bless you all. This is your victory, victory of the cause of freedom in every land. In all our long history we have never seen a greater day than this. Everyone, man or woman, has done their best. Everyone has tried, none have flinched. Neither the long years, nor the dangers, nor the fierce attacks of the enemy, have in any way weakened the unbending resolve of the British nation. God bless you all.

TO VE DAY CROWDS IN LONDON

My dear friends, this is your hour. This is not victory of a party or of any class. It’s a victory of the great British nation as a whole. We were the first, in this ancient island, to draw the sword against tyranny. After a while we were left all alone against the most tremendous military power that has been seen. We were all alone for a whole year.

There we stood, alone. Did anyone want to give in? [Shouts of “No!”] Were we down-hearted? [“No!”] The lights went out and the bombs came down. But every man, woman and child in the country had no thought of quitting the struggle. London can take it. So we came back after long months from the jaws of death, out of the mouth of hell, while all the world wondered. When shall the reputation and faith of this generation of English men and women fail?

I say that in the long years to come not only will the people of this island but of the world, wherever the bird of freedom chirps in human hearts, look back to what we’ve done and they will say “do not despair, do not yield to violence and tyranny, march straight forward and die if need be—unconquered.” Now we have emerged from one deadly struggle—a terrible foe has been cast on the ground and awaits our judgment and our mercy.

But there is another foe who occupies large portions of the British Empire, a foe stained with cruelty and greed—the Japanese. I rejoice we can all take a night off today and another day tomorrow. Tomorrow our great Russian allies will also be celebrating victory and after that we must begin the task of rebuilding our heath and homes, doing our utmost to make this country a land in which all have a chance, in which all have a duty, and we must turn ourselves to fulfill our duty to our own countrymen, and to our gallant allies of the United States who were so foully and treacherously attacked by Japan. We will go hand and hand with them. Even if it is a hard struggle we will not be the ones who will fail. 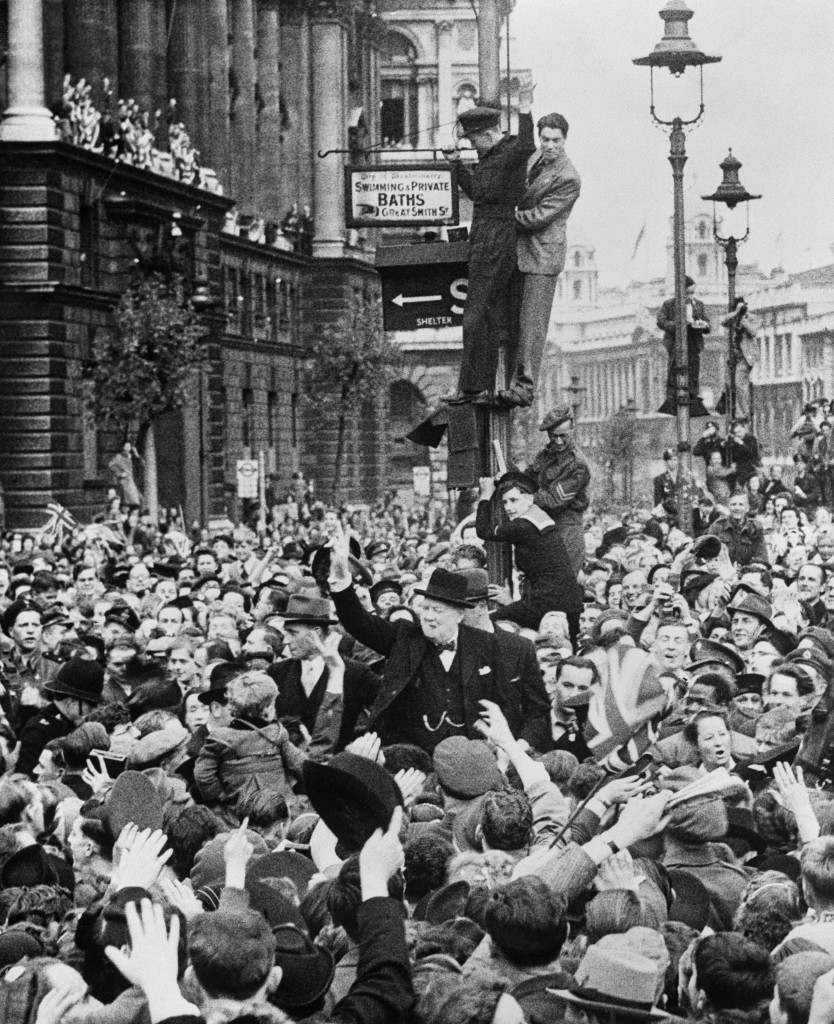 In the name of His Majesty’s Government I bring you great news. The war in Europe is over. It is finished in the complete and overwhelming triumph of the Allies, and has today been officially declared at an end by Britain, United States and Russia, speaking with one voice.

Germany, the ally of Japan, is utterly and finally defeated and has been forced to unconditional surrender. All her armies, fleets and aircraft have been destroyed or captured. All resistance has ceased and Germany is occupied from end to end by the armies of the Allied Nations.

After a gigantic struggle of nearly six years war has ceased in Europe, and all the millions of her people who were enslaved have been liberated from the foul Nazi domination.

This means that the time for your liberation also is at hand, and it is of you that we are thinking on this day. The armed might of the British Commonwealth and America with their Allies against Japan is now free to strike with tremendous and undivided power. You know how much has been accomplished already. There is no slackening in our effort, for we know full well that the war is not over until the same freedom has been brought to you.

Be of good cheer and rejoice with us on this day. Let my words and my message penetrate to the remotest villages of your lands. Lift up your hearts, for we are coming.