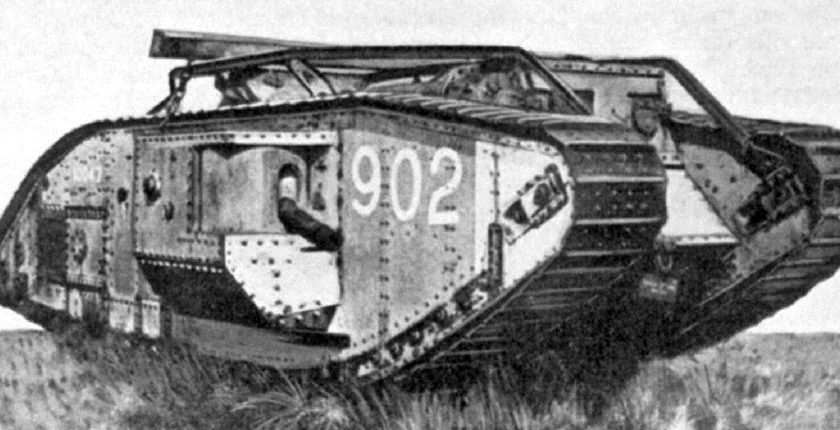 In 1915, Churchill is said to have “illegally allotted” £70 ,000 in Admiralty funds for creating what became the tank. In what sense was this illegal?

This was an assertion by the military historian Robert Cowley. There was nothing illegal about it. Churchill was just doing his job—and well it was that he was doing it.

In Eyewitness and the Origin of the Tanks,1 Major-General Ernest D. Swinton wrote about developing the tank within the British military establishment. Swinton, essentially a military journalist in 1914, was constantly in and out of the front lines of the war, moving back and forth between France and England. Seeing all the death, destruction and stalemate of trench warfare, he had the idea of what would eventually be the tank: an armored version of the Holt caterpillar tractor. He approached the Minister of the War, Lord Kitchener, who proved a hard man and a hard sale over his idea. Though apprehensive about Kitchener’s reaction, Swinton wrested an appointment, only to have Kitchener cancel it on the grounds that he was too busy.

“What I did not know,” Swinton wrote, “was that though the first [seed] had failed to grow on military soil, it had struck root in another quarter—namely in the fertile mind of Mr. Winston Churchill, then First Lord of the Admiralty. Naturally, it had not occurred to me that either he individually, or ‘Their Lordships’ as a body, were likely to interest themselves in an engine of land warfare!” (The Admiralty connection undoubtedly lent the idea for the first name for a tank: the “landship.”)

Maurice Hankey, secretary of the War Council, of which Churchill was a member, wrote a note about this at the end of 1914. As First Lord of the Admiralty, Churchill had under his charge naval air squadrons based at Dunkirk, accompanied by armored car squadrons to protect the air bases.

Swinton continues: “It thus happened that owing to the responsibility which had been placed upon the Admiralty for the defence of the home country against air attack, [Churchill] was concerned in land operations and methods of fighting in the Western Theatre of War—an anomaly, perhaps, but in the circumstances and in this connexion, a fortunate one for the nation.”

Britain had experimented with several designs of armored cars but they all had wheels, which could not cross trenches or perform well in mud. The Admiralty even tried to attach bridging equipment to them to help them along, but the results were disappointing. As Swinton proved, the tracks of a Holt caterpillar, with more grip and more weight-bearing surface, were ideal for the purpose

Concerning the £70,000 in Admiralty funds, Swinton was dispositive. Churchill, he wrote…

…took the first two steps to ensure full consideration for a project upon which he had set his heart. On the 20th of February, 1915, he formed a semi-technical committee under the Director of Naval Construction expressly to deal with it. Five weeks later, when this committee had brought matters to the executive stage of experiment necessitating the expenditure of money, he took the second step—one for which he deserves the gratitude of the Army and of the nation. He sanctioned the expenditure of £70,000 pounds of public funds upon what was a speculative venture, not—be it noted—for the Service for which he was responsible, but for the Army. Thus, at a time when the machine gun destroyer scheme had for six weeks been lying moribund at the War Office, abandoned as an impossibility, here was born on the other side of Whitehall a special organization, well supplied with the sinews of war for its support….In May [Churchill] severed his connexion with the Admiralty, though retaining an active interest in the landship project.

On the 30th June a demonstration took place of the crossing of entanglements by a small caterpillar tractor. This was carried out before Mr. Churchill and Mr. Lloyd George, then head of the newly formed Ministry of Munitions, and enlisted the interest of the latter—which he never lost—in the subject. As a result he [Lloyd George] agreed to take over from the Admiralty the responsibility for the supply of landships after that department should have produced a satisfactory machine.2

Ernest Swinton was the father of the tank, but Churchill made it happen because of his vision and influence, even after he had been sacked from the Admiralty over the Dardanelles-Gallipoli episode.

Marcus Frost of Mexia, Texas, is a longtime member of the Hillsdale College President’s Club, a student of Churchill, and a supporter of the Churchill Project.