The Making of “Their Finest Hour”: Part II 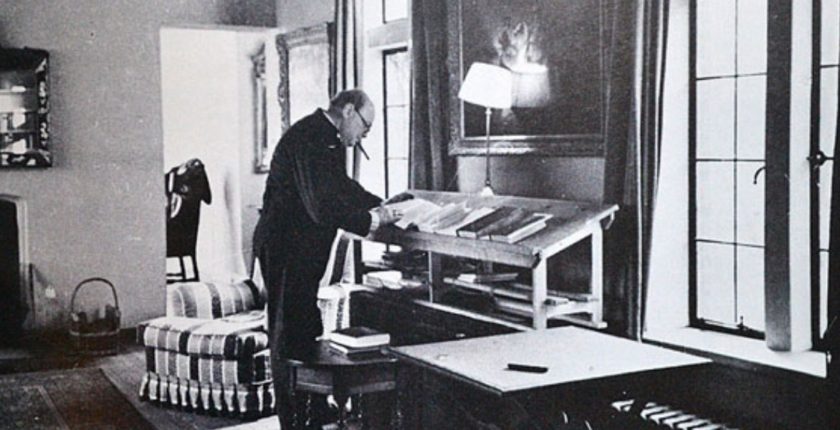 Craftsmanship: “One Hour of Prep for Each Minute of Delivery”

The Cabinet met at Ten Downing Street from 11am to 4pm on Monday, 17 June 1940. The news from France was very bad. Marshal Pétain, new head of the French government, had ordered his soldiers to lay down their arms. When the Cabinet adjourned, Churchill strode the garden, bowed in anxious thought, yearning for any kernel of hope amid unremitting disaster. At bedtime that night the morning newspapers, which he liked to read before retiring, had not arrived. Furious, he upset his weak whisky and soda all over his pile of official despatches.

The morning of the 18th found Churchill dictating to his devoted secretary, Mrs. Kathleen Hill, she using a noiseless typewriter, muffled so no clatter would distract him. The writer David Irving has left a vivid description of the scene at Downing Street:

His morning work was done a-bed, resplendent in silk kimono….The box of documents sagged open on the coverlet, a silver ice-bucket purloined from the Savoy waited at the bedside to receive the cigar butts. Nelson, the Admiralty’s pampered tom, had evicted Chamberlain’s black Treasury cat, in the way that felines do to establish their own imperium, and now fondled the new premier’s feet….Winston preferred Nelson’s company: he found he could converse at any length with cats without fear of interruption, and once he would swear he heard one remark, “These humans are very intelligent: I believe they understand quite a lot of what we say.”

The words flowed, Mrs. Hill typing silently, like a court stenographer. His task was to explain why Britain could hold, having lost most of her arms and equipment in the Dunkirk evacuation, having no ally in arms, having had only promises from Roosevelt, having heard from Moscow only messages congratulating the Germans.

There was much revision. Inwardly Churchill wondered: Was it too late? In May he had privately confessed his doubts to Roosevelt: he himself would go down fighting, Britain might be overrun.

But now he would say that the Channel was wide, the navy prepared, the army ready. In the last war victory had come from out of the blue. There were reasons to be confident. “It will not be useful to go into details,” he added in his own hand.

There were not many details to go into. In an earlier broadcast, having said, “we shall fight on the beaches,” he had covered the microphone and whispered, “And we will hit them over the heads with beer bottles, which is about all we have got to work with.”

His chief of staff, General Sir Hastings Ismay, said Churchill dictated “without the aid of a note.” He certainly had the raw technical data, but his words, Ismay wrote, “came straight from the heart.” Three months later during the London Blitz, Ismay reminded him that whatever happened, he had inspired the country. “Not at all,” Churchill snapped back. “It was given to me to express what was in the hearts of the British people.”

The draft complete, Churchill polished until he was satisfied, scribbling corrections in red and blue ink. As with all his important speeches, he presented the draft to his wife, the admirable Clementine: shrewd, practical, a better judge of people than he was. She thought it would go down very well.

The corrected text was retyped on smaller sheets the size of notepaper, in what Churchill’s secretaries called “Speech Form.” They had become adept at this: setting out the phrases as he would deliver them, like blank verse. Lord Halifax, “the Holy Fox,” Churchill’s religious foreign minister, called it “Psalm Form,” because it reminded him of lines from the Book of Psalms.

The sheets were hole-punched with a tool Churchill called “Klop,” named for the noise it made when in use. (He once told a secretary: “Fetch Klop!” She duly hauled out Onno Klopp’s fourteen-volume Der Fall des Hauses Stuart. “Christ almighty!,” he roared. “No, you damned fool, gimme Klop!” If he thought a secretary was wounded by such outbursts he would hasten to say: “Good heavens, you mustn’t mind me. We’re all toads beneath the harrow, you know!”)

Klopped and collated, the pages were fastened with a “treasury tag”—a short piece of yarn with metal bars at each end, which allowed him to flip from sheet to sheet while keeping them all together in proper order. He despised staples or paper clips, which would fall out, leaving him with masses of loose sheets.

Featured Image: Churchill preferred to draft his speeches and writings standing up. Here he works at his stand-up desk at Chartwell in the 1930s. This was the original version, short and placed on a case, built for Churchill by a local joiner; later his family presented him with a fine, full-height mahogany desk, which is part of the Churchill sculpture at Hillsdale College.