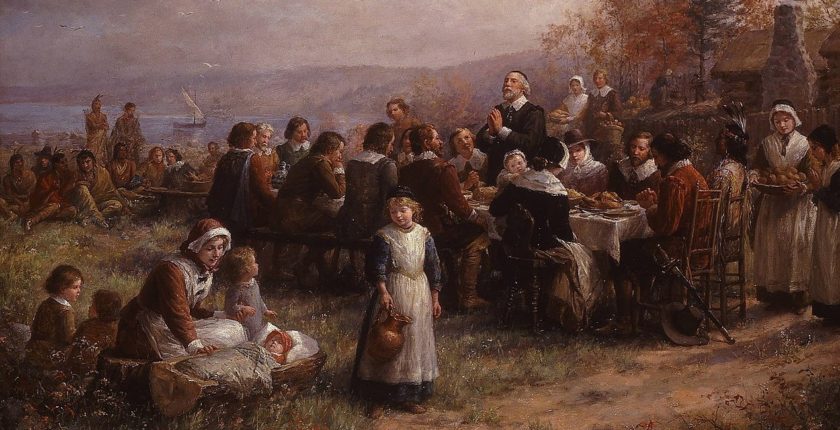 “The First Thanksgiving”: A 1925 recreation of a 1914 painting by Jennie Augusta Brownscombe (1850-1936), significant in that it omits the Plains Indian headdresses in the original, which were criticized as not historically accurate. (Wikimedia Commons, public domain)

We have come here tonight to add our celebration to those which are going forward all over the world wherever Allied troops are fighting, in bivouacs and dug-outs, on battlefields, on the high seas, and in the highest air. Always this annual festival has been dear to the hearts of the American people. Always there has been that desire for thanksgiving, and never, I think, has there been more justification, more compulsive need than now.

It is your Day of Thanksgiving, and when we feel the truth of the facts which are before us, that in three or four years the peaceful peace-loving people of the United States, with all the variety and freedom of their life in such contrast to the iron discipline which has governed many other communities—when we see that in three or four years the United States has in sober fact become the greatest military, naval, and air power in the world—that, I say to you in this time of war, is itself a subject for profound thanksgiving.

I have spoken of American Thanksgiving. Tonight here, representing vaster audiences and greater forces moving outside this hall, it is both British and American thanksgiving that we may celebrate. And why is that? It is because under the compulsion of mysterious and all-powerful destiny we are together. We are joined together, shedding our blood side by side, struggling for the same ideals, until the triumph of the great causes which we serve shall have been made manifest.

But there is a greater Thanksgiving Day which still shines ahead, which beckons the bold and loyal and warm-hearted. And that is when this union of action which has been forced upon us by our common hatred of tyranny, which we have maintained during these dark and fearful days, shall become a lasting union of sympathy and good-feeling and loyalty and hope between all the British and American peoples, wherever they may dwell. Then, indeed, there will be a Day of Thanksgiving, and one in which all the world will share.