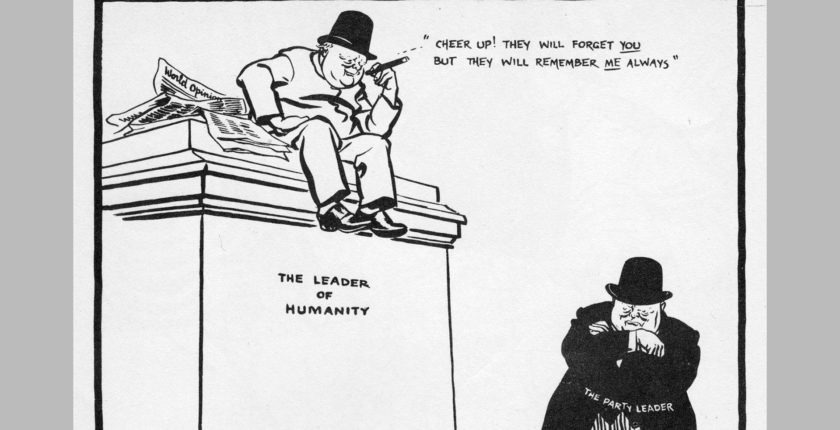 “Cheer up!” quipped cartoonist David Low, when Churchill lost the 1945 election: “They will forget you (the party leader), but they will remember me (the leader of humanity) always.” Low’s formulation might apply to various parts of this multi-author compilation. (Evening Standard, 31 July 1945)

Both the cover and the contents of this multi-author compendium could be better. The exaggerated subtitle, “Politics, Strategy and Statecraft” is not too descriptive. “Few people are aware of the full range of [Churchill’s] achievements or the many controversial aspects of his career,” says the introduction. Really? The book provides “a short, accessible and analytical introduction to key themes in Churchill’s life [that] reflect cutting edge scholarship.” But several books do that better. Addison’s Churchill: The Unexpected Hero and Paul Johnson’s Churchill, for example, provide shorter, more readable access to his statecraft and other themes. This book does not offer much that is new, and lacks editorial unity. Some authors cover the same ground, variously agreeing or contending, with no cross-references or attempts to contrast their opinions. 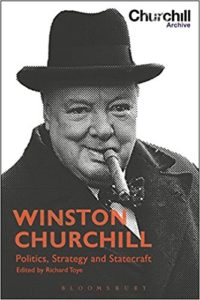 There are several thoughtful components. Kevin Ruane capably surveys Churchill on nuclear weapons and the Cold War. Warren Dockter offers a good summary of Churchill on Islam (not involving “politics, strategy or statecraft”). Paul Addison’s “Churchill and Women” is outstanding, offering balanced judgment without the trappings of hindsight. From Nanny Everest to his mother and his wife, Churchill delighted in female company. His early loves, Muriel Wilson, Ethel Barrymore and Pamela Plowden, entranced him—especially “when accompanied by a sympathetic interest in the fortunes of Winston Churchill.” Addison finely describes the female Chartwell staff, especially the loyal secretaries; and exotics like Eleanor Roosevelt, Madame Chiang Kai-shek, and The Queen. For women, the distinction between public and private spheres crumbled in the two World Wars, leading to a greater role in politics and the professions. Churchill valued their thought, and adopted their values in his male-dominated world.

In the chapter “Young Statesman,” David Thackeray speaks of Churchill as among the New Liberals, but is not too clear how they differed from old Liberals. All favored free trade, pensions, old age benefits and reforming the House of Lords. He says Churchill accepted women’s suffrage in principle but was angered by suffragette tactics and violence. In 1924, Stanley Baldwin made Churchill Chancellor of the Exchequer “to associate his administration with moderate social reform.” This assumes more principle than guile on the part of Baldwin. His main intent was to separate Churchill from the Liberal, Lloyd George.

In “Chancellor and Gold Standard,” Peter Catterall corrects Thackeray on Baldwin’s chief reason for recruiting Churchill—political calculation. Interestingly, he notes that Churchill as chancellor wanted to defend Singapore with aircraft, not guns, which “were in due course installed [on the wrong side] with disastrous consequences.” The Gold Standard issue, Catterall adds, should not “distract from his efforts creatively to tackle the many challenges he confronted whilst at the Treasury.” That has been said before, frequently.

In a later chapter on the 1926 General Strike, Catterall quotes the New Statesman’s allegation that Churchill favored “a little blood-letting.” But contemporary primary sources don’t support this. Catterall is however right that Churchill and his cabinet colleagues believed that negotiations with strikers should not continue “without withdrawal of strike notices.”

Chris Wrigley in “Churchill and Labour” repeats the Sidney Street episode from an earlier chapter and corrects where Churchill sent troops against Welsh strikers. (But why not simply edit out the original error?) Wrigley says Churchill had hazy ideas about socialism and confused German social democrats with anarchists. Despite his hostility to socialism (which he had hazy ideas about) he welcomed trade unionism. To him, unions bespoke “Victorian individualism.” To Wrigley the Gestapo speech (1945 election) was “shocking”—but a later writer, Stuart Ball, reconsiders that speech, more accurately labelling it “disproportionate.”

Ball’s chapter on WSC and the Conservative Party is excellent, though more a party history than about Churchill’s statecraft. Ball reminds us that WSC was closer to Tory opinion than many think, even in the 1930s. His disagreements over the India Act and rearmament were shared by many, though they didn’t particularly trust him. Ball shows Churchill as an effective Leader of the Opposition (1945-51), disproving charges of absence and disinterest by other writers. He spoke in major debates and retained control of strategy, but wisely delegated the details to party functionaries. World War II had elevated his status above others, Ball says. But that should “not preclude assessing [his] domestic political record on the same basis as other leading politicians.” Churchill, Ball concludes, comes out “quite well” in such comparisons.

Editor Toye writes that until 1900 Churchill’s “political views had fallen within the Conservative mainstream, albeit he showed occasional Liberal sympathies.” Hmm. In 1896, young Winston wrote his mother: “There are no lengths to which I would not go in opposing [the Conservatives] were I in the House of Commons. I am a Liberal in all but name.” He never really changed, even after he “re-ratted” back to the Tories. As Leo Amery wrote in 1929: “On essentials, he is still where he was 25 years ago, in intellectual conviction at least.”

A virtue of the book is its links in the eBook version to documents in the Churchill Archives. That’s neat. Unfortunately, unless you can read it on a larger screen than Kindle—e.g., an iPad—it’s difficult to make out the archive documents, which my Kindle can’t enlarge.