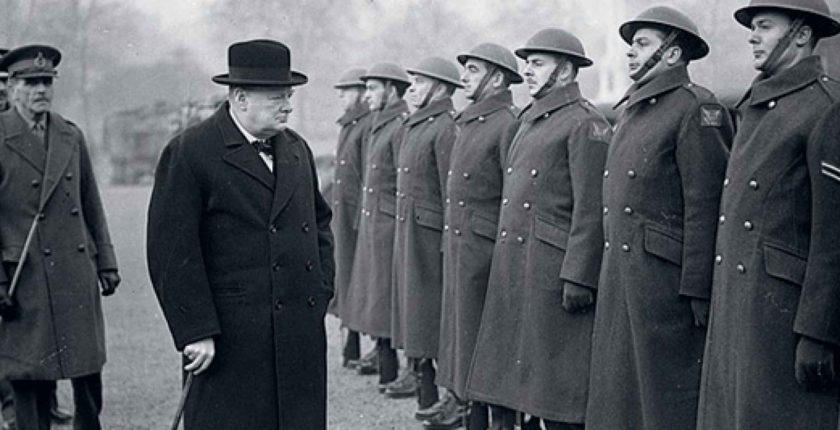 In his long and eventful life, Winston Churchill witnessed many episodes of political and scientific development. His experiences, especially in warfare, greatly affected his views concerning the role of education in the survival of a modern and free civilization.

In his famous 1924 essay, Shall We All Commit Suicide?, Churchill asserts a seemingly unassailable truth: “The story of the human race is war.” For Churchill, war was a part of human history and ultimately of human nature, and to pretend otherwise is naive. Historically, limited resources and less lethal weaponry cost fewer lives and led to shorter wars.1 Alas the 20th century saw the invention of new, deadly weapons and massive military mobilization. The result was two world wars and nearly 80 million dead.

Churchill believed the causes for these catastrophes began in the Victorian era, which he called “the age of accumulation.” During this time, “Education spread itself over the broad surface of the millions. Science had opened the limitless treasure-house of nature. Door after door had been unlocked.” This global increase in education and science, combined with the rise of “patriotism and nationalism” in the more developed nations of Europe, led to the waging of war on an unprecedented scale.2

Even as a young man of twenty-seven and a newly elected Member of Parliament, Churchill recognized and warned against the horrors of modern European war. In the past, Britain had fought minor battles with relatively primitive nations along the borders of its empire. These frontier conflicts were mostly simple and brief. But “a European war,” Churchill warned, “cannot be anything but a cruel, heartrending struggle”—entire nations locked in a bloody fight to the death.3

His fears proved prophetic in the First World War, which he later called a war between “Christian civilization and scientific barbarism.” Churchill did not refer to science as inherently barbaric, but rather as mankind’s latent barbarism, enhanced by science. Science was not to blame for the destruction of Europe, but rather the “brutish, treacherous, predatory promptings of human nature.” 4 What ultimately concerned Churchill was the fact that, for the first time in human history, mankind had failed to improve in terms of “virtue” all the while developing the “tools by which it can unfailingly accomplish its own extermination.”5

Churchill also feared that modern science, if misapplied, would subdue the human virtue necessary for a free society. This became apparent during the battle of Omdurman 1898. In The River War, Churchill describes the valiant, “ingenious” tactics of the Mahdist dervishes’ attack. Though incredibly brave, the dervishes lacked the mechanization of the British. Thus their efforts proved futile. The British fired, “steadily and stolidly, without hurry or excitement” into their ranks. While Churchill despised the Mahdist regime, he held great sympathy for its warriors, who fell by the thousands yet fought on. He understood that mankind faced a new danger. Now victory depended not on the virtue of warriors but on military technology. Courage on the battlefield would fall prostrate beneath the superiority of science.6

Maintaining peace in the atomic age

Churchill longed for a day when science would develop a cure for “such hardships in war” so that nations might one day be able to return to the “less destructive, healthier conflicts of the past.”7 Ironically, the advent of an even more terrible weapon, the atomic bomb, would serve as the most effective deterrent to global conflict. But Churchill believed that deterrence alone was insufficient to sustain peace in the long run. The predisposition to fight, inherent in human nature, cannot be cured by a scientific advance. Rather, global peace and security demand an increase in human virtue alongside scientific development. To this end, Churchill argued that a reformation in education would prove “invaluable to the formation of character and to the development of those qualities by which freedom and justice are preserved.”8

At the University of Miami in 1946, Churchill summarized what this ideal education should entail. With the fall of Fascism and rise of Communism, maintaining peace and security would fall to the English-speaking nations. Those nations, he argued, were uniquely similar in heritage, principles and social institutions, all of which had contributed to their rise as the freest nations on earth. A healthy relationship between them required that they be well educated in their similar literature, common language, and history. The English-speaking nations shared common ground in much of their literature. This, Churchill argued, not only “unites” them but remains a “powerful instrument whereby our conception of justice, of freedom, and of fair play and good humor may make their invaluable contribution to the future progress of mankind.”

Studying the English language was essential for perpetuating this mutual conception of “fair play and good humour” between America and the British Commonwealth. History plays a critical role for civilization, he said, being the “only foundation we have from which to peer into and try to measure the future.” Churchill advocated for what today may be labeled a liberal arts education, based in the Anglo-American tradition that provided the principal foundations of liberty and prosperity around the world.9

Churchill understood that if mankind was to avoid a recurrence of past tragedies, free peoples had to be fluent in more than just mechanics and science. He suggested that higher education lacked sufficient emphasis on the humanities translating into an important and often overlooked contributing factor to the two world wars.10 The humanities allow us to study the higher things in life—transcendental principles such as justice and virtue—which help stave off man’s inherent propensity towards conflict. Education strictly focused on science does not address these principles. The misuse of science in the absence of morality is destructive to human civilization, especially when coupled with man’s tendency for war.

But it must be noted that Churchill did not in any way disapprove of people receiving training in a trade. Quite the contrary, he acknowledged that the modern world was undeniably one of “machinery and specialization.”11 In a world rapidly advancing technologically, expert knowledge is “indispensable.” He also acknowledged that vocational training can develop character in ways even formal education cannot. For example, soldiers returning from war who have led or inspired others offer an education invaluable to the formation of character and to the development of those qualities “by which freedom and justice are preserved in strong nations.” Relying strictly on either vocational training or on university study would not, Churchill warned, suffice within our contemporary society. Society prospers only when both are properly balanced.

After witnessing the tragic consequences of modern war and the potential for moral decline, Churchill strove to explain how free individuals might remain free in a time governed increasingly by science and mechanization.  He believed that the survival of freedom demanded a serious reinforcement of the ideas that first gave it birth. These he saw expressed in the literature, language, and history of the English-speaking peoples. Only in reaffirming their ideological foundations could the offspring of the English tradition maintain the unity, commitment, and virtue necessary to face the threats of the modern age.  In summary, what Churchill saw as necessary for freedom and peace in the 20th century and beyond was strength through pursuit of truth.