The Churchill Project - Hillsdale College > Articles > Truths and Heresies > Personal Matters > Don’t fall for it: Churchill had no affair with Lady Castlerosse

Don’t fall for it: Churchill had no affair with Lady Castlerosse 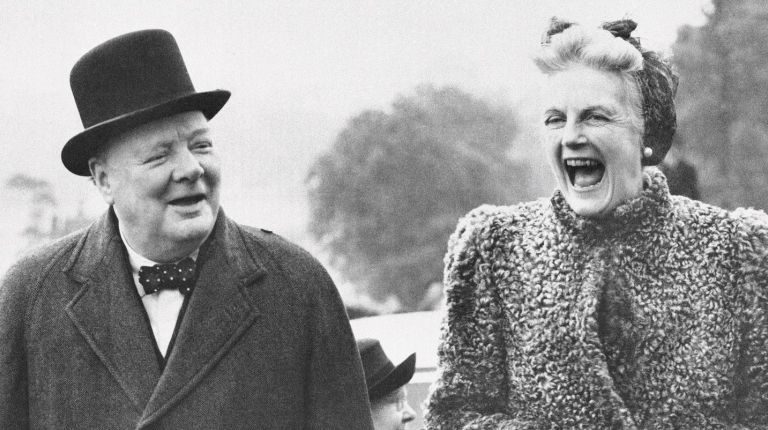 “Revealed,” blares the Sunday Telegraph. “Churchill’s secret affair and the painting that could have damaged his reputation.” “Winston Churchill’s secret love Doris Castlerosse a blackmail risk,” agrees The Sunday Times. At least the Daily Mail inserted a note of doubt in its headline—“Churchill may have cheated with society’s wildest woman”—and included a question mark in its opening line: “Did Churchill cheat on Clemmie with Cara Delevingne’s great-aunt, who was 1930s society’s wildest and most ecstatically beautiful woman?”

The allegations that Winston Churchill was unfaithful while on holiday in the South of France in the mid-1930s have been knocking around for eighty years, with nothing substantial to back them up besides some pictures that Churchill painted of his alleged lover, the society beauty Lady Castlerosse, and a photograph of them sitting next to each other on some rocks. However a BBC Channel 4 broadcast on February 25th has some new evidence, in the shape of a tape-recorded statement by Sir John “Jock” Colville, Churchill’s private secretary, in which he said that an affair did take place.

Having been researching a biography of Churchill for the past four years, I do not believe it. The Sunday Times states that “No historian or biographer listened to the entire tape — until now.” This is quite untrue; I listened to it many months ago, as has Allen Packwood, director of the Churchill Archives Centre. Colville actually said the words to another historian, Dr. Correlli Barnett, back in 1985. When I heard the tape, I decided to investigate the allegation closely. I found that the facts, and other correspondence in the Archives, simply do not support it.

The alleged affair took place in 1933-37, but Colville did not become Churchill’s private secretary until May 1940. So this is at best second-hand information, and Colville does not say that Churchill ever spoke to him about it. He was also speaking half a century afterwards, an absurdly long period of time for historians to take oral evidence seriously.

The fact that Churchill painted his friend Lady Castlerosse—who did have an affair with his son Randolph in the early 1930s—means nothing. He also painted Sir Walter Sickert’s wife Therese , Arthur Balfour’s niece Blanche Dugdale, Sir John Lavery’s wife Hazel, his own sister-in-law Lady Gwendoline Churchill, his secretary Cecily Gemmell, his wife’s cousin Marryot White, and Lady Kitty Somerset. There is no suggestion he was sleeping with any of them. Meanwhile, he painted his wife Clementine three times.

That the Delevigne family, including the supermodel Cara, and others who were also not alive at the time, claim that an affair took place is equally flimsy evidence. Plenty of people like to claim notorious links with the famous, as Cara herself must have discovered by now. Similarly, the sly insinuation that servants were given the evening off so that Churchill could have sex with Lady Castlerosse can be easily explained by the fact that they wanted privacy to talk and gossip. Servants were known to sell overheard information to newspapers. Even Buckingham Palace servants were not allowed into the weekly lunches that Churchill had with the King during World War II.

There are no love-letters between Churchill and Lady Castlerosse. It requires a huge leap of imagination to turn phrases of his such as, “I wonder whether we shall meet again next summer?” into a billet-doux. If Churchill was having a passionate affair with her, would he wait for a whole year to see her again? The fact that he signed off one telegram “Love, W” means nothing between friends in the Thirties. Neither is the fact that Clementine did not go down to stay in the South of France indicative of anything—the Churchills had holidayed separately for three decades and she disliked the Riviera. Although the house where it allegedly happened, the Chateau de l’Horizon at Golfe-Juan, was louche, it was also a place with lots of writers and journalists present. Why would an internationally renowned figure have chosen there to have an affair?

At the time, Lady Castlerosse was still legally married to Valentine Castlerosse at the time, the most waspish gossip columnist of the 1930s. He was the very last person an adulterer would have chosen to cuckold. Even in 1937, after so many disappointments during the Wilderness Years, Churchill still believed he was going to become Prime Minister one day. This would have been an insane risk to have taken. He mentioned Lady Castlerosse’s presence to Clementine in one of his letters from the Chateau, and Lady Castlerosse once asked Churchill to bring Clementine to a dinner party she was giving in London.

We know from the memoirs of people who stayed at the Chateau de l’Horizon that Churchill believed Lady Castlerosse to be extraordinarily dim; she did not know that the League of Nations was stationed in Geneva, for example. Would Churchill have really put up with such an ignorant mistress for the four years alleged by this programme?

By far the most important reason to doubt this story was that Churchill was desperately in love with Clementine from 1908 onwards. She was his rock, co-conspirator, recipient of several hundred heartfelt and passionate love-letters (including some from the Chateau de l’Horizon), the mother of his five children and supporter through every conceivable reverse in life.

This extremely uxorious man with absolutely no track record of infidelity should not become the latest casualty of the post-Weinstein phenomenon, however much the media loves to drag down our heroes. For papers of record to present the story as true, without interviewing any of the plethora of Churchill historians, or members of the Churchill family, before they trash the reputation of the Greatest Englishman, is a disgrace.

Andrew Roberts is the author of Masters and Commanders: How Four Titans Won the War in the West and Storm of War: A New History of the Second World War. His next work, Walking with Destiny, a new biography of Sir Winston Churchill, may be ordered now for delivery in November. This review first appeared in The Spectator of 25 February 2018 and is republished by kind permission of the author and editors.