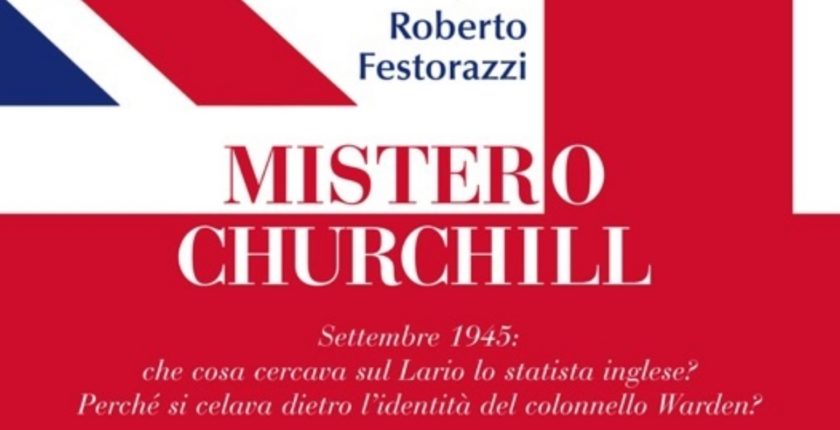 In recent years, the long-running but fictitious story of Churchill’s alleged peace offers to Mussolini has been subject to analyses and rehashes, in diverse Italian books and newspapers. At the base of the issue is the fact that nobody has ever been able to produce originals of the letters, and the photographic reproductions that occasionally surface are easily seen to be fakes. (See Churchill-Musso Non-Letters)

While Festorazzi’s book continues to advance the speculation, the element of interest he adds is his detailed account of Churchill’s trip to Italy in September 1945, soon after the war had ended, with his party’s defeat in the British general election. The author attempts to show that the real purpose of that trip was not a painting holiday, but to recover the correspondence with Mussolini, which, if now found, would prove to be embarrassing. But in this wild goose chase he reveals some interesting new details.

Churchill was accompanied by his daughter Sarah, his doctor Lord Moran, and his valet Frank Sawyers. As in his wartime travels he used the pseudonym “Col. Warden” to obscure his identity. The guest of Field Marshal Sir Harold Alexander, he was guarded by officers and soldiers of his old regiment, the 4th Hussars. Alexander proved the perfect host, as Churchill wrote to his wife describing his idyllic life at the Villa delle Rose. Inspired by the beautiful lakesides of Como and Lugano, he produced many fine paintings. Of course, says the author, painting was not his chief interest.

Festorazzi describes a number of bags Mussolini took with him in his 1943 escape from captivity at Gran Sasso, alleging that these contained the incriminating Churchill letters, trying to provide what he sees as documentary proof of their existence. Leaving aside the abject phoniness of the letters reproduced, it is difficult to believe that Mussolini, after his fall and imprisonment, would have had with him papers from his years in government.

Despite dwelling on what can now only be seen as an urban myth, this book is somewhat better than the others on the subject, since it offers many details on Churchill’s trip to Italy. The author reports interesting and amusing tales of the sojourn in those charming places, and also reproduces five hitherto unpublished pictures of Churchill’s daily transfers, along with five of the paintings he produced during his stay.

Unfortunately, at present there is no English language translation which would open the Mussolini story to a wider readership. Perhaps it is just as well.