21 November 2020: The 400th Anniversary of the Mayflower Compact 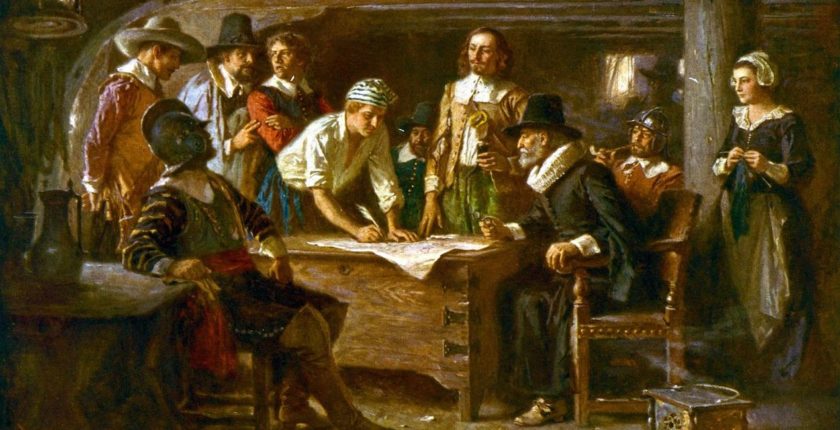 Excerpted from Winston S. Churchill, A History of the English-Speaking Peoples, vol. 2, The New World (1957), by kind permission of Curtis Brown Ltd.

Beneath the drab exterior of Jacobean England, with favouritism at Court and humiliation in Europe, other and more vital forces were at work. The Elizabethan bishops had driven the nobler and tougher Puritan spirits out of the Established Church. But though they destroyed the organisation of the party, small illegal gatherings of religious extremists continued to meet. There was no systematic persecution, but petty restrictions and spyings obstructed their peaceful worship.

A congregation at Scrooby, in Nottinghamshire, led by one of their pastors, John Robinson, and by William Brewster, the Puritan bailiff of the manor of the Archbishop of York, resolved to seek freedom of worship abroad. In 1607 they left England and settled at Leyden, hoping to find asylum among the tolerant and industrious Dutch.

For ten years these Puritan parishioners struggled for a decent existence. They were small farmers and agricultural workers, out of place in a maritime industrial community, barred by their nationality from the guilds of craftsmen, without capital and without training. The only work they could get was rough manual labour. They were persistent and persevering, but a bleak future faced them in Holland. They were too proud of their birthright to be absorbed by the Dutch. The authorities had been sympathetic, but in practice unhelpful. The Puritans began to look elsewhere.

Perils of the unknown

Emigration to the New World presented itself as an escape from a sinful generation. There they might gain a livelihood unhampered by Dutch guilds, and practise their creed unharassed by English clerics. As one of their number records,

The place they had thoughts on was some of those vast and unpeopled countries of America, which are fruitful and fit for habitation; being devoid of all civil inhabitants; where there are only savage and brutish men, which range up and down little otherwise than the wild beasts of the same.

Throughout the winter of 1616-17, when Holland was threatened with a renewal of war with Spain, there were many discussions among the anxious community. A mortal risk and high adventure lay before them. To the perils of the unknown, to famine, and the record of past failures were added gruesome tales of the Indians; how they flayed men with the shells of fishes and cut off steaks which they broiled upon the coals before the eyes of the victims.

But William Bradford, who was to become Governor of the new colony, pleaded the argument of the majority. In his History of the Plimoth Plantation he has expressed the views they held at the time.

All great and honourable actions are accompanied with great difficulties, and must be both enterprised and overcome with answerable courages. The dangers were great, but not desperate; the difficulties were many, but not invincible. For though there were many of them likely, yet they were not certain; it might be sundry of the things feared might never befall; others by provident care and the use of good means might in a great measure be prevented; and all of them, through the help of God, by fortitude and patience, might either be borne or overcome. Such attempts were not to be made and undertaken without good ground and reason; not rashly or lightly as many have done for curiosity or hope of gain.

But their condition was not ordinary; their ends were good and honourable, their calling lawful, and urgent; and therefore they might expect the blessing of God in their proceeding. Yea, though they should lose their lives in this action, yet might they have comfort in the same, and their endeavours would be honourable. They lived here but as men in exile, and in a poor condition; and as great miseries might possibly befall them in this place, for the twelve years of truce were now out, and there was nothing but beating of drums, and preparing for war, the events whereof are always uncertain. The Spaniard might prove as cruel as the savages of America, and the famine and pestilence as sore here as there, and their liberty less to look out for remedy.

Their first plan was to settle in Guiana, but then they realised it was impossible to venture out upon their own. Help must come from England. They accordingly sent agents to London to negotiate with the only body interested in emigration, the Virginia Company. One of the members of its council was an influential Parliamentarian, Sir Edwin Sandys. Supported by the London merchant backers of the company, he furthered the project.

Here were ideal settlers, sober, hard-working, and skilled in agriculture. They insisted upon freedom of worship, and it would be necessary to placate the Anglican bishops. Sandys and the emissaries from Holland went to see the King. James was skeptical. He asked how the little band proposed to support itself in the company’s territory in America. “By fishing,” they replied. This appealed to James. “So God have my soul,” he exclaimed in one of his more agreeable remarks, “‘tis an honest trade! It was the Apostles’ own calling.”

The Leyden community was granted a licence to settle in America, and arrangements for their departure were hastened on. Thirty-five members of the Leyden congregation left Holland and joined sixty six West Country adventurers at Plymouth, and in September 1620 they set sail in the Mayflower, a vessel of 180 tons.

After two and a half months of voyaging across the winter ocean they reached the shores of Cape Cod, and thus, by an accident, landed outside the jurisdiction of the Virginia company. This invalidated their patent from London. Before they landed there was trouble among the group about who was to enforce discipline. Those who had joined the ship at Plymouth were no picked band of saints, and had no intention of submitting to the Leyden set. There was no possibility of appealing to England. Yet, if they were not all to starve, some agreement must be reached.

Forty-one of the more responsible members thereupon drew up a solemn compact which is one of the remarkable documents in history, a spontaneous covenant for political organisation.

We whose names are under-written, the loyal subjects of our dread sovereign Lord, King James, by the grace of God, of Great Britain, France, and Ireland king, defender of the faith, etc. Having undertaken, for the glory of God, and advancement of the Christian faith, and honour of our king and country, a voyage to plant the first colony in the Northern parts of Virginia, do by these presents solemnly and mutually in the presence of God, and one of another, covenant and combine ourselves together into a civil body politic, for our better ordering and preservation and furtherance of the ends aforesaid; and by virtue hereof to enact, constitute, and frame such just and equal laws, ordinances, acts, constitutions, and offices, from time to time, as shall be thought most meet and convenient for the general good of the colony, unto which we promise all due submission and obedience.

In December on the American coast in Cape Cod Bay, these men founded the town of Plymouth. The same bitter struggle with nature that had taken place in Virginia now began. There was no staple crop. But by toil and faith they survived. The financial supporters in London reaped no profits. In 1627 they sold out and the Plymouth colony was left to its own resources. Such was the founding of New England.