“Marshall: The Man of the Age” – edited by Mark Stoler & Daniel Holt 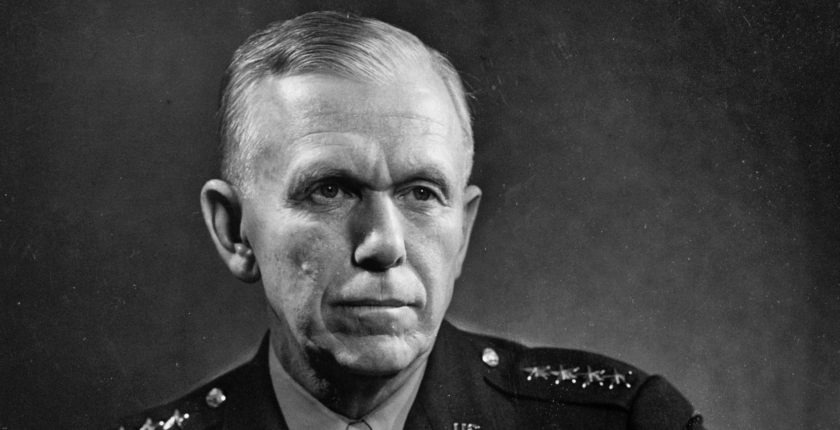 This is the seventh and final volume of the The Marshall Papers, published under the auspices of the George C. Marshall Foundation in Lexington, Virginia, which has also posted an electronic edition of the material in volumes 1-6.

George Marshall’s stature among Americans of the mid-twentieth century is easily forgotten today. He had his critics—the MacArthur men in the Army and, later, some rabid anti-communists—but, in his role as Army Chief of Staff and principal military advisor to President Roosevelt, he was acclaimed as the “organizer of victory” in World War II. Marshall’s devotion to duty, his sense of honor, and his magnanimous, if distant, persona, were the obvious foundations of his character. After the war, he assumed the role of civilian statesman, most notably as Secretary of State from 1947-1949, where his gravitas inside and outside of government was essential in garnering support for the Truman Doctrine and especially the plan for the economic rehabilitation of Europe, a plan which famously bore his name.

This final volume of The Marshall Papers covers the last decade of his life, after his resignation as Secretary of State. Marshall was hardly idle. He served as civilian head of the American Red Cross from October 1949 to December 1950. In September 1950, during the chaos of the early days of the Korean War, when it appeared that the Americans faced a military disaster, he accepted with the greatest reluctance Truman’s plea to return to office, as Secretary of Defense. He resigned that post in September 1951, but retained an office in the Pentagon and remained a source of counsel for the remainder of Truman’s term. For this period, the editors have not reproduced all the documents that emanated from his office, but only those that Marshall wrote, dictated, spoke, and/or edited (with annotations to the many staff-written documents).

The Papers reveal the elder statesman coming to grips with the military ebb and flow of the Korean War (including the civilian-military crisis with MacArthur). Even so, much of his attention was focused on Europe, a region which he believed to be of higher strategic priority than Asia. This involved the establishment of a NATO military command, efforts to convince the French to accept German rearmament, congressional approval for a major U.S. military buildup, and a Mutual Security Program for America’s allies.

The editors were able to pay greater attention to his personal life than in previous volumes, due in large part to the recent acquisition of documents from family members. Much of the valuable material from his retirement years involves his extensive correspondence with friends, former military colleagues, and national and international leaders, such as Dwight Eisenhower, George Kennan, Dean Acheson and Winston Churchill; his interviews with historians and journalists about his career (his answers typically blunt and terse); and speeches, in which he sometimes unburdened himself about his experience with the real-world difficulties of military command and civilian responsibilities.

When traveling, George Marshall often sent long, well-written narratives describing events and people to his wife or friends, such as former President Truman—notably about his experience in England in 1953, when he led the U.S. delegation to the coronation of Queen Elizabeth II.

Marshall took particular pride in being the first professional soldier to win the Nobel Peace Prize, a tribute to his role in the Marshall Plan. In his Nobel Lecture, he acknowledged his “inability to express myself with the power and penetration of the great Churchill.” He modestly suggested that the cause of peace could be advanced through public education, especially about the historical conditions that lead to war; greater understanding of other peoples and a lessening of national prejudices; and the acceptance and promotion of the fundamental values of human rights (which was not the same as persuading others to adopt the American form of government). A decent speech by a decent and impressive man, who now can be viewed in these Papers in the active twilight of one of the most distinguished lives in American history.