The Churchill Project - Hillsdale College > Articles > Books > 2020 > Daughters of Yalta by Catherine Katz: “A Story of Love and War”

Daughters of Yalta by Catherine Katz: “A Story of Love and War” 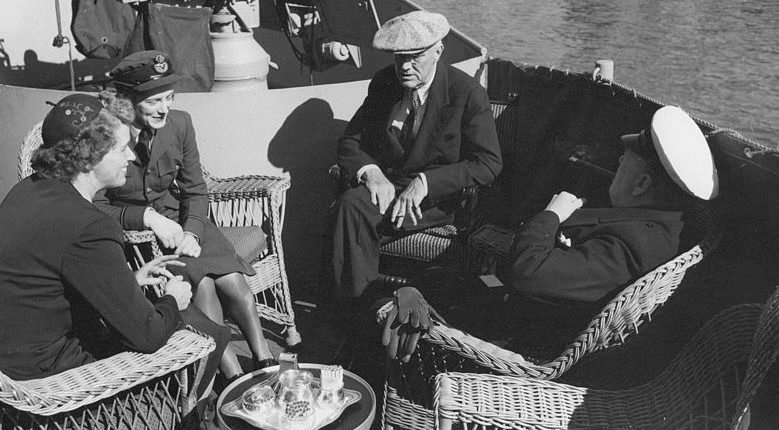 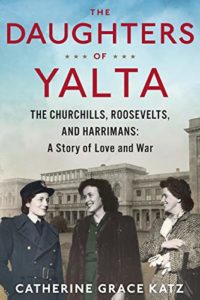 Catherine Grace Katz provides us with a pleasant surprise—an interesting addition to the several accounts we already have of the February 1945 Yalta summit conference. Here are Anna Roosevelt Boettiger, Sarah Churchill and Kathleen Harriman, nicknamed “the Little Three.” They were the daughters, respectively of Franklin Roosevelt, Winston Churchill and Averell Harriman, U.S. ambassador to the Soviet Union.

These women were among the conference’s 750 accredited participants. They did not directly participate in the crucial negotiations on the eve of victory, and Katz makes no such claim. But they did give significant personal comfort and aid to the men they had come to support.

They viewed the proceedings from the vantage point of shrewd insiders. Sometimes their fathers spoke to them of what had transpired at official meetings. Their ears were wide open to corridor talk during breaks in proceedings and at the inevitable rounds of official dinners.

Observers of a fraught scene

It is important to  imagine the atmosphere into which they plunged. Tensions among the principals were created by clashing interests, huge egos, and sheer fatigue. All had been under severe pressure for years of war.

Harriman was annoyed when the President neglected to reserve him a seat at the table for the first session. Secretary of State Byrnes threw a tantrum when not included in a session to which he’d have contributed little. Harry Hopkins steamed when he was replaced by Anna as her father’s gate keeper. He thought this prevented the President from doing the job to which he was elected. All three, unwilling to confront the President, blamed Anna for the slights.

These three women performed semi-official duties as hostesses. Anna added the duty of limiting access to her ailing father in an effort to preserve his waning energy. FDR was fading: at one point his heart doctor recommended his work day be limited to four hours. Anna could not reasonably enforce that rule at Yalta, but she always kept it in mind. The restriction created some tension with those clamoring to see FDR. Roosevelt would die a few months after the conference ended.

Sarah’s father, of course, famously remained in bed during the mornings and took long afternoon naps while FDR was working. Like everyone at the conference, Sarah was unaware of the President’s heart condition. It was not surprising if Sarah took unkindly to Anna’s regulation of the President’s time. Churchill’s offense at FDR’s semi-jocular remarks to Stalin, an effort to woo the dictator, also colored Sarah’s feelings toward Anna.

Nor was it remarkable if Roosevelt’s exclusion of Harriman from some meetings affected Kathleen’s dealings with Anna. Their relations were already strained, Katz tells us, because Kathleen was clearly the most accomplished of the three. She had been living in Moscow when her father was ambassador there. She spoke Russian and had extensive experience with tight Soviet security and Russian cabals. In January 1944, her father took her with the official group that toured the Katyn Forest massacre site. A credible journalist, Kathleen was well-regarded by senior members of the allied delegations since their days in London and Moscow. Katz says she was the “ranking female at the conference, an honor that, according to protocol, should have been Anna’s.”

To Anna, Kathleen was “so damn self-assured”—“perhaps more indicative of Anna’s insecurity,” Katz writes. (Perhaps not!) FDR failed to give Anna his invitees when it was his turn to host one of the official dinners. The Harrimans noticed her struggles, and using their knowledge, helped assemble the list and seating arrangement that recognized egos and seniorities. Stalin seemed aware of the role the women played. On his turn as host, they were among his invitees, and he topped that off with a personal toast to them.

The women did manage to work well together. They dined together at meals, dubbed “the children’s party.” In their free time they toured together the devastated, bombed-out Crimean towns, avoiding when possible their heavy-handed security officers. At one point the Soviets stopped Kathleen and Anna from touring Yalta. But their amicable relations did not blossom into enduring friendships. As Katz tells us, “The three daughters were not going to leave Yalta the closest of friends.”

Katz does not ignore the woman restricted to a cameo role: Svetlana, Stalin’s only daughter. Churchill had met her in Moscow in 1942, when he told the “shy” little girl that he too had a daughter. Svetlana understood English, and later sent Sarah a brooch. Sarah wore it at Yalta, thinking it might create some sort of bond. But Svetlana did not reappear at Yalta, and the next news of her came when she defected and became an American citizen.

Fortunately for Katz, all three women were inveterate letter-writers. It is a testimonial to their energy that they found the time at Yalta. Kathleen Harriman wrote long letters to her sister as well as to Pamela Churchill. Katz tells us that “hundreds of pages crossed” between these two women, Pamela still married to Randolph Churchill. She filed for divorce in December 1945 and, decades later, married Averell Harriman.

Sarah Churchill wrote home, mostly to her mother, with conference news and gossip. She assured Clementine that Winston was recovering from fever during his trip to Yalta. Anna wrote extensively to her husband John, then serving in the U.S Army.

Katz makes good use of these letters. She was also given early access to Sarah’s newly-opened archives, and Mary Soames’s diaries. There is much previously ignored or under-reported archival material, extensive interviews with family members, and scrapbook items. Katz is so thorough that she is able to tell us that Stalin sent Russian doctors disguised as army officers to Saki field, a stopping-off point en route to Yalta, to observe Roosevelt’s health and report it to him. That’s just one example of why this is a good read, and a contribution to our knowledge of the conference.

It is a shame that Katz was unaware of  Joan Bright’s papers. She was the extraordinary aide-de-camp to General Ismay, Churchill’s chief military assistant. Bright was instrumental in setting up the Yalta Conference. She knew everyone on the British and American sides. Her papers might have added still more important and interesting details. She too in a way was a “Daughter of Yalta.” Perhaps Daughters at Yalta would have been a better title, for these women were not of but at the famous wartime summit.

Katz has turned the role of three peripheral figures at the Yalta Conference into an interesting and informative book. She occasionally indulges in pop-psychology: Anna’s insecurity, her parents’ “complicated relationship,” Kathleen’s belief that the Harrimans were on a “higher plane” than the rest. Still, she has given us a readable, well-researched history of a turning point in world history. Until, of course, history turned again and unraveled much of what had been accomplished…

…But not all. Roosevelt’s United Nations still stands. Poland is again independent, no thanks to Yalta, and is lurching right at a pace that unnerves its EU colleagues. The Soviet Union is no more, although a revanchist Russian president is pushing for  Russia’s expansion. The British Empire that Churchill sought to preserve is reduced to islets and rocks.

Cita Stelzer graduated from Barnard College and was a special aide to New York Mayor John Lindsay and Governor Hugh Carey, before joining an economic consulting firm specializing in regulatory policy. She is the author of two works on Sir Winston: Dinner with Churchill: Policy-Making at the Dinner Table (2013) and Working with Winston: The Unsung Women Behind Britain’s Greatest Statesman (2019).