The best diarists are flawed individuals who exist on the fringe of events and are natural observers and acerbic wits. Snobbery helps too. Think Samuel Pepys, James Boswell, Alan Clark. Henry “Chips” Channon (1897-1958) has long been seen as one of these too. But it is only with the publication of these unexpurgated diaries, superbly edited by Simon Heffer, that we can truly recognise quite how perfectly he fits the type. 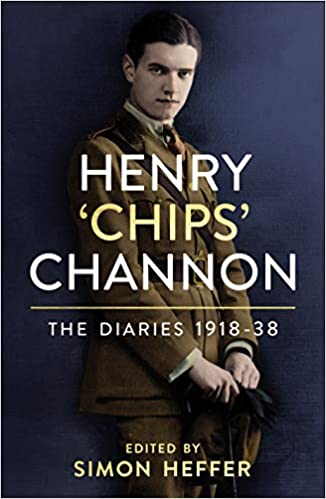 Born into a rich Chicagoan family, Channon fell in love with European culture as honorary attaché to the American embassy in Paris, where we find him when these diaries open in 1918. Living off his parents until 1933, he then married the heiress Lady Honor Guinness. He became Conservative MP for Southend in the 1935 General Election.

This first volume of his diaries ends two decades later in September 1938. By then Chips was parliamentary private secretary to Rab Butler, undersecretary at the Foreign Office. (The Foreign Secretary, Lord Halifax, was Lady Honor’s uncle.)

In 1967, the historian Robert Rhodes James edited a version of the Channon diaries covering 1934 to 1953. As this volume makes clear, he did a spectacularly bad job of it. Insofar as he was even allowed to see the originals rather than heavily redacted copies, Rhodes James bowdlerized the diaries disgracefully, later stating untruthfully in a preface that “the full diaries are not really scandalous and I omitted very little of historical value.”

The Channon family are to be commended for now allowing the full unexpurgated diaries to see the light of day, for they expose Chips as an extremely nasty piece of work who had something unpleasant to say about everyone he met. And he met everyone. On reading the Rhodes James version, Nancy Mitford described the diaries as “vile and spiteful and silly…. One always thought Chips was rather a dear, but he was black inside how sinister!” She did not know a fraction of it, as is now made clear by Heffer’s immensely scholarly edition.

Every person mentioned, intimation given and allusion made is thoroughly investigated and explained. This is only the first volume of three, which together will form an essential part of the library of anyone interested in 20th century politics.

“I feel caddish , even treacherous, keeping this diary from the eyes of my wife,” Channon wrote in one of his very many moments of searingly honest self-examination, “yet it is my one secret, or at least one of two.” The other one was either his bisexuality, or possibly the fact that he had married her for money. The fortune amounted to £100,000 a year (around £7.3 million in today’s money). This allowed them to live magnificently and give wild, decadent parties.

In these diaries, Channon takes snobbery to a truly pathological level. “Really I am only at home with royalties,” he says, seeming to despise even the grandest aristocrats. “The Douros were at luncheon and never have I met a more middle-class uninteresting common couple,” he writes of the future 5th Duke of Wellington. “How bourgeois…is it Sarah Huggins’s blood (their great-grandmother) or only inherited from their cook-like mother, indeed the old duchess is like a cockroach!!” There are nearly a thousand pages of this kind of vitriol and abuse. Something vicious, snobbish or gossipy is pretty much on every one of them. It is not always of the highest wit.

Channon’s hatred of his native America is visceral. “The word is never on my lips, rarely in my mind,” he claims, unconvincingly. “I never even dream of it and I don’t really believe it exists. I am not at all sure that ugly, horrible continent is not merely the invention of the Rothermere press.” In fact the land of his birth tormented him, and recurs often. ‘I’m always so ashamed of my American passport,’ he writes.

By contrast, Chips had three great attachments. The first was Paul, the Prince-Regent of Yugoslavia, who “is the love of my life…. In many ways he is the person I love most in all the world…with whom I am the nearest in sympathy.” The second was “George,” 6th Viscount Gage, with whom he visited Berlin in August 1928. “What a joy to share a room with someone one loves,” he writes. “And lying in bed talking, side by side, what a delight!”

Channon’s third great love—though in this case unconsummated—was for Neville Chamberlain, in whose government he served. “I am mad about him,” Channon wrote, “his caring gentleness.”

Hitherto, historians assumed that Channon’s support for Appeasement stemmed from the respectable, indeed honourable, Chamberlainite desire to avoid another war. These diaries show however that in fact Channon was—at least privately—a sympathiser of and apologist for the Nazis. “The atrocities in Germany cause very little excitement really,” he writes in August 1935…. The latest Jew-baiting, the beatings, the alleged sexual perversions and outrages—who cares? There is an outcry in the press, voilà tout.

“In spite of all, I am pro-German: I find myself mysteriously drawn towards the Teutonic race. Is it a reaction against my mother’s violent Francomania which poisoned my childhood?” When he read that Adolf Hitler had the same breed of Hungarian dog as him, “my heart warmed to him in spite of all those military operations which must, sooner or later, lead to war.”

Visiting the Berlin Olympics in August 1936, Channon applauded “the famous, fantastic Goering.” He performed the Nazi salute when Germany won medals, and sang the Horst Wessel Song: “It had a gay lilt.” He thought the Führer was “determined but not grim. One felt one was in the presence of some semi-divine creature. I was more thrilled than when I met Mussolini in 1926 in Perugia.” Little of this appeared in Rhodes James’ 1967 edition, nor the description of Joachim von Ribbentrop as “a genial man” or that the Nazis were “masters of the art of party-giving.”

Most reprehensibly, Channon visited a Nazi labour camp and fell for the oldest totalitarian trick of them all: “We had been told such tales of the hardships labour camps etc. entailed. Not at all: the camps looked tidy, even gay, and all the boys, all about eighteen, looked like the ordinary German peasant boy, fair, healthy and sunburned.” On his return he mused how, “England could learn many a lesson from Nazi Germany. I cannot understand the English dislike and suspicion of the Nazi regime.”

Disgracefully, none of this appeared in Rhodes James, who seems to have been working from a bowdlerized, often redacted, and sometimes rewritten version given him by Channon’s last lover, Peter Coats. To have agreed to work under those circumstances was profoundly unprofessional.

“He is always a very gracious host,” Channon wrote of Hitler. “Like everything he does, it seems, he entertains well.” Nonetheless, “Of the leaders Goering is the most lovable, he is large, flabby, mischievous (probably sexual[ly] vicious, for I saw in his grey eyes the look I know too well), intelligent, eunuch-y, undoubtedly vain and devilishly fond of power and display.” As for the regime’s victims, Channon lied: “The rich Jews, those at least who have never attacked the present regime, are left in respectable peace.”

“The destruction of civilization”

Predictably enough, Channon attacked the anti-appeasers freely. Alfred Duff Cooper was “too violently anti-Nazi.” Winston Churchill was a warmonger “and a devil and must not be trusted.” WSC was “obsessed, of course with the Nazi peril.” Chips simply did not believe such a peril existed. During the Munich crisis he declared: “The Sudeten Germans are justified in their demands and aspirations.” Later he rejoiced that “The foul Czechs have missed the boat.”

There was not a word of any of this in Rhodes James, nor Channon’s dread of Churchill: “Winston as Prime Minister would be worse than a war, the two together would mean the destruction of civilization.” For all that, Channon’s reputation is of course due for a fundamental reappraisal. Sir Robert Rhodes James’s cannot survive the publication of these explosive, unexpurgated diaries.

For all his gross misogyny, anti-Semitism, anti-Americanism, Nazi sympathies, and world-class snobbery, Chips Channon was undoubtedly an inspired diarist. However repulsive a figure he was, after devouring this volume, readers will be anxious for the next.

Andrew Roberts is Visiting Professor at the Department of War Studies at King’s College, London, the Mertz Visiting Research Fellow at the Hoover Institution, and a regular contributor to the Hillsdale College Churchill Project. His books include The Storm of War and Napoleon the Great (winner of the Grand Prix Fondation Napoléon). Dr. Roberts’s Churchill: Walking with Destiny (2018) is the only biography to merit two reviews by the Churchill Project. His biography of George III, The Last King of America, is to be published in the U.S. by Viking in November. This review was first published in The Critic and is republished by kind permission of that journal and the author.