The Churchill Project - Hillsdale College > Articles > Explore > Churchill's Character > Harold Begbie: “The Man Who Did God for the Westminster Gazette”

Harold Begbie: “The Man Who Did God for the Westminster Gazette” 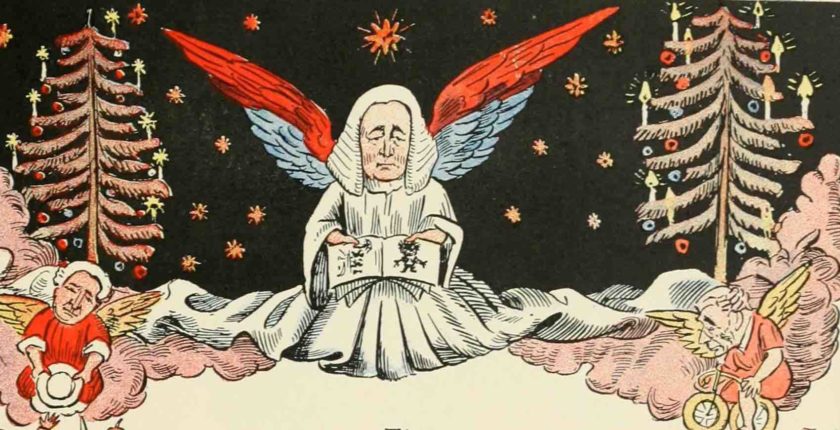 “The Political Struwwelpeter”: Begbie in 1899, detail from the image below. (Flickr, The Commons, public domain)

“He feels upon himself the hand of destiny”

The Hillsdale College Churchill Project’s updated bibliography of works about Churchill has produced gratifying interest in early biographies. Hillsdale President’s Club member Parker H. Lee writes about the very first, Winston Spencer Churchill by Alexander Maccallum Scott, published in 1905. Scott produced an expanded edition in 1916 and a modern reprint is available. “The remarkable thing about the book,” Mr. Lee writes, “is that Churchill’s political future was predictable to MacCallum Scott and others around that time.” One those others was Harold Begbie—of whom more anon.

How many people deserve a biography at age 31? Maccallum Scott had Churchill’s persona right, years before it mattered. WSC’s salient features, he wrote, were “will, courage, originality and magnetism…. He repels as much as he attracts…. He feels upon himself the hand of destiny.”

“It’s easy enough to see things like that today,” Mr. Lee observes—“but in 1905?” And when Maccallum Scott updated his book in 1916, Churchill looked like a busted flush. He’d gone to fight on the Western Front after six idle months with no voice in the war, having been cashiered from the Admiralty over the Dardanelles disaster.

In 1988, Sir Alistair Cooke spoke about his perception as a young man of Churchill in those years. Cooke turned 21 in 1929, just as Churchill began another period as a rejected politician. “Of course his own account of his going ‘into the wilderness’ is dramatic,” Sir Alistair said. “Churchill is nothing if not a dramatic writer. But the political Churchill was not dramatic. If anybody asked us then, ‘Where’s Winston Churchill?,’ we would say: ‘In the House of Commons, but not doing very much, because he’s had his day.’”

Begbie: “Gentleman with a Duster”

Standing athwart history saying “no” was Harold Begbie’s The Mirrors of Downing Street in 1921. Its byline then was “Gentleman with a Duster.” Few people knew the author’s real name. Alistair Cooke described Begbie as “the man who did God for the Westminster Gazette.”

Begbie was a Churchill-like study in contradiction. A journalist who once served as ghostwriter for Antarctic explorer Ernest Shackleton, he gravitated toward politics. Originally a Liberal reformer, he later drifted to the Conservatives. Broad Church and hostile to ritual, he backed Irish Home Rule and Irish Catholicism. He attacked Darwinism but was not anti-evolution. He lamented the state of the underprivileged but ardently supported the Empire. Alistair Cooke mainly remembered Begbie’s character sketches, “which had an intensity and eloquence of a kind I don’t think we see today. He wrote this, astoundingly for the time—yet it could also have been written ten years later”…

With the fading exception of Mr. Lloyd George, Mr. Winston Churchill is perhaps the most interesting figure in the present House of Commons. There still clings to his career an element of promise and also of unlimited uncertainty….

Churchill was then 47. Begbie was hedging his bets a little, because when he wrote that, Churchill had somewhat rehabilitated himself. Since 1917 he had held four offices of State in the Lloyd George government. He was then redrawing the map of the Middle East and negotiating the Irish Treaty. But few beside Begbie believed Winston Churchill might one day lead a great cause.

“He would eat out his heart in Paradise”

Let us look a little more deeply into what Harold Begbie saw:

From his youth up, Mr. Churchill has loved with all his heart, his soul, his mind and strength three things: war, politics and himself. He loved war for its dangers, he loves politics for the same reason, and himself he has always loved for the knowledge that his mind is dangerous. Dangerous to his enemies, to his friends, to himself. I can think of no other man who would so quickly and so bitterly eat out his heart in Paradise.

the unifying spirit of character which alone can master the antagonistic elements in a single mind. Here is a man of truly brilliant gifts, but you cannot depend upon him. His love for danger runs away with his discretion. I am not enamoured of the logic of consistency; on the other hand, who can doubt that one who appears this moment fighting on the left hand and at the next moment on the right creates distrust in both armies? His power is the power of gifts, not character. Men watch him, but they do not follow him.

“That sounds today rather savage,” Sir Alistair said. “It wasn’t really, but it does sum up the way people of all parties felt about him then.”

“Saul on the way to Damascus”

Begbie suggested that Churchill’s faults were the result of “a forcible and impetuous temperament.” He allowed that these might be expected to diminish with age, and that “character does not emerge from the ashes of temperament.” Then he wrote, with extraordinary prescience:

It is not to be thought that Mr. Churchill is growing a character which will presently emerge and create devotion in his countrymen. Character for him must lie in those very qualities which are now chiefly responsible for his defects—his ardour, his affectibility, his vehemence, his impetuous rashness, his unquestioned courage.

All Mr. Churchill needs is the direction in his life of a great idea. He is a Saul on the way to Damascus. Let him swing clean away from that road to destruction and he might well become Paul on his way to immortality. This is to say, that to be saved from himself. Mr. Churchill must be carried away by enthusiasm for some great ideal.

Harold Begbie died in 1929, eleven years short of that great ideal. Professor Warren Kimball, a scholar of Churchill and Roosevelt, understands what Begbie foresaw: “A Hitler dominated Europe provided that enthusiasm. Churchill wasn’t Prime Minister in 1939, when Britain declared war on Germany. But it was his war from then on. I’d suggest that the great ideal was as Lord Palmerston always advised: having a genocidal sociopath as the enemy was an invaluable asset—though not the only one.”

Ever since I first met him, when he was still in the twenties, Mr. Churchill has seemed to me one of the most pathetic and misunderstood figures in public life. People have got it into their heads that he is a noisy, shameless, truculent, and pushing person, a sort of intellectual Horatio Bottomley of the upper classes. Nothing could be further from the truth….