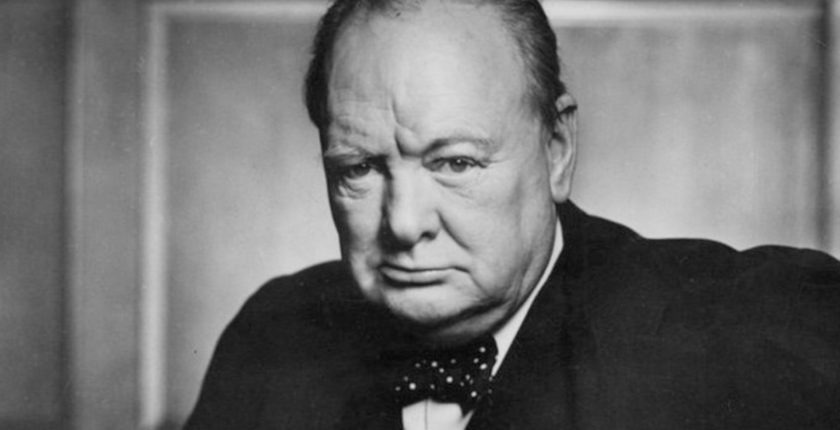 In 1931, The Strand Magazine published Churchill’s essay “Mass Effects in Modern Life,” later published in his Thoughts and Adventures.1 As James W. Muller reminds us in his introduction to the latest edition, Churchill did not hesitate to bring his practical experience and reflection to bear on “the largest human questions of our age.”2 Churchill appreciated the benefits of material progress, but questioned “the results [of technological progress] upon national character and psychology.”3 The essay mentions “a marked lack of individual leadership,” Churchill wondering whether democracies were squandering “the accumulated wisdom and treasure of the past.”4

Similar considerations may have influenced Churchill’s great-grandson, Jonathan Sandys, to collaborate with pastor and journalist Wallace Henley to write God & Churchill, which is subtitled, How the Great Leader’s Sense of Divine Destiny Changed His Troubled World and Offers Hope for Ours. Their work is an intriguing patchwork of history, biography, historical thought-experiment, and bible study, published to provide hope and inspiration for “a renewed vision for God’s work in the midst of our troubled age.”5

This book does not aim to be a thorough study of Churchill’s thoughts on religion. Both the authors and contributors, which include statesman James Baker and columnist Cal Thomas, openly acknowledge that Churchill was not “a deeply religious man” (xvii) or a “pious religious devotee” (91). For a more rounded picture, readers need to supplement their reading with other sources, including Churchill’s own writings.

The authors’ research, therefore, reveals “a testimony not as much to Churchill’s spirituality as…to God’s sovereignty” and their book reflects “not that Churchill had particular beliefs about God but that God, in His wisdom, was able to use this ordinary human being for extraordinary purposes” (227). (This reviewer would contest that much about Churchill was not strictly “ordinary” but concedes he was of the same genus and species as the rest of us.)

Readers who know Churchill’s writings well will miss the nourishing richness and complexity of entire texts as the authors mine them for shorter, though accurately reproduced excerpts to serve their larger purpose: to understand how God worked through Churchill’s life, and to highlight important characteristics which enabled the statesman to fulfill his destiny. Even short quotations glimmer on the page and are a pleasure to encounter.

When presenting biographical material, they interweave lessons or text from the Bible into well-written summaries of some of the most famous episodes of Churchill’s early life through World War II, seeking to reinforce a sense of the miraculous in his several brushes with death and other seeming coincidences. They encourage that the reader view events as guided by the “unseen hand” of God (57)—which Churchill himself speculated might have influenced some of his narrow escapes.

Contrasting with English religious beliefs and traditions, the book discusses Hitler’s spirituality (or lack thereof), and spiritual failings of Nazism including its embrace of scientism and utilitarianism (133-52; this discussion would be richer if it drew on a wider range of sources); and the corruption of German churches during the Third Reich (153-64). World War II emerges as a critical battle for the preservation of “Christian civilization” and Churchill as its unlikely, though predestined, leader to victory.

The narrative often takes on the tone of a Bible study. For example, in one instance of exploring the language of biblical text, the authors write: “we understand what righteousness may have meant to Churchill when we see it in the original language of the New Testament” (96; italics are in the original text). This is followed by an excerpt from a 1933 Churchill speech which is not overtly religious but speaks to the ethical conduct in a democratic society. Situating political speeches in the context of Biblical study is not always a perfect fit, but can stimulate worthwhile thought in many contexts.

The authors concede that Churchill’s definition of “Christian civilization” was not meant to be exclusive of other religions or their followers, but other important, if inconvenient, historical details are left out (94). Sandys and Henley refer often to a 1931 Churchill essay on Moses (also in Thoughts and Adventures). A note in the latest annotated edition, reminds us that while “Churchill thought well of the essay,” it was “almost surely ghostwritten” by a Rhodes Scholar reading theology at Oxford, recommended for the purpose by Churchill’s friend and scientific adviser, Oxford professor Frederick Lindemann.6 Another historical tidbit not included, but which would add important nuances to the conversation, include this passage from the first volume of Churchill’s The Second World War:

The Sermon on the Mount is the last word in Christian ethics. Everyone respects the Quakers. Still, it is not in these terms that ministers assume their responsibilities of guiding their States . . . There is however one helpful guide, namely, for a nation to keep its word and to act in accordance with its treaty obligations to allies. This guide is called honour. It is baffling to reflect that what men call honour does not correspond always to Christian ethics.7

Throughout the final sections, including “The Core Principles of Christian Civilization” (118) and “Beyond the Beatitudes” (100), the authors follow profound and thoughtful quotations of Churchill with musings and arguments entirely their own. In the final pages, they seek to explore “The Underpinnings of Churchill’s Composure” (196) in a chapter evaluating “How Churchill Kept Calm and Carried On” (191) during World War II. Here they repeat that Churchill was “a man of faith” despite “not being an overtly religious man” who “believed in God’s ultimate providential care−for himself and his nation” (196), and segue into a chapter on “Churchill and the Character of Leadership” (211) where they praise his sense of destiny, courage, and perseverance as a model to which we should all seek to aspire.

The final chapter seeks to provide “help and hope for our times,” by repeating the authors’ belief that “Churchill’s life is an example of how God dynamically engages with human events by intervening at critical junctures to guide the course of history” (229) and emphasizing the importance of Churchill as “a willing and available leader with an intuitive sense of divine destiny” (236; italics in original text).

The book is clearly inspired by the heartfelt faith of the two authors and the sincerity of their desire to explore the life of a 20th century hero as viewed through the lens of God’s work and His word as revealed in the Bible. It is not a walk through the variegated garden of Churchill’s mind on religious subjects, as too much is left out. Clearly Churchill, personally and professionally valued religion, as did George Washington, who in his farewell address said, “…reason and experience both forbid us to expect that national morality can prevail in exclusion of religious principle.”8

Churchill cherished the universal values taught by Christianity and the Bible. There is room for more discussion on the bare bones of his deeply-held personal beliefs. The book demonstrates yet again why Churchill is such an excellent figure around which to gather enlightened minds, young and old, where he can serve as a rich springboard for engaging and nourishing discussion, a tradition that will hopefully continue long into the future…