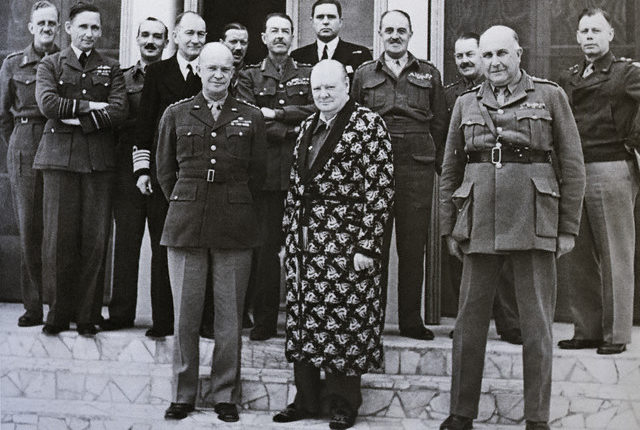 In 1966 Randolph Churchill published the first narrative volume of Winston S. Churchill, known ever since as the “official biography.” (This is something of a misnomer, since the Churchill family never stipulated what the author of “the great work” might say.) The eighth and final narrative volume was published in 1988. In tandem with the narrative volumes came a series of “companion” or document volumes. They appeared at an ever-decreasing pace, since publishers showed little sustained appetite for producing them.

By 2000, the documents had progressed only through 1941. The hiatus ended in 2006, when Hillsdale College took on the enormous task of completing the document volumes, reprinting all previous volumes, and keeping the prices modest. And so we arrive at Fateful Questions, Document Volume 19—a key part of the saga—leaving four volumes to go until completion.

There are many facets to this monumental reference. Let us deal first with the book itself. As time and the series progressed, the Document Volumes became ever larger, with more and more information covering shorter and shorter time frames. Document Volume 1 covered the first twenty-two years of Churchill’s life in a crisp 678 pages. Fateful Questions, covering eight months, occupies over 2700 pages. And here Hillsdale is to be commended for its progress over problems created by the sheer bulk of these World War II books. Document Volume 18 (2400 pages) suffered from thinness of paper, and associated bleed-through of content from the other side of the page. Now, while cramming in 200 more pages, bleed-through is much reduced and the text more readable. True, a book this size difficult to hold in a normal reading position. But it lays open perfectly on a flat surface. As Churchill said to his doctor about his History of the English Speaking Peoples: “Look Charles, it opens like an angel’s wings.” It is a triumph of the binder’s art. Shortly there will also be an electronic edition, a boon to researchers. 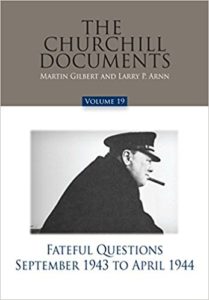 Return with us now to the crucial period September 1943 to April 1944. The prior volume, One Continent Redeemed, saw Africa cleared of Axis forces. Here the scene shifts to the invasion of Italy and planning for the Normandy landings, while the United States slowly expands operations in the Far East and Pacific, and the “Big Three” meet for the first time at Teheran.

Clearly this is not a volume where one can review prose style. What must be noted is the quality of the document selection. Although Churchill is the source for most of the material—it is his biography, after all—Dr. Arnn and his team follow Sir Martin Gilbert’s superb example and draw on material from a multitude of sources. This provides a tremendous sense of balance. We find the voices of family and friends, allies and antagonists. The editors wisely continue the past approach of providing potted biographies of all individuals and many places and events, usually in a footnote to the first reference. Footnotes fall happily on the same page, not bunched up at the back of the book.

In a short review it is impossible fully to summarize the scope of this behemoth. Here are some major topics I took away from my own dive into it.

The first is how fully Fateful Questions skewers the canard that Churchill was lukewarm about D-Day. Of course he had misgivings about certain aspects. Who among his colleagues did not? But his concern was to get it right, not to avoid it. Expressing horror at seeing troops and resources idle, he demanded the maximum from what was available. He pestered colleagues unmercifully to squeeze time and material, for example, to retake the lost Greek islands. Likewise, he was under continuous pressure to find grain for a starving India.

The search for shipping is a theme of this volume. With the luxury of hindsight it is easy to carp about actions untaken, chances missed. Only when you look at the correspondence passing back and forth do you realize how, so often, success hinged on details. It was no problem to raise troops to invade France. But how to transport them across the channel? How to find the vessels to carry the equipment, to land the tanks? How to coordinate it all?

The redemption of Africa essentially signaled the “beginning of the end.” Yet there was little diminution in the resistance of German forces. The intended decisive blow against Italy was launched amid high hopes, but within weeks it was stagnating in the mud of winter. Churchill’s growing frustration at the lack of progress shines through his communications. While he was always willing to back his military commanders to the hilt, he could be abrasive in holding them to their task.

Amid his many preoccupations were demands from the Russians, holding down the bulk of German forces on a huge front. This required further drains on the available resource pool, against Stalin’s demand that his partners make good the invasion they promised at Teheran. Stalin was not a tactful ally. His armies were doing vital work, but several of his telegrams raised Churchill’s blood pressure a notch or two above what his doctor might have liked. And blood pressure aside, Churchill’s health was a growing concern. Would he survive the war? His family and colleagues worried.

There are many aspects to these subjects, and I note only a few of many. Fateful Questions is a documentary. It makes no direct argument. But it provides a wealth of detail that was previously not widely available for the reader to use to draw conclusions. Therein lies the incomparable value of The Churchill Documents.

More than a reference

It would be easy to regard this as another installment in a huge dump of documents, a paradise for historians, researchers, and casual “dippers,” and to lavish upon it deserved praise. But is that all there is? I think not.

In the 1970s editor Arnn, then the late Sir Martin Gilbert’s research assistant, joked that probably only a few dozen people would ever actually read The Churchill Documents from end to end. I proudly claim my place as one of those two dozen, but suspect that the real number is exponentially higher. In any case, Sir Martin had a ready answer: “It makes no difference. What matters is that the documents are published. They are here. No one will be able to write about this period without reference to them.”

Fateful Questions is, however, more than documentation. It is a story. Offered here are the thoughts of men and women who were living in those history-making days. It is well to remember that when these words were spoken, written or dictated—sometimes late at night in the comforting privacy of a diary—they did not know how it all would turn out. Only recently they had faced the prospect of imminent extinction—an existential threat to everything they held dear. By 1943-44, although a sense of confidence was building, the end was far from assured. The logistics of victory were an appalling challenge and burden.

I was brought up in Britain in the days of the BBC Home Service (now Radio 4) where one of the staple offerings was drama, my favorite. Reading Fateful Questions reminds me of the enjoyment I used to get from the radio. The compelling story rolls along, with no narrative to get in the way. One by one the characters appear and become familiar. The storyline starts, perhaps a little obscurely, but becomes increasingly clear as time passes.

Make no mistake though. The Churchill Documents are not volumes to be devoured in a couple of brisk evenings. I tended to allow myself around fifty pages a day. At the end of each reading, I slowly re-entered the modern world, feeling that I knew and understood that time just that little better. When the volume finally draws to a close, there is a bittersweet feeling of loss. But for the time being, we may look forward to another one.

An overly romantic way of looking at what to many is a mere reference volume? Maybe, but go ahead. Treat yourself.

Mr. Turrell has recently retired from a lifetime career in Information Technology. He is a longtime Churchill bibliophile and collector.