The Churchill Project - Hillsdale College > Articles > Q & A > Understanding Churchill > “The fascists of the future will call themselves anti-fascists.” Not WSC.

“The fascists of the future will call themselves anti-fascists.” Not WSC. 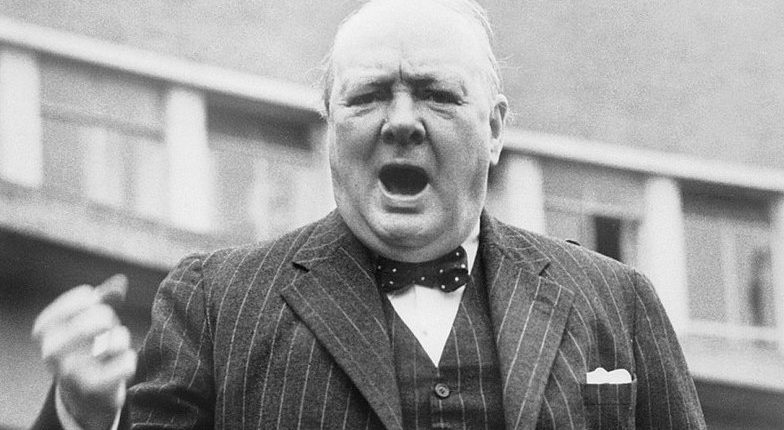 Churchill campaigning at Uxbridge, 27 June 1945. He had many fiery things to say about the opposition, but he refrained applying “fascists” in the ad-hominem sense. (Imperial War Museum, public domain)

It comes to us frequently of late, and is always the same: “I’m a reporter writing to ask whether a certain quote attributed to Winston Churchill was actually spoken or written by him.

The quote is: ‘The fascists of the future will call themselves anti-fascists.’ There does not seem to be credible information on the internet linking those words to Churchill, but I would appreciate your input.”

Manufacturing Churchill quotes is a parlor game. Nigel Rees, host of the BBC program Quote…Unquote, describes what he calls “Churchillian Drift.” It’s a proces whereby a quote’s originator “is elbowed to one side and replaced by someone more famous. So to Churchill or Napoleon would be ascribed what, actually, a lesser-known political figure said.” Churchill, Napoleon, Lincoln, Gandhi, Martin Luther King Jr.—they are all victims. (As is indeed Yogi Berra. “I never said half the things I said,” Yogi said—allegedly.)

Right now, the popular quote about fascists and anti-fascists is almost as frequent as that hardy perennial, “If you’re going through hell, keep going.” Churchill never said either. The Churchill Project has a way to verify this. We have scanned some 80 million published words by and about Churchill into a searchable facility for scholars. Churchill himself accounts for about 20 million (books, articles, speeches, letters, papers), including 23 volumes of The Churchill Documents. There are also 60 million words of biography, specialized studies, related works on the World Wars, and memoirs by Churchill’s associates. Of course some quotes in these secondary sources are hearsay, so one has to consider the source.

Politically, those words are in vogue. It’s a popular reflex to call someone with authoritarian impulses a fascist. Attaching it to Churchill gives it credibility. Like most examples of “Churchillian Drift,” it is quite impossible to track. Some begin with words he said, distorted out of recognition. Others are simply made up. Churchill quotation books and websites abound, but any item without solid attribution is suspect. Nearly 150 are listed on my blogsite—with notes as to their origins (if known).

We are very confident that Churchill made no pronouncement about fascists of the future. Not only because the quotation or parts of it does not come up in digital searches; but because Churchill didn’t use “fascist” in the generic sense—or as a pejorative against political opponents, as so frequently today. In most of the 97 times he used the word, he referred to specific entities. Examples: the pre-World War II Yugoslav Anti-fascist Coalition, or the postwar Italian Anti-fascist Council.

For Churchill to label a political opponent a fascist would be inconceivable. We might think he would have said that, say, about Clement Attlee, his socialist opposite and successor as Prime Minister in 1945. But Churchill would never think of it.

One of the striking things about The Churchill Documents, volume 22 (1945-51) is the civility of their discourse. In debate, Churchill criticized Attlee fiercely and often, and these criticisms are in the volume. Several times in the House of Commons, he called Attlee’s competence into question. Yet they both worked to keep channels open with each other, where mutually aligned in the nation’s interest. Churchill would brook no generic criticism of Attlee, who certainly could be accused of authoritarian impulses. On the floor they went at it hammers and tongs. Off the floor there was mutual respect. It was a relationship of cordiality and fairness.

“The Creeds of the Devil”

There is a third reason why Churchill would not have said this popular phrase. To speak in sweeping terms about “fascists” doesn’t even sound like him. It’s too pat, too simple; not natural nor realistic. Churchill’s views on extreme and tyrannical government were specific. They first occur in a beautiful 1937 essay, “The Infernal Twins.” In it he compares Nazism with Communism, then takes pains to distinguish Italian fascism.

Nazism and Communism imagine themselves as exact opposites. They are at each other’s throats wherever they exist all over the world. They actually breed each other; for the reaction against Communism is Nazism, and beneath Nazism or Fascism Communism stirs convulsively.

Yet they are similar in all essentials. First of all, their simplicity is remarkable. You leave out God and put in the Devil; you leave out love and put in hate; and everything thereafter works quite straightforwardly and logically.

They are, in fact, as alike as two peas. Tweedledum and Tweedledee are two quite distinctive personalities compared to these two rival religions.

I am reminded of the North Pole and South Pole. They are at opposite ends of the earth, but if you woke up at either Pole tomorrow morning you could not tell which one it was. Perhaps there might be more penguins at one, or more Polar bears at the other; but all around would be ice and snow and the blast of a biting wind.

Extending his geographic analogies, Churchill contrasts these totalitarian forms of government with his own and those of the great democracies:

I have made up my mind, however far I may travel, whatever countries I may see, I will not go to the Arctic or to the Antarctic regions. Give me London, give me Paris, give me New York, give me some of the beautiful capitals of the British Dominions.

Let us go somewhere where our breath is not frozen on our lips because of the Secret Police…somewhere where there are green pastures and the shade of venerable trees. Let us not wander away from the broad fertile fields of freedom into these gaunt, grim, dim, gloomy abstractions of morbid and sterile thought.

Next Churchill explains specific differences, applying the word “fascist” only to Mussolini:

There are, of course, differences between the dictatorships. Yet they are largely discounted by one significant fact. It is easy to imagine Mussolini or Hitler as head of a Communist State or Stalin as Fascist Duce or Führer. Nothing in Communism or Fascism, as we know them, or in the characters and records of these three men, makes such a situation incredible.”

It is fair to conclude Churchill took pains not to use the generic term “fascists” as an offhand dismissal of those with totalitarian ideas. He was always careful to describe which fascists he was talking about—though he regarded both those of the Left and the Right as equally repugnant in their denial of liberty.

“The Creeds of the Devil” was published in The Sunday Chronicle, London, 27 June 1937, followed by a sequel, “A Better Way,” on 4 July. The two essays were combined under the title “The Infernal Twins” in Collier’s (USA) on 3 July 1937. Republished in Michael Wolff, ed., The Collected Essays of Sir Winston Churchill, 4 vols., (London: Library of Imperial History, 1975), II, 394-97. A transcript is available by email from [email protected]