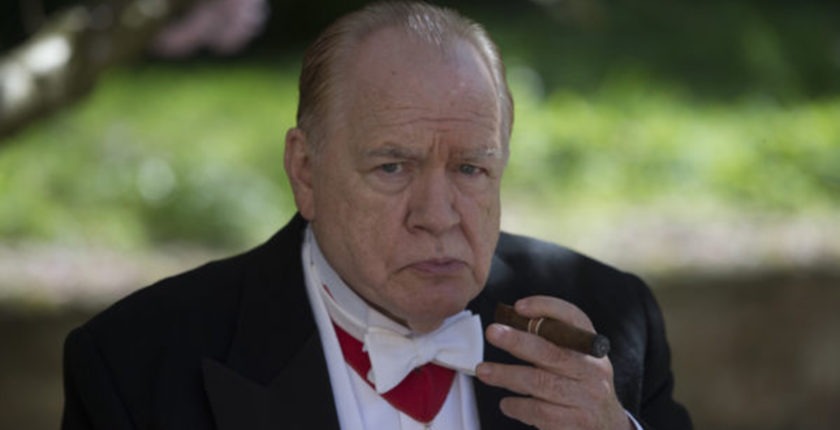 The film “Churchill,” to be released in June, purports to tell the story of Winston Churchill’s life in the week running up to Operation Overlord, the attack on the Normandy beaches which began on D-Day, 6 June 1944. Well-acted by Brian Cox and Miranda Richardson, and with some very good photography and music, it concentrates on Churchill’s opposition to the operation on the grounds of the numbers of deaths it would involve, and attempts an insight into Churchill’s psychology at that crucial stage of the Second World War. The only problem with the movie—written by the historian Alex von Tunzelmann—is that it gets absolutely everything wrong. Never in the course of movie-making have so many specious errors been made in so long a film by so few writers.

The major error of fact, of course, is that although Churchill did indeed oppose an over-hasty return of Allied forces to north-west France in 1942 and 1943, by the time of D-Day in 1944 he was completely committed to the operation. Indeed in the final briefing for senior officers on 15 May, General John Kennedy noted in his diary how Churchill spoke “in a robust and even humourous style, and concluded with a moving expression of his hopes and good wishes. He looked much better than at the last conference, and spoke with great vigour, urging offensive leadership, and stressing the ardour for battle which he believed the men felt.”

In this movie, however, Cox’s Churchill is instead shown shouting at his generals, his wife and secretaries, sweeping food, plates and cutlery off the breakfast table onto the floor, and even praying to God on his knees, all because he wants to stop Operation Overlord but had been overruled by a cabal composed of Generals Dwight Eisenhower, Bernard Montgomery and Alan Brooke, who despise him. The scene where he prays for bad weather for D-Day (“Please, please, please let it pour tomorrow. Let the heavens open and a deluge burst forth such as has never been seen in the English Channel. Let the sea churn into peaks and troughs and tidal waves!”) is particularly puerile, considering the hopes that Churchill really had for the success of the operation at the time.

If Ms von Tunzelmannn had more than a passing understanding of British military-civilian relations or indeed the British constitution she would know that as both prime minister and minister of defence Churchill had the ultimate power over deciding whether Operation Overlord should go ahead, unless this film is attempting to claim that there was a military coup in Britain in 1944. The movie is easily incoherent enough to be claiming that, though without the viewer realizing as much. The anti-American statements von Tunzelmann puts into Churchill’s mouth were also precisely the opposite of his warm views about the special relationship in June 1944.

Brian Cox presents Churchill as a petulant, ill-tempered, sarcastic, unpleasant, decrepit, oafish drunken has-been who was trying to disrupt the war effort and was violently opposed the campaign that was ultimately to liberate Europe, and so therefore was totally wrong on almost the single most important military decision of the war. It is a depiction that Dr. Goebbels would have been delighted with, but it flies full in the face of every single account left by those around Churchill at that transcendental time in world history. He is shown shouting at his secretary on 3 June 1944, for example, the very day that his actual secretary wrote in her diary: “He looked anxious, but he was amiable.”

In this film Clementine slaps Churchill in the face and abuses him—even  packing her bags with the intention of leaving him—whereas even the most cursory knowledge of their very happy marriage makes that a monstrously unfair and completely untrue depiction. In real life—as opposed to in Ms. von Tunzelmann’s perverse fantasy—on 5 June Clementine wrote her husband a note saying, “I feel so much for you at this agonizing moment—so full of suspense.” Hardly the note of an unsupportive wife contemplating divorce.

In this movie Churchill asks Clementine about their relationship: “Is this about the war or is this about you and me?” and talks about their sex life: “I know I haven’t been fully a companion to you. I haven’t made you happy, have I?” Modern clichés infest the screenplay, most of them cringe-making and profoundly unhistorical. Sadly for such a funny man as Churchill, there is no hint of humour in the entire film, unless you count the absurdity of his remark to Clementine: “I would understand if you left me. I’d leave me if I could.”

In this sad and pathetic caricature of the great events of June 1944 we see General Montgomery calling Churchill a “bastard” to his face and accusing him of  “doubt, dithering and treachery”; the prime minister isn’t even shown the detailed plans for D-Day until 3 June 1944, whereas in fact he had known them for months beforehand; Churchill is then depicted as  attempting to change the plans at the last minute to include attacks on Bordeaux and in Italy; he is depicted as being sarcastic and dismissive towards Field Marshal Jan Christian Smuts, a man he greatly admired, and saying “We shall never surrender” in 1944 (when there was no question of Britain surrendering) rather than in 1940 (when there was).

King George VI (played by James Purefoy) leaves a meeting of the Combined Chiefs of Staff because the argument was getting too heated; Churchill works lying on his back on the floor, then sits quietly at the rear of meetings that in real life he chaired loquaciously. On at least twenty occasions Churchill is shown lamenting the bloodshed involved in the 1915 Gallipoli amphibious operation, as though the World War II operations of Dakar, Salerno, Anzio and Dieppe—of which I doubt Ms von Tunzelmann has ever heard—had never taken place.

It doesn’t stop there; Churchill credits General Alexander for taking Rome when in fact he was famously beaten to it by the American General Mark Clark. Eisenhower shouts at Churchill “You, sir, must be stopped!” which would have led to an international incident if it had ever happened. Absolutely not one of these things I’ve listed ever took place. There was a moment when I wondered whether the whole movie wasn’t in fact a sophisticated comedy satirizing bad war films, rather than in fact being by far the worst war film I have ever seen.

When bad movies get large things wrong they tend to get the small things wrong too. In this farrago, Cox/Churchill wears white tie and tailcoat in the afternoon; Montgomery is given a field-marshal’s uniform when he was at the time a general; Eisenhower wears British campaign medals; Churchill wears workmen’s overalls rather than his velvet siren-suits; Combined Chiefs of Staff top-secret planning meetings are held in the open air on the lawns of country houses; the great Field Marshal Smuts, prime minister of South Africa and member of the War Cabinet, is presented as little more than a butler; the King salutes the man who opens his car door; Churchill shouts bad-humouredly at an American servicewoman; Montgomery addresses him as “Churchill,” and Churchill says of Montgomery “That puffed-up little shit; the men won’t follow him.”

The film is so low-budget that the American Joint Chiefs of Staff are portrayed as not including an airman, and the RAF chief meteorologist Group Captain James Stagg is also asked to take the group photographs of the Chiefs of Staff, as though he wouldn’t have been rather busy doing other things the day before D-Day. Furthermore, Ms. von Tunzelmannn seems to labour under the impression that Churchill listened to battles being broadcast in real time over the radio; that Royal Navy midshipmen were put ashore in the first wave of attacks on Juno beach and were able to send messages back to their sweethearts that same day saying they loved them; that King George VI flew aeroplanes in the Great War (“Bloody hell, that was exciting,” he tells Churchill); that Churchill drank whisky because “This is the only thing that brings me peace,” and most extraordinarily of all that Churchill was against the reinforcing of the Gallipoli expedition in 1915—“I tried to stop the Gallipoli campaign. God knows I tried”—whereas in fact he tried hard to execute it.

The speeches Brian Cox is made to say are cod-Churchillian at best. “Hitler is trying to menace us with fire….This is not a war for glory, it is a war for freedom….The most important thing in a war is for people to feel truly united,” and so on, and so predictably on.

As a Churchill biographer I never thought I would be bored by a movie about him, but this one achieved that with its interminable periods of longeur. At one point he puts his hat on a stick and waves it at the waves on a beach. It was meant to be poignant but was only farcical. Even when he drinks a glass of water he is made to say: “Oh, how I wish it was scotch. Oh well.”

Ms. von Tunzelmannn has written some good history books, though not about the First or Second World Wars. She also wrote one called “Reel History: The World According to the Movies.” Here she wrote: “From ancient Egypt to the Tudors to the Nazis, the film industry has often defined how we think of the past. But how much of what you see on the screen is true? And does it really matter if filmmakers just make it all up?” She clearly thinks it doesn’t matter, but in fact the power of Hollywood to mould public perception of important moments of the past means that it is a disgrace that the public’s money through Creative Scotland, The National Lottery and the British Film Institute should have been spent denigrating the greatest of civilization’s heroes in this way.

Of course all films have to take liberties with the truth, especially low-budget ones with a cast of about a dozen, like this one. But Ms. von Tunzelmann—who once had a column in The Guardian that attacked movies for their historical errors—has twisted the truth about Churchill and D-Day in a truly repulsive way, without ever hinting to the viewer that this is a totally untrue account. Indeed in the opening and closing credits it attempts to present the drama as factual. It is not; it is fraudulent. The film doesn’t seem to have had an historical consultant. Never has a movie needed one more.

One is prompted to ask why Ms. von Tunzelmann did not just tell the true story about a man and a military operation that was packed with genuine drama, excitement and courage of such an extraordinary order that it would command universal attention, instead of producing this tripe that can only bring universal derision? When this film states of Churchill at the end: “He is often acclaimed as the greatest Briton of all time,” it seems clear that its makers want the audience’s reaction to be: “But he can’t be great, because he got D-Day so badly wrong, the moronic old drunk.” It’s a foul slander, of course, and I suspect they know it.

There is a sense of profound decadence in any society that dishonours its greatest heroes; if this movie is anything but a terrible flop, ours will fully deserve its decline and fall.

About the Author: Andrew Roberts is the author of Masters and Commanders: How Four Titans Won the War in the West and Storm of War: A New History of the Second World War. His latest work is Napoleon: A Life. He is now writing a new biography of Winston Churchill. This article first appeared in Heatstreet.com, and is reprinted by kind permission of the author and publisher.