What Good’s a Monarchy? Churchill’s Case for an Anachronism 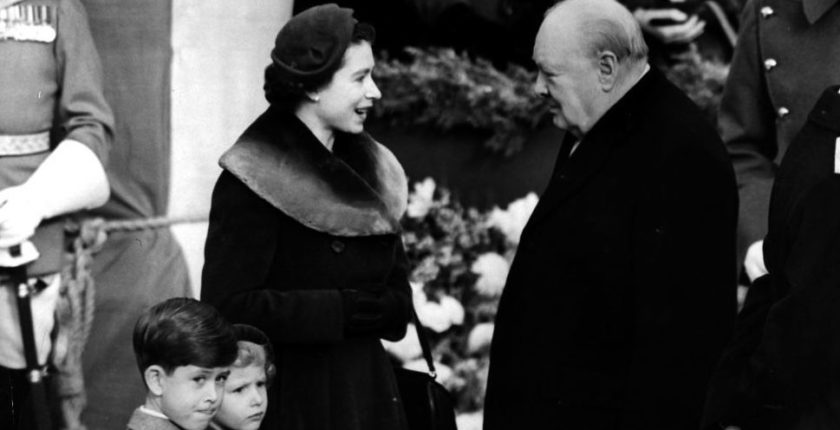 Churchill took pleasure in describing himself as neither more or less than the Sovereign’s first minister. Here he greets Her Majesty, Prince Charles and Princess Anne, 10 February 1953. (Crown Copyright expired, public domain)

On monarchy: “It is wise in human affairs, and in the government of men, to separate pomp from power.” —Winston S. Churchill1

A very conservative old friend sent his daughter to a prestigious prep school in New Hampshire. In freshman orientation, incoming students were asked to describe their politics. “I’m a monarchist,” proclaimed his devoted daughter. “There were congrats and high fives all round,” she told him later. “They thought I’d said I was a Marxist.”

In an age of lampooning anything which smacks of tradition, the question arises: what good is monarchy? It comes up frequently nowadays, given the behavior of certain royal personages. It’s the 21st century, for heaven’s sake! Surely the elevation of one personage to reign over everybody else is an anachronism? Not so fast, said Winston Churchill. Are we sure the alternatives work better?….

These are the days when in other countries ignorant people are often disposed to imagine that progress consists in converting oneself from a monarchy into a republic. In this country we have known the blessings of limited monarchy. Great traditional and constitutional chains of events have come to make an arrangement, to make a situation, unwritten, which enables our affairs to proceed on what I believe is a superior level of smoothness and democratic progress.2

Forget tyrannical royal families like the Kims in North Korea. We’re taking about the ceremonial heads of constitutional monarchies. Is it superior? In ordinary times, in eras of peace and prosperity, there is a commonality of purpose, in both a constitutional monarchy and a republic. In fraught times amidst poisonous politics, monarchy may have serviceable attributes. Stop and think about it.

The Canadian commentator Mark Steyn was asked: “If you could change one thing in the U.S. Constitution, what would it be?” He went right to Article II: “I’d separate the President from the Head of State.”

Now that would be separation of powers with a cleaver, and of course it’s not going to happen. In Britain, however, Churchill saw reason for the idea. In his favorite phrase, monarchy separated “pomp from power”:

The joining together in a single person of the headship of the State and headship of the government, or any approach thereto, open or veiled, has always been odious in Great Britain. We have known how to preserve the old and glorious traditions of hereditary monarchy while slowly building up a parliamentary system which has hitherto met the needs of a growing people, and changing times.3

Churchill praised separating “what is permanent from what is temporary.” The common inheritance of a nation, he argued, is beyond dispute. Law, language, literature; the contributions of past generations to a cultural ethos—nobody argues about that. (Well, not in his day.) But what about “those matters which must necessarily be in dispute between classes and parties and factions”? The unwritten British Constitution, Churchill said,

places the supreme position in the State beyond the reach of private ambition, but…assures to a political leader, in fullfilment of the wishes of the electors, a freedom and confidence of action unsurpassed in any land. Above all, we have that separation of pomp from power, which is perhaps one of the most important practical principles in the organization of a political system.4

Churchill explained that “if the King does what is thought to be wrong, it is his bad advisers who are blamed. But to apply that doctrine to the controversial head of a political government would be an altogether undue extension of the principle.”5  Years later, when Elizabeth II was crowned, he reiterated the concept, expanding it to the entire Commonwealth:

Bad advisers can be changed as often as the people like to use their rights for that purpose. A great battle is won: crowds cheer the Queen…. Here today we salute fifty or sixty parliaments and one Crown. It is natural for Parliaments to talk and for the Crown to shine. The oldest here will confirm me that we are never likely to run short of Members and of Ministers who can talk.6

There is utility in a system where Parliaments talk and the Crown reigns. When the Sovereign opens anything, from Parliament to a shopping mall, crowds cheer and the Sovereign is duly unifying. (No monarchs walk on stage clapping their hands, as politicians often do in other places.) It’s inappropriate in a constitutional monarchy. In 1940 Churchill said:

When our beloved Sovereign and the Queen come from their battered palace to a building which is not without evidence of the strokes of war, when the Sovereign comes to open Parliament in person and all his faithful Commons to the discharge of their duties, at every step, in every measure, in every formality, and in every resolution that we pass, we touch customs and traditions which go back far beyond the great Parliamentary conflicts of the 17th century; we feel the inspiration of old days, we feel the splendour of our political and moral inheritance.7

Constitutional monarchy, Churchill declared, was “a practical instrument and means of national self-preservation against every type of republic and every degree of dictatorship.” Hardly anyone, he added, “even the greatest simpleton,” believed any better system was available. “No one can presume to set himself up as national representative against the hereditary rights of the King.”8

It would be a mistake, he wrote, for Britain to force her system on other countries. It “would only create prejudice and opposition.”9 Still he believed it would have been better on the whole if some countries had kept their monarchs. He offered as examples Kaiser Wilhelm and Czar Nicholas before the First World War:

It is too much, as we see from the Willy-Nicky correspondence, for one human being to unite in himself a great measure of executive power with the pomp of sovereignty. No one can be trusted to stand it, and no one ought to have it. With us the Sovereign reigns but does not govern. All the splendour and tradition of the realm belong to the Crown; but the difficult, doubtful, disputable, day-to-day business is transacted by plain men in black coats who can be turned out and replaced if they do not give satisfaction….

The unfortunate Tsar was endeavouring to create within the brief span of his own life a parliamentary system in Russia. Had he or had the Kaiser succeeded to their thrones under something like the British Constitution, and with the experienced political advisers at their side whom our constitutional system has always hitherto supplied, they might both be reigning peacefully at the present moment, and the world would have been spared the measureless calamities of the Great War and the still unmeasured calamities which may follow from it.10

“The cost of government is greater under republics”

I once asked a British Member of Parliament how big a staff he had, and was told he had three. More recently a Swedish MP, staggered at the battery of aides grouped around U.S. representatives at a Congressional hearing, let on that she had a staff of one. Are overstuffed staffs the product of republics? Not necessarily: the French Chamber doesn’t seem to have more staffers than the British Parliament. But Churchill maintained

that the cost of government is greater under republics than under monarchies, that there is more corruption, less freedom and less progress, both physical and intellectual. There are, of course, exceptions, and it would be wrong to generalize. Every nation is entitled to the form of government it chooses, and once the apparatus of monarchy has been overthrown in a country there are a few precedents for its restoration. The fact remains, however, that it has been the experience of many nations to have dwelt more happily, more safely, more prosperously and more progressively under a monarchy than either an oligarchy or a republic.11

Will the Monarchy survive?

In The Dream, his 1947 conversation with the ghost of his father, Churchill explained that the monarchy had even survived socialism:

The Socialists are quite in favour of the Monarchy, and make generous provisions for it…. Of course they have a few rebels, but the old Republicanism of Dilke and Labby [Labouchère] is dead as mutton. The Labour men and the trade unions look upon the Monarchy not only as a national but a nationalised institution. They even go to the parties at Buckingham Palace. Those who have very extreme principles wear sweaters.12

Neither Lord Randolph nor his son, of course, could have anticipated the trauma surrounding Princess Diana half a century later. Not to mention the subsidiary recent eruptions and narcissism of lesser royal progeny.

Even in Lord Randolph’s day, the monarchy was proving durable. In his History of the English-Speaking Peoples, published a decade after The Dream, Churchill reminded us. He was writing about the “withdrawal from the outward shows of public life” of Queen Victoria, after the death of her beloved Prince Albert:

There had once been restiveness against the Crown, and professed republicans had raised their voices. By the end of the [19th] century all this had died away. High devotion to her royal task, domestic virtues, evident sincerity of nature, a piercing and sometimes disconcerting truthfulness—all these qualities of the Queen’s had long impressed themselves upon the minds of her subjects. In the mass they could have no knowledge of how shrewd she was in political matters, nor of the wisdom she had accumulated in the course of her dealings with many Ministers and innumerable crises. But they justly caught a sense of a great presiding personage.13

God Save The Queen

Vernon Bogdanor’s “period of magical monarchy,” writes Kevin Theakston, “reached its apotheosis in Churchill’s eyes in the early years of Elizabeth II’s reign.” But that pinnacle, as Pimlott wrote, was

buttressed in ways that could not be sustained indefinitely. The final disappearance of Empire; the transformation of media deference into media intrusion; the passing of an age of respect for authority and tradition and deference to hierarchy—these have eroded the old props and demystified the monarchy, with the royal family also making its own contributions to the spectacle of “royal soap opera.” The “fairy tale” aspects of Churchill’s conception of the monarchy may have gone for good, but the case he made for the important and positive role it plays in a democratic constitutional order remains a strong one.14

Churchill was only 35 when he praised “the wisdom which places the supreme leadership of the State beyond the reach of private ambition.”15 As long as royals remember that they are ceremonial figures not national nannies, the monarchy will survive. That’s the job. If one doesn’t like it, one may drop out and live in quiet obscurity, as many have before.

The British monarchy, Churchill continued, “has no interests divergent from those of the British people.”16 That is a principle Her Majesty The Queen has splendidly maintained through all the trauma and heartbreak, the highs and lows of her long reign. Ever since as a girl of 21 she promised that “my whole life whether it be long or short shall be devoted to your service.” She has certainly done so. Our grief over the loss of her beloved consort demonstrates that we know it, too.

The author is Winston S. Churchill unless otherwise noted.