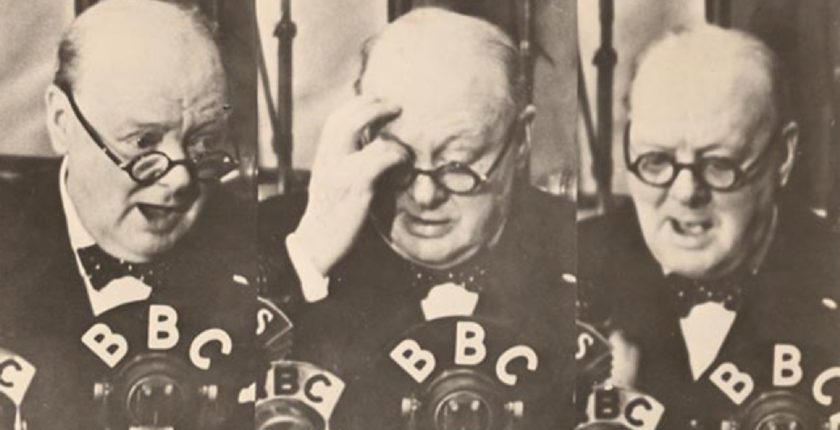 What are the best sources dealing specifically with Churchill’s art of speechmaking? I’m currently reading Sir Martin Gilbert’s Churchill: The Power of Words, which is truly fascinating. I’m bookmarking all of his speeches that I like. When I finish that I have The Churchill Factor by Boris Johnson to read. I’ve been looking for a good book on his speaking style; do you know of anything worth reading? —H.B., via email

The place to start is Churchill’s unpublished 1897 essay, “The Scaffolding of Rhetoric,” which outlines his theories of good oratory, which he followed throughout his life. We have sent you the text by email (and will gladly email a copy to any reader who asks).

​On Boris Johnson’s book, be sure to read Andrew Roberts’ review.

Here are five books, two entirely on his oratory, the others containing erudite articles, which you can purchase online. We strongly recommend Manfred Weidhorn’s Churchill’s Rhetoric and Political Discourse. He is the dean of scholars on Churchill as a master of English. Also worth reading are Crosby Kemper’s “The Rhetoric of Civilization” in his collection of Kemper Lectures; and Patrick Powers’ “Rhetorical Statesmanship” and Dr. Larry Arnn’s “True Politics and Strategy” in Churchill’s “Iron Curtain” Speech.

Manfred Weidhorn, Churchill’s Rhetoric and Political Discourse. Lanham, Md.: University Press of America, 1987, 136 pp. Produced by the White-Burkett Miller Center for Public Affairs, University of Virginia, this is an erudite guide to Churchill’s use of language in his persuasive oratory.

R. Crosby Kemper III, “The Rhetoric of Civilization,” in Crosby Kemper, ed., Winston Churchill: Resolution, Defiance, Magnanimity, Good Will. Columbia, Mo.: University of Missouri Press, 1996, 244 pp. This book is a fine collection of Kemper Lectures at Westminster College, Fulton, Missouri, wth a foreword by the editor that is along worth its place in the scholarship.

Patrick J.C. Powers, “Rhetorical Statesmanship,” in James W. Muller, ed., Churchill’s “Iron Curtain” Speech: Fifty Years Later. Columbia, Mo.: University of Missouri Press, 1999, 180 pp. These papers are from a colloquium at Fulton on the 50th Anniversary of Churchill’s “Iron Curtain” speech, which forms the first section of the book. At the end is a 50-year perspective by Lady Thatcher. In the middle are papers by historians analyzing aspects of the original, including Dr. Larry Arnn’s essay, “True Politics and Strategy.”

Sir Norman Birkett, “Churchill the Orator,” in Charles Eade, ed., Churchill: by his Contemporaries. London: Hutchinson, 1953, 528 pp. Though inevitably uneven, this is a remarkable compendium of contemporary comments pro and con by friends, enemies, rivals, and family on every aspect of Churchill’s character and career. Balanced and comprehensive: an essential text.

Featured Image: Before the microphones (BBC, Library of Congress).