The Churchill Project - Hillsdale College > Articles > Explore > Churchill in WWI > Armistice Day: Centenary of the End of the Great War 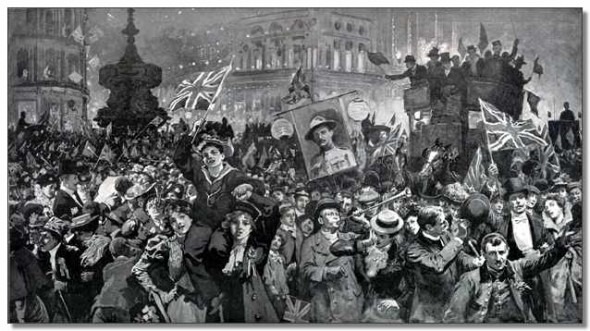 Above: End of the war in London. A group of Americans, somewhat uncertainly displaying flags, is cheered by the passing revelers. “Once a lot of Canadians came in sight, and some of them broke from their fellows, and came over and asked the Americans for the flags, which were promptly given them,” — Evangeline Holland, “A Glimpse of Armistice Day in London, 1918 (Edwardianpromenade.com)
Winston Churchill’s remembrances of Armistice Day are taken from The World Crisis, vol. 3, 1916-1918, part 2. (Some paragraphing has been added for ease of reading online.) Churchill’s knowledge of war and appreciation of its terrors permeates his writing. This memory of November 1918 is one of his finest passages, heavy with foreboding over what might follow. Which, alas, it did.

End of the War to End Wars

It was a few minutes before the eleventh hour of the eleventh day of the eleventh month. I stood at the window of my room looking up Northumberland Avenue towards Trafalgar Square, waiting for Big Ben to tell that the War was over.

My mind strayed back across the scarring years to the scene and emotions of the night at the Admiralty when I listened for these same chimes in order to give the signal of war against Germany to our Fleets and squadrons across the world. And now all was over! The unarmed and untrained island nation, who with no defence but its Navy had faced unquestioningly the strongest manifestation of military power in human record, had completed its task.

The Hour of Armistice

Our country had emerged from the ordeal alive and safe, its vast possessions intact, its war effort still waxing, its institutions unshaken, its people and Empire united as never before. Victory had come after all the hazards and heart-breaks in an absolute and unlimited form. All the Kings and Emperors with whom we had warred were in flight or exile. All their Armies and Fleets were destroyed or subdued. In this Britain had borne a notable part, and done her best from first to last.

The minutes passed. I was conscious of reaction rather than elation. The material purposes on which one’s work had been centred, every process of thought on which one had lived, crumbled into nothing. The whole vast business of supply, the growing outputs, the careful hoards, the secret future plans—but yesterday the whole duty of life —all at a stroke vanished like a nightmare dream, leaving a void behind.

My mind mechanically persisted in exploring the problems of demobilization. What was to happen to our three million Munition workers? What would they make now? How would the roaring factories be converted? How in fact are swords beaten into plough-shares? And how long would it take to bring the Armies home? What would they do when they got home? We had of course a demobilization plan for the Ministry of Munitions. It had been carefully worked out, but it had played no part in our thoughts. Now it must be put into operation. The levers must be pulled—Full Steam Astern. The Munitions Council must meet without delay.

And then suddenly the first stroke of the chime. I looked again at the broad street beneath me. It was deserted. From the portals of one of the large hotels absorbed by Government Departments darted the slight figure of a girl clerk, distractedly gesticulating while another stroke resounded. Then from all sides men and women came scurrying into the street. Streams of people poured out of all the buildings. The bells of London began to clash. Northumberland Avenue was now crowded with people in hundreds, nay, thousands, rushing hither and thither in a frantic manner, shouting and screaming with joy.

I could see that Trafalgar Square was already swarming. Around me in our very headquarters, in the Hotel Metropole, disorder had broken out. Doors banged. Feet clattered down corridors. Everyone rose from the desk and cast aside pen and paper. All bounds were broken. The tumult grew. It grew like a gale, but from all sides simultaneously. The street was now a seething mass of humanity. Flags appeared as if by magic. Streams of men and women flowed from the Embankment. They mingled with torrents pouring down the Strand on their way to acclaim the King.

Peace and Freedom, for Now…

Almost before the last stroke of the clock had died away, the strict, war-straitened, regulated streets of London had become a triumphant pandemonium. At any rate it was clear that no more work would be done that day. Yes, the chains which had held the world were broken. Links of imperative need, links of discipline, links of brute force, links of self-sacrifice, links of terror, links of honour which had held our nation, nay, the greater part of man kind, to grinding toil, to a compulsive cause—every one had snapped upon a few strokes of the clock.

My wife arrived, and we decided to go and offer our congratulations to the Prime Minister, on whom the central impact of the home struggle had fallen, in his hour of recompense. But no sooner had we entered our car than twenty people mounted upon it, and in the midst of a wildly cheering multitude we were impelled slowly forward through Whitehall. … It was with feelings which do not lend themselves to words that I heard the cheers of the brave people who had borne so much and given all, who had never wavered, who had never lost faith in their country or its destiny, and who could be indulgent to the faults of their servants when the hour of deliverance had come.

It will certainly not fall to this generation to pronounce the final verdict upon the Great War. The German people are worthy of better explanations than the shallow tale that they were undermined by enemy propaganda. If the propaganda was effective, it was because it awoke an echo in German hearts, and stirred misgivings which from the beginning had dwelt there. Thus when four years of blockade and battle against superior numbers and resources had sapped the vitality of the German people, the rebellious whispers of conscience became the proclaimed opinion of millions.

Yet in the sphere of force, human records contain no manifestation like the eruption of the German volcano. For four years Germany fought and defied the five continents of the world by land and sea and air. The German Armies upheld her tottering confederates, intervened in every theatre with success, stood everywhere on conquered territory, and inflicted on their enemies more than twice the bloodshed they suffered themselves.

To break their strength and science and curb their fury, it was necessary to bring all the greatest nations of mankind into the field against them. Overwhelming populations, unlimited resources, measureless sacrifice, the sea blockade, could not prevail for fifty months. Small states were trampled down in the struggle; a mighty Empire was battered into unrecognizable fragments; and nearly twenty million men perished or shed their blood before the sword was wrested from that terrible hand. Surely, Germans, for history it is enough!

Is This the End?

The curtain falls upon the long front in France and Flanders. The soothing hands of time and nature, the swift repair of peaceful industry, have already almost effaced the crater fields and the battle lines which in a broad belt from the Vosges to the sea lately blackened the smiling fields of France. The ruins are rebuilt. The riven trees are replaced by new plantations. Only the cemeteries, the monuments and stunted steeples, with here and there a mouldering trench or huge mine-crater lake, assail the traveller with the fact that twenty-five millions of soldiers fought here and twelve millions shed their blood or perished in the greatest of all human contentions less than ten years ago.

Merciful oblivion draws its veils; the crippled limp away; the mourners fall back into the sad twilight of memory. New youth is here to claim its rights, and the perennial stream flows forward even in the battle zone, as if the tale were all a dream.

Is this the end? Is it to be merely a chapter in a cruel and senseless story? Will a new generation in their turn be immolated to square the black accounts of Teuton and Gaul? Will our children bleed and gasp again in devastated lands? or will there spring from the very fires of conflict that reconciliation of the three giant combatants, which would unite their genius and secure to each in safety and freedom a share in rebuilding the glory of Europe?