Savrola: Churchill’s Novel, and Its Most Beautiful Appearance 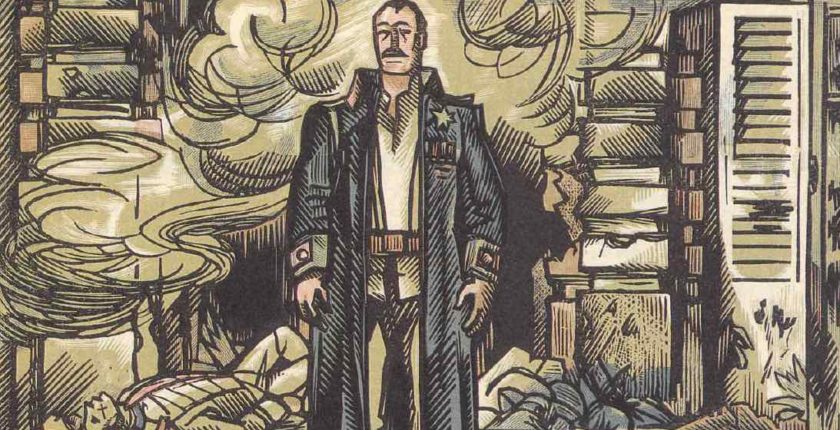 “Molara advanced until he had descended half way; then he paused. ‘Here I am,’ he said. The crowd stared. For a moment he stood there in the bright sunlight. His dark blue uniform-coat, on which the Star of Laurania and many orders and decorations of foreign countries glittered, was open, showing his white shirt beneath it. He was bare-headed and drew himself up to his full height. For a moment there was silence.” — Savrola (Illustration by André Collot for the 1950 Monaco Edition)

Churchill’s only novel is often dismissed as a “Ruritanian romance” of the Anthony Hope genre. Although it was his third published book, it was the first he started, spun off in an idealistic moment. Many reviewers saw it as forgettable—had the author not been who he was. But the scholar Patrick Powers has argued that Savrola is Churchill’s “premier literary effort, [giving] dramatic voice to Churchill’s mature philosophical reflections about his fundamental political and ethical principles at the very moment when he settled on them for the rest of his life. At minimum, it ought to be recognized as Churchill’s first substantial literary composition.” Churchill himself wrote in My Early Life that he had “consistently urged friends to abstain from reading it.” But the historian A. L. Rowse, reviewing the 1956 edition, wrote that despite Sir Winston’s modesty about it, Savrola “holds one’s attention for its own sake.” And Robert Rhodes James called at “a greatly neglected self-portrait.”

Savrola is set in a mythical Mediterranean republic whose unscrupulous President Molara is becoming a despot. Savrola, a popular reform leader, resists Molara’s brutal repressions. He hopes to put things right by constitutional means, but with force if necessary. Savrola’s rival is a man named Karl who believes “in the equality of incomes.” This is a clear reference to Marxism, which Churchill would oppose all his life. Ultimately Savrola is vindicated, returning from exile to lead his city-state back to peace and prosperity.

Many students of his canon consider that the hero is Churchill as he liked to imagine himself then. An appreciator of beauty and fine living, Savrola cannot live “in dreamy quiet and philosophic calm in some beautiful garden, far from the noise of men” while the life of the nation is at stake. “‘Vehement, high and daring,’ was his cast of mind. The life he lived was the only one he could ever live; he must go on to the end.” Forty years later the novelist would exhort his countrymen: “We shall go on to the end….We shall never surrender.”

Whether one finds Savrola a key to Churchill’s philosophy, morality and constitutionalism, or just a yarn, Savrola will be of interest—now to the new generations through electronic as well as print editions. — Richard M. Langworth, A Connoisseur’s Guide to the Books of Sir Winston Churchill.

The Finest Savrola of All • by Antoine Capet

“This magnificent edition is overlooked by many collectors because it is not in English,” continues the Connoisseur’s Guide. Indeed it is to be wondered how many Churchill admirers are even familiar with the 1950 French Savrola, produced in Monaco by a small, high-quality publisher, “À la Voile Latine” (“At the Sign of the Lateen Sail”). The company seems to have been active between 1945 and 1952, judging by its volumes on the antiquarian book market.

A brief history of the French language Savrola: The work first appeared in three parts in the February-April 1948 issues of France Illustration Littéraire et Théâtrale. These were illustrated by Lucien Boucher, a well-established French artist. The text was condensed, however, so does not constitute the first complete French appearance. But it was a compliment to Churchill, since few of his early books were serialized, let alone illustrated, in languages other than in English.

Whereas the (poor) translator of the Mémoires was not named, the French translation of Savrola is credited to Judith Paley, whose name is English-sounding. She was probably a bilingual expatriate, but little is known of her. The Bibliothèque Nationale de France, our copyright library, otherwise mentions her name only in connection with a series of 1930-46 pamphlets on Anglophone authors like Aldous Huxley and Daphne du Maurier, and film figures such as Vivien Leigh and John Ford. All French editions use Paley’s translation, including the 2011 reissue by Éditions Écriture.

My paperback has a promotional band suggesting that few French knew of Churchill’s fiction: “A revelation! Churchill novelist.” It sold well: my copy announces “6e mille,” 6000 copies. (The average new novel sells about 500 in France today.) Whether buyers read it is another story. My copy is uncut, thus unread. Its relative success must have inspired À la Voile Latine to create the ultimate limited edition pictured below. They commissioned color drawings from a well-known illustrator, André Collot (1897-1976), who had made a name for himself before the war producing mildly erotic drawings for (at the time) risqué titles like Brantôme’s Vie des dames galantes or Tales from Boccaccio’s Decameron.

Specialty publishers in mid-20th century France often designed a deluxe edition of some well-known classic, or the work of a famous author. It would be finely printed in large type with wide margins on expensive rag paper, sometimes with “deckled” (rough untrimmed) edges. The size was usually “quarto” (29x22cm, about 11×9 inches). This required sheets of raisin format (65x50cm, similar to the old “Royal” format) folded into four, yielding untrimmed quires or signatures measuring about 13×10 inches. If the paper was hand-made, the pages were often left rough with deckled edges. If from machine-made paper, pages were trimmed by a bindery. The pages were unsewn—buyers would commission a binder of their choice after selecting cover material, endpapers and decoration, like tooling or page edge gilding.

À la Voile Latine followed this well-established pattern. Their limited edition was printed on 15 February 1950 on the Dumoulin Press, H. Barthélemy, Director. The engraving was by Jose Barbaré Bracons-Duplessis, who worked with Collot on other fine books. Elaborate protection was provided for the unbound pages. Wrapped in glassine, they were held in a loose chemise (wrapper) with the printed title on its spine. (Nothing was glued, of course.) The chemise, covered with good-quality paper, was housed in a slipcase with the same type of paper overlay. Thus all six sides of the volume were protected from exposure to dust, sunlight and humidity.

This beautiful Savrola offers many variants which delight the bibliophile. The total printing was 1000 copies, 950 of which were intended for commercial sale. Copies 1-50 were printed on vélin d’Arches pur chiffon à la forme (hand-made pure-rag wove paper from the Arches mill). Copy 1 was supplied with sketches and studies by the artist (quantity unstated), twelve original drawings, and a suite of black ink illustrations. Copies 2-13 came with two original designs and the suite of illustrations. Copies 14-50 included the suite of illustrations only.

Copies 51-950 were printed on papier pur fil des papeteries Lafuma (pure paper from the Lafuma mill), without the suites of illustrations. Fifty more copies, numbered HC 1 to HC 50, were hors commerce (not for sale), intended for the publisher, author, illustrator and associates. Bibliographer Ronald Cohen owns HC 6 and a bookseller has recently advertised HC 9. The location of copy 1 is alas unknown.

Two materials differing slightly in size were used for the chemise and slipcase. Most, including the special copies 1-50, were covered in pale grey-blue “laid” paper, a quality material with a finely ribbed appearance. The spine carries the title, author and illustrator in black type. A variant material resembled parchment, with red borders and red spine letters reading  “W.S. Churchill – Savrola.” The variant seems to be a late change, since my “parchment” copy is number 826 and my blue-grey copy is 166.

There is an extra dimension to the story of this fine work. André Collot apparently sent a copy to Churchill himself (probably one of the hors commerce variety). Churchill replied, referring to “my little novel of sixty [sic] years ago,” adding, “It is a pleasure to be able to sign the fly-leaf which you enclosed with your letter….” Later Collot bound at least two copies in padded tan pebble grain morocco, page edges gilt, titles gilt on spine and cover, with raised spine bands and a tan leatherette slipcase. After the title page, these copies contained a bound-in facsimile of Churchill’s 4 May 1951 letter of thanks, and Collot’s fine pen and ink sketch of WSC in his wide-brimmed Stetson hat.

Two such copies are known. In the first, copy 69, Collot signed the sketch in pencil and numbered the print “61/200.” This copy was sold in the 1990s to a collector in New England, where it remains. Happily, I was pleased recently to acquire a second example, number 596. It is identical to 69, except that the Collot sketch is neither signed nor numbered.

All this leaves the bibliophile with tantalizing questions. How many presentation copies with the facsimile letter and sketch of Churchill were commissioned? The machine-made slipcase is not the same quality as the binding, suggesting that several were produced. Second, while one would expect the “temporary” paper cover to have been retained in the best French binder’s tradition, said cover is missing on my bound copy. Third, were these special bindings commissioned by Collot or by À La Voile Latine, or both? Fourth, was number 69 the only copy to bear Collot’s signature and number on his sketch of Churchill?

Finally, what happened to the very special copy number 1, with its accompanying artist sketches? Could this have been Collot’s copy, for which Churchill had signed and returned the flyleaf? Or was it the copy Collot sent to Churchill, which WSC acknowledged in his letter of 4 May 1951, promising a place for it in his library? I checked with Sir Winston’s great-grandson, who neither possesses it nor remembers it. We do know that Sir Winston’s son Randolph inherited his father’s library and disposed of its contents over the years. Perhaps one day these priceless copies will resurface.

Antoine Capet, FRHistS, is Professor Emeritus of British Studies at University of Rouen, France, and author of a new reference work, Churchill: Le Dictionnaire. Our thanks to Ronald I. Cohen, author of the Bibliography of the Writings of Sir Winston Churchill, for his kind assistance in research.