Blood, Toil, Tears and Sweat: Origins of a Famous Phrase 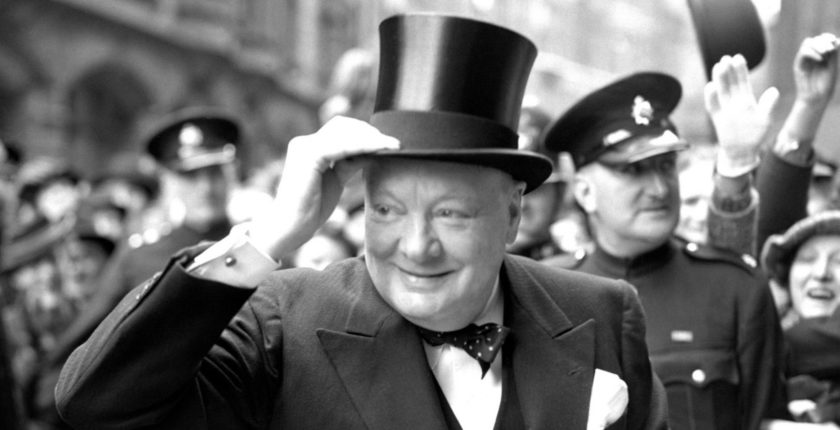 Featured Image: Even in victory, as after Alamein, Churchill reminded listeners of the blood, toil, tears and sweat they, and he, had expended.

Though he gave permanent life to blood, toil, tears and sweat, Churchill’s best-remembered words did not originate with him, and similar expressions date very far back. Quotations scholar Ralph Keyes writes:

Cicero and Livy wrote of  “sweat and blood.” A 1611 John Donne poem included the lines “That ‘tis in vaine to dew, or mollifie / It with thy Teares, or Sweat, or Bloud.” More than two centuries later, Byron wrote, “Year after year they voted cent per cent / Blood, sweat, and tear-wrung millions—why?—for rent!” In his 1888 play Smith, Scottish poet-playwright John Davidson wrote of “Blood – sweats and tears, and haggard, homeless lives.” By 1939, a Lady Tegart reported in a magazine article that Jewish communal colonies in Palestine were “built on a foundation of blood, sweat, and tears”….Since this phrase was obviously familiar when Churchill gave his memorable speech the following year, even though he rearranged the words and added “toil” for good measure, our ears and our memory quickly returned them to the more familiar form.1

Churchill’s use of the term started four decades before 1940, in the Boer War. In 1899, during his imprisonment in Pretoria, he had a conversation with Mr. Grobelaar, the Boer Under-Secretary for Foreign Affairs. (Churchill was “In Durance Vile” for taking part in the famous rescue of the armoured train, though he was theoretically a war correspondent.) Churchill told Grobelaar that Britain would win the war, but granted that “the necessity for settling the matter has become more apparent. As for the result, that, as I think Mr. Grobelaar knows, is only a question of time and money expressed in terms of blood and tears.”2

A year later Churchill used the phrase again in an article entitled, “Officers and Gentlemen”:

As we have frequent little local manoeuvres, so there must be greater ones, all carefully supervised, at longer intervals. And the knowledge gained at every manoeuvre must be used remorselessly to control the progress of mediocre men up the military ladder; to cast the bad ones down and help the good ones towards the top. It will all seem very sad and brutal in times of peace, but there will be less blood and tears when the next war comes.3

The phrase must have stuck in Churchill’s photographic memory, because thirty years later, in his final volume of The World Crisis, he regarded with a shudder the demise of the Hohenzollern, Hapsburg and Romanov empires—a precursor, though he could not know it then, of the Second World War to come:

In the Parliaments of the Hapsburgs bands of excited deputies sat and howled at each other by the hour in rival languages, accompanying their choruses with the ceaseless slamming of desks which eventually by a sudden crescendo swelled into a cannonade. All gave rein to hatred; and all have paid for its indulgence with blood and tears.4

“Toil,” a favorite word of Churchill’s, was in the mix as early as 1932. Leaving New York after a lecture tour, he was asked by a radio interviewer whether “a war between two or more powers is about to take fire.” He responded with one of his few strikingly bad predictions:

I do not believe that we shall see another great war in our time. War today is bare—bare of profit and stripped of all its glamour. The old pomp and circumstance are gone. War now is nothing now but toil, blood, death, squalor and lying propaganda.5

“Blood and tears” (with “toil and sweat” temporarily deleted) next appeared in a 1939 Churchill article speculating on the likelihood of war:

Although the sufferings of the assaulted nations will be great in proportion as they have neglected their preparations, there is no reason to suppose that they will not emerge living and controlling from the conflict. With blood and tears they will bear forward faithfully and gloriously the ark which enshrines the title deeds of the good commonwealth of mankind.6

An allied expression came in an article Churchill wrote during late stages of the Spanish Civil War, reprinted in his 1939 collection of articles, Step by Step:

Surely this is the supreme question which should engage the thoughts of mankind. Compared with it all other human interests are petty and other topics trivial. Nearly all the countries and most of the people in every country desire above all things to prevent war. And no wonder, since except for a few handfuls of ferocious romanticists, or sordid would-be profiteers, war spells nothing but toil, waste, sorrow and torment to the vast mass of ordinary folk in every land. Why should this horror, which they dread and loathe, be forced upon them? How is it that they have not got the sense and the manhood to stop it?7

Churchill added “sweat” in 1931, in the last volume of The World Crisis, as he described the devastating battles between the Russians and the Central Powers. His pages, he said, “record the toils, perils, sufferings and passions of millions of men. Their sweat, their tears, their blood bedewed the endless plain.”8 Another piece on war in Spain carried the expanded phrase eight years later:

But at length regular armies come into the field. Discipline and organisation grip in earnest both sides. They march, manoeuvre, advance, retreat, with all the valour common to the leading races of mankind. But here are new structures of national life erected upon blood, sweat and tears, which are not dissimilar and therefore capable of being united. What milestone of advantage can be gained by going farther? Now is the time to stop.9

Finally, and when it counted most, on 13 May 1940, all four famous words came together in Churchill’s inspiring first speech as Prime Minister: “I have nothing to offer but blood, toil, tears and sweat.” Clearly he had considered and arranged the words for maximum impact. His postwar recording of the speech comes down very hard on the“sweat.”10 The response to those words was electric and gratifying, though Churchill was had mixed thoughts about it: “One would think one had brought some great benefit to them, instead of the blood and tears, the toil and sweat, which is all I have ever promised.”11

An indefatigable reviser, like most good writers, Churchill created an addendum to his famous phrase a year after he first used it, at a particularly grim time in the war. Rommel was rebounding in North Africa, Nazi submarines were taking a deadly toll on the Atlantic, the Blitz continued, and Britain was still alone. Churchill recognized the perils, but ended on a high note:

I ask you to witness, Mr. Speaker, that I have never promised anything or offered anything but blood, tears, toil, and sweat, to which I will now add our fair share of mistakes, shortcomings and disappointments….When I look back on the perils which have been overcome, upon the great mountain waves through which the gallant ship has driven, when I remember all that has gone wrong, and remember also all that has gone right, I feel sure we have no need to fear the tempest. Let it roar, and let it rage. We shall come through.12

A more hopeful evaluation of the cost of the war to date was offered just before the attack on Pearl Harbor and America’s entry into the war:

I promised eighteen months ago “blood, tears, toil and sweat.” There has not yet been, thank God, so much blood as was expected. There have not been so many tears. But here we have another instalment of toil and sweat, of inconvenience and self-denial, which I am sure will be accepted with cheerful and proud alacrity by all parties and all classes in the British nation.13

Votes of no confidence

Although Russia and America had joined Britain in the battle by the end of 1941, the situation was bleaker than ever when Churchill called for a vote of confidence in January 1942. He handily won, 464 to one. Winding up for the Government, he reminded the House that nothing had changed: “I stand by my original programme, blood, toil, tears and sweat, which is all I have ever offered, to which I added, five months later, many shortcomings, mistakes and disappointments.”14

A more contentious vote of no confidence was faced down in July. After Tobruk had fallen to Rommel, dissident MPs tabled a motion: “That this House, while paying tribute to the heroism and endurance of the Armed Forces of the Crown in circumstances of exceptional difficulty, has no confidence in the central direction of the war.” Churchill defeated that one, too, 475 to 25, falling back on his old prescription and giving it a new twist:

I have not made any arrogant, confident, boasting predictions at all. On the contrary, I have struck hard to my “blood, toil, tears and sweat,” to which I have added muddle and mismanagement, and that, to some extent, I must admit, is what you have got out of it.15

Finally in the autumn of 1942, the victory at Alamein turned the tide of the war for Britain. It marked, wrote Churchill, “the turning of ‘the Hinge of Fate.’ It may almost be said, ‘Before Alamein we never had a victory. After Alamein we never had a defeat.’”16 Doubtless he felt it right to reiterate the original phraseology:

I have never promised anything but blood, tears, toil and sweat. Now, however, we have a new experience. We have victory—a remarkable and definite victory. The bright gleam has caught the helmets of our soldiers, and warmed and cheered all our hearts.17

Despite all of Churchill’s many iterations and elaborations on it, the best-remembered version remained “Blood, Sweat and Tears.” In 1941, when publishing Churchill’s first volume of war speeches, both Putnam in New York and McClelland & Stewart in Toronto chose Blood, Sweat and Tears instead of the English title, Into Battle. And when modern politicians voice his words, they usually leave out “toil,” too.

5 Martin Gilbert, Winston Churchill: The Wilderness Years (Boston: Houghton Mifflin, 1982), 45. From a radio interview in Boston on 10 March 1932. It is most unlikely that he would have made the same prediction a few months later: by May 1932 the National Socialists had become the largest single party in Germany.