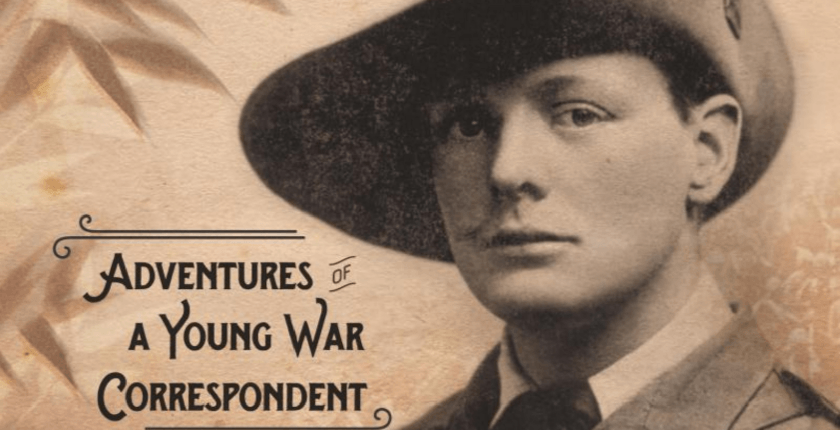 Veteran journalist Simon Read considers Churchill’s early career as a soldier and war correspondent a “true tale of adventure…Churchill as Indiana Jones” (ix). Young Winston’s experiences, Read says, enabled him to escape his father’s shadow, to earn repute, and to be judged by his accomplishments. They also informed Churchill’s complex views on warfare, and equipped him for the rough and tumble of parliamentary life. It was the crucible of his remarkable moral vision and courage in the great wars of the 20th century.

Read covers well-trod ground. Churchill himself began the telling with his first four war books and his autobiography, My Early Life. Frederick Woods published Churchill’s early war dispatches (Young Winston’s Wars, 1972; later Winston Churchill War Correspondent) but with little narrative or analysis. Randolph Churchill’s first volume of the official biography covered the period along with relevant documents. Con Coughlin looked at the Malakand experience in Churchill’s First War (2013, cited heavily by Read), while Chris Schoeman (not cited) wrote about the South African sojourn, and Hal Klepak has just brought out a book on Churchill in Cuba.

Read’s book shares qualities with John Kelly’s Never Surrender: It is a well-written and organized account of events familiar to many, nicely equipped with maps and photographs. Thus it is ideal for young people or others unfamiliar with the minutiae of Churchill’s early life, aiming to convey those exciting years to the general reading public. Hopefully it will inspire readers new to Churchill to turn to more detailed works like the official biography or the above specialized studies.

A sometimes indifferent student, young Winston excelled at riding, shooting and fencing. No sooner had he graduated from the Royal Military College at Sandhurst in 1895 than he and a fellow officer went to Cuba as observers with the Spanish army fighting the Cuban insurrection. Read covers the familiar path: Churchill is entertained in New York by his early mentor, Congressman Bourke Cockran; has his first taste of hostile gunfire the day after his 21st birthday; produces five dispatches for London’s Daily Graphic; and develops two lifetime habits, cigars and siestas.

Next Churchill is attached as an officer and a reporter to Sir Bindon Blood’s expedition on India’s North West Frontier, today’s border area between Afghanistan and Pakistan, to face down recalcitrant Islamic tribesmen—the same targets of American drone strikes over a century later. If Cuba was a subtle taste of war, this was a feast, with brutal, guerrilla-style fighting amidst miserable conditions. Churchill writes for the London Daily Telegraph and the Allahabad Pioneer Mail; his dispatches form the basis for his first book, The Story of the Malakand Field Force (1898). He also acquires another lifetime practice: whisky becomes his “drink of choice.”

In the Sudan in 1898, Churchill attaches himself to the forces of Lord Kitchener, sent to depose the Dervishes, another Islamic foe. A man of fierce reputation and scant humor, Kitchener had disdained Churchill’s first book and views the author as a publicity hound. Pressure from high places, including the Prince of Wales and prime minister, forces his hand. Churchill is attached to the 21st Lancers and, at Omdurman, takes part in the last significant British cavalry charge. He also writes for The Morning Post, surreptitiously at first, earning £15 pounds per dispatch. In his subsequent successful book, The River War (1899), he is highly critical of Kitchener for destroying a Muslim holy site, executing prisoners, and refusing to bury the enemy dead.

Churchill’s fourth war was in South Africa, where the Boer (Dutch) settlers had resisted British rule and had finally invaded British territory in late 1899. Now resigned from the army, young Winston covers the war for The Morning Post, at a lucrative £1000 for the first four months. The Boers prove a tough foe and Churchill is captured, spending his 25th birthday imprisoned in Pretoria, the Boer capital. He makes a daring escape, winning international acclaim, and returns to fight as an officer in the South African Light Horse, while still reporting. After several battles, he helps liberate the prison he escaped from. His new fame and his Boer War books, London to Ladysmith via Pretoria and Ian’s Hamilton March, along with his novel Savrola, propel him to financial success, election to Parliament and a North American speaking tour.

Read includes a useful bibliography of Churchill’s published war dispatches, otherwise accessible only in Ronald Cohen’s magnificent but expensive  Bibliography of the Writings of Sir Winston Churchill. There are a couple problems though: Charles Gordon’s death is misdated 1888 instead of 1885 (94); going south on the Nile is not a “journey downriver” (100). Read refers to Charles Burnham, who aided Churchill’s South Africa escape, as a “local Dutchman” (174), per Churchill’s cryptic reference in My Early Life. In the official biography, Randolph Churchill established that Burnham was an Englishman. The author should have provided more detail on Churchill’s finances, his disagreements with his mother about money and royalties, and various real or threatened litigations.