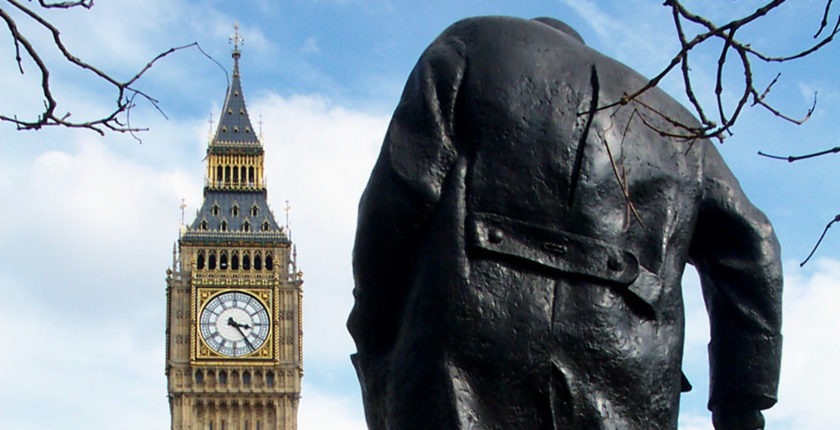 Why does the United States honor Winston Churchill on April 9? Why not, for example, May 10? That was the day in 1940 when, with liberty in retreat, he became Britain’s prime minister, sure that he knew a good deal about it all, certain he would not fail, impatient for the morning….

But April 9 has its own significance for Americans. That was the day, in 1963, when President Kennedy proclaimed Sir Winston an honorary citizen of the United States.

Churchill was too infirm to attend in person. But it is always worth recalling what he thought about it all, in a letter to the president, read by his son:

“In this century of storm and tragedy, I contemplate with high satisfaction the constant factor of the interwoven and upward progress of our peoples. Our comradeship and our brotherhood in war were unexampled. We stood together, and because of that fact the free world now stands.

“Nor has our partnership any exclusive nature: the Atlantic community is a dream that can well be fulfilled to the detriment of none and to the enduring benefit and honour of the great democracies.”

Of course Churchill believed that “nothing surpasses 1940.” Few would gainsay him. In 1940 he gave a country, outnumbered and outgunned, alone except for its Empire–Commonwealth, the courage to stand the “faithful guardians of truth and justice”—until “those who were hitherto half blind were half ready.”

That year proved likewise that one person can make a difference. As Charles Krauthammer observed: “Only Churchill carries that absolutely required criterion: indispensability. Without Churchill the world today would be unrecognizable—dark, impoverished, tortured.”

And so we won. Western civilization was saved. Yet it was not, William F. Buckley Jr. argued, “the significance of that victory, mighty and glorious though it was, that causes the name of Churchill to make the blood run a little faster….It is the roar that we hear, when we pronounce his name….

“It is simply mistaken that battles are necessarily more important than the words that summon men to arms, or who remember the call to arms. The battle of Agincourt was long forgotten as a geopolitical event, but the words of Henry V, with Shakespeare to recall them, are imperishable in the mind, even as which side won the battle of Gettysburg will dim from the memory of those who will never forget the words spoken about that battle by Abraham Lincoln….

“The genius of Churchill was his union of affinities of the heart and of the mind, the total fusion of animal and spiritual energy.”

Hillsdale College seeks to refract that energy with two unique teaching tools: Winston S. Churchill and The Churchill Documents, comprising the official biography, and the Churchill Papers of Sir Martin Gilbert, his biographer for 40 years.

As we produce each new document volume—this year reaching the eve of D-Day—we are struck by the sheer volume and variety of the subjects Churchill grappled with: enemies and allies; allocation of personnel and equipment between competing theaters of war; urgent pleading from statesmen and generals, often demanding the impossible; cabinet dialogue and argument; summit meetings; Parliamentary business; public communications; appointments; postwar planning—on and on for 2,500 pages.

Nowhere is there so thorough a record of one statesman’s decision-making; nowhere were the decisions so consequential. Even now, in the digital age, Churchill’s workload would tax several capable people. His output was extraordinary, his reasoning understandable, communications thoughtful, his scope global. And there was this rare quality: it was simply impossible for Winston Churchill to write a boring sentence.

Today, as in 1963, we study Churchill because he stood for something—the principle that “the people own the government, and not the government the people.” He exemplified certain critical human possibilities that are always worth bringing to the attention of thoughtful people. In 1943 he spoke at Harvard of our heritage:

“Law, language, literature—these are considerable factors. Common conceptions of what is right and decent, a marked regard for fair play, especially to the weak and poor, a stern sentiment of impartial justice, and above all the love of personal freedom, or as Kipling put it: ‘Leave to live by no man’s leave underneath the law’—these are common conceptions on both sides of the ocean among the English-speaking peoples.”