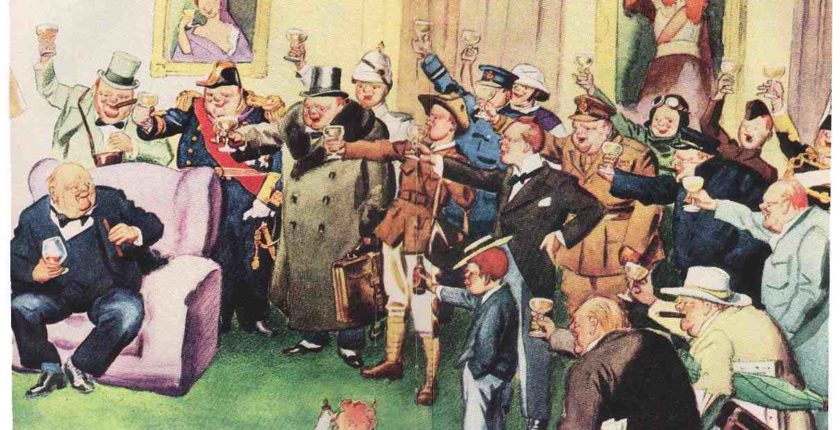 “To Winston, with affectionate greetings from his old castigator—Low.” (Illustrated, 1954, public domain) 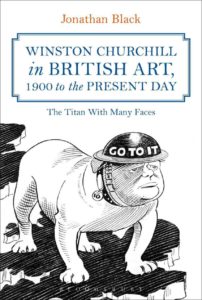 Black begins by asking why there should be yet another publication on Churchill (1). When one considers the amount of writing devoted to Sir Winston, it seems amazing that any aspect escaped chronicling.

Black claims to be the first “to take a close and searching look at how Churchill has been presented.” He was a titan “of many moods and many faces: stern, commanding, obstinate, sulky, petulant, confident, amused, beguiling and eminently appealing” (1; 10).

Black’s thesis is intriguing, but his book, while chronicling some interesting art anecdotes, lacks overall cohesion and unity. The transitions between the array of paintings, sculptures and political cartoons are abrupt and unorganized, often leaving one with a string of individual accounts, rather than a unified survey of the works. And while the book provides numerous photographs of the artwork in discussion – including twelve color plates – the illustrations occasionally interrupt the text mid-sentence. All in all, the book could have used a good editor to help unify these transitions and smooth out the smattering of grammatical errors, typos, and clunky phrases that plague the text.

In spite of these aesthetic and organizational flaws, however, Black’s book offers an interesting perspective into Churchill’s multi-faceted personality. Most sculptors and painters who attempted Churchill’s image found the task the hardest of their careers. Churchill was utterly unable to hold still, but even more formidable was the complexity of his personality. As an aspiring artist myself, I can attest to their challenge. Capturing a true likeness requires not just detached physical resemblance, but also a glimpse or spark of a person’s character.

With Churchill, the artists’ challenge was to choose a particular aspect of his character to seize upon. Sculptor Clare Sheridan, whose works are included in the book, declared that one sitting with Churchill “could provide material for a dozen portraits.” The sculptor Oscar Nemon called Churchill “one of the most difficult subjects I ever had….The Prime Minister has many moods, all clearly defined because he is a man of such powerful character. And he will not surrender his personality to the artist…” (10; 140).

Black also provides glimpses of what Churchill himself thought of his image. For example, Churchill disliked the way the World War II “bulldog” image stuck to him long after the War. He believed it focused on just one element of his personality, excluding his gentler, more humorous side (140). His wife Clementine was also very conscious of the way artists presented her husband. She too disliked the way postwar artists tended to portray him as “ferocious,” which she saw as a misrepresentation of his character (106; 196). In 1956, Clementine went so far as to destroy a particularly detested portrait by Graham Sutherland, that she believed made Winston look like “a gross and cruel monster” (169).

In addition to the more formal artistic depictions, Black also discusses Churchill’s portrayal in political cartoons. Of the many cartoonists who drew and sketched the great man, Black gives the most attention to Sir David Low. Like a painter, Low illustrated many aspects of Churchill’s career and personality, more often than not negatively.

Low, an ardent socialist, drew largely for the pro-Labour Star. Churchill took no offense at Low’s lampooning. He liked Low’s works so much that he bought and framed one. The two nursed a genuine mutual attachment. When Churchill turned eighty, Low produced a memorable cartoon of the old man being congratulated by all the “Winstons” of his earlier years, signing it, “With affectionate birthday greetings from his old castigator.” Low declared that “Churchill is one of the few men I have met who even in the flesh gives me the impression of genius” (72).

In the end, Jonathan Black’s book does provide some interesting glimpses into Churchill’s life and personality in art, even if one has to wade through some disorganization to find said moments. It is a shame, though, that the book’s full potential remains unrealized; with some guidance and revision, it might have made as intriguing a narrative as the subject it set out to capture.

Katie Davenport is a senior at Hillsdale College studying Art and English. She is also one of Hillsdale’s Churchill Fellows, and has thoroughly enjoyed her experience as a research assistant for the college’s Churchill Project.