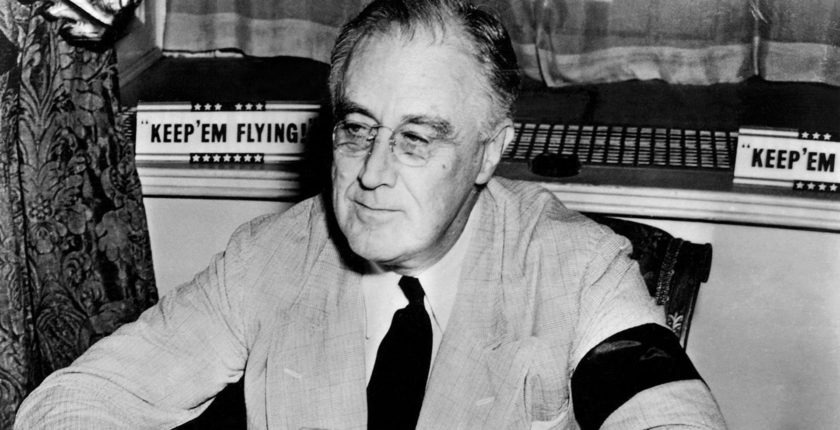 Nicholas Wapshott is a talented member of that tribe of British journalist-historians who have been successful with American audiences. His latest political biography takes Franklin D. Roosevelt over familiar ground, the path to participation in the war against Hitler’s Germany. It’s a good, entertaining read that serves as a quite nice refresher course in what Walter Johnson decades ago called The Battle Against Isolation (1973).

Why is a book about Roosevelt, especially focused on what Americans saw as the “prewar era,” important to the Churchill Project? True, Churchill was not a connected government official for much of the time covered by this book. But when he does appear, it is as a minor player. Really? The origins of the Churchill-Roosevelt relationship, one of the essentials in the high politics of the Second World War, seem incidental, even though both men sought out contact with each other. Wapshott’s inference is that Churchill was a lesser, even minor player in the politics of World War II. Really? Why the inaccurate distinction? Because that fits Wapshott’s interpretation that FDR was the genius who led the Americans into the war. Really? The United States got there, but not until two years and four months after it began in September 1939, and then only after Britain, led by Churchill and supported only by the Empire, had forced the Germans to drop plans to invade Britain. Winston Churchill was never Roosevelt’s Sancho Panza.

Wapshott can turn a phrase. In 1938, he writes, Hitler “won the air war over Europe without a shot being fired,” largely through an “unwitting agent,” Charles Lindbergh (89). A public hero for his famous solo flight across the Atlantic, Lindbergh consistently endorsed German false propaganda about their superior air strength; which reveals Wapshott’s somewhat contrived framework. Isolationism is defined not by Wapshott, but by the words and machinations of Joseph Kennedy (Roosevelt’s ambassador to Great Britain) and Lindbergh. That device tends to morph the contest between so-called isolationists and the Roosevelt administration into one between individuals. Other players are mentioned, but the policy dispute we see here is mano a mano, Hollywood style. That makes for good fun, as Roosevelt and Kennedy (an Irish-American deeply suspicious of the English) trade insults—FDR through third parties, Kennedy through a retrospective memoir. Kennedy’s personal ambition to succeed Roosevelt traps him in the president’s cleverly constructed web. Once FDR runs for a third term, the party is over. But this is a story told before, and in detail.

Similarly for Lindbergh. Both he and Kennedy adamantly opposed getting involved in the war they feared was coming. But Lindbergh, privately (for the most part) anti-Jewish and unduly impressed by German air power, empathized with Nazism, whatever his mild discomfort with the Nazis’ use of violence as discipline. Again, this is an oft-told, fully documented tale. Nothing new here. Isolationism was far different, far more complex than the pathetic anti-Semitism of Lindbergh or the thwarted ambitions of the one-time rum-runner, although all that makes for a good story.

Despite a passel of endnotes and an extensive bibliography, this is not a useful book to history or historians. Important standard monographs and documentary collections are missing from the list. There are odd omissions of important explanatory events. The Ogdensburg Agreement with Mackenzie King, a plan for U.S.-Canadian mutual defense overseas, goes unmentioned. The entire story of FDR’s abiding concern about control of the British fleet in the event of a successful German invasion of Britain is casually dismissed in a couple of sentences—despite the fact that it delayed the destroyers-for-bases deal between America and Britain at a time when every minute counted. There is no mention of Tyler Kent, a U.S. diplomat who stole documents for a pro-German organization while working as a cipher clerk at the U.S. embassy in London—which seemed to threaten the Churchill-Roosevelt relationship even before it really got started. A loyal ex-patriate Briton, Wapshott accuses the Americans of a rip-off by demanding the transfer of British gold from South Africa, not mentioning (or knowing?) that the idea was British, despite Churchill’s protestations. The critical implications of growing Japanese-American tensions are assumed, not discussed.

Conrad Black, sometime biographer of FDR, wrote a dust-jacket blurb calling The Sphinx “brilliant, rigorous, and gripping.” Wapshott echoes and routinely cites Black’s nuanced image of Roosevelt (no truly new evidence offered by either) as an effective and thoughtful mastermind, who, bypassing Congress and the law, planned and carried out a wonderful, world-saving scheme to involve the United States in stopping Hitler—with Churchill as much a problem as an asset. A dubious argument.

A cautionary note for the new generation of historians: Websites increasingly displace archival research, and Wapshott seems not to have gone to the American or other archives. That’s really an omission. Rummaging through file folders develops historical context and sensitivity that is different from scrolling a monitor screen, and is often indispensable.

Warren F. Kimball, Robert Treat Professor (emeritus) at Rutgers University, is author of Forged in War, The Juggler, edited with commentary the Churchill-Roosevelt correspondence. He has written extensively Churchill, Roosevelt and the Second World War. His institutional history of the U.S. Tennis Association is published in 2017. This review is extensively revised from an appearance in The Historian, March 2017. See also herein Churchill and the Presidents: Franklin Roosevelt.