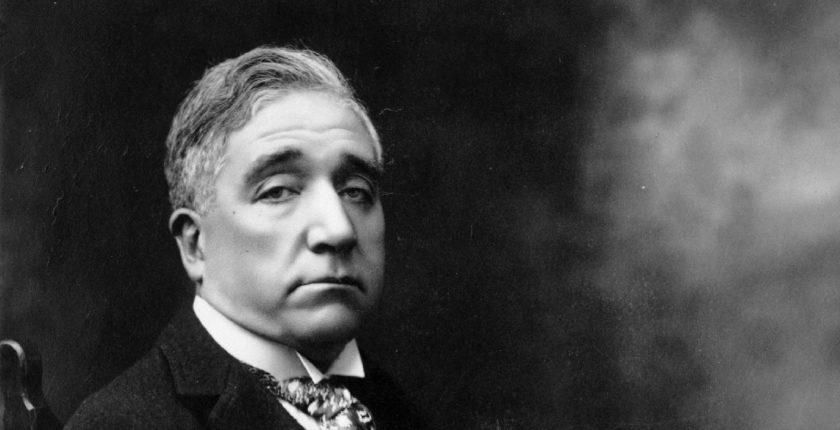 On 5 March 1946 at Westminster College in Fulton, Missouri, Winston Churchill gave a signal address, The Sinews of Peace, popularly known as the “Iron Curtain” speech. “I have often used words,” he said, “which I learned fifty years ago from a great Irish-American orator, a friend of mine, Mr. Bourke Cockran: ‘There is enough for all. The earth is a generous mother; she will provide in plentiful abundance food for all her children if they will but cultivate her soil in justice and in peace.’” Only a few years earlier, Churchill had co-opted Cockran’s words, adding “in majesty,” in his first speech to the United States Congress.1

Churchill’s acquaintance with the American congressman Bourke Cockran stemmed from Cockran’s friendship with Winston’s mother Jennie, Lady Randolph Churchill. They met in Paris in March 1895, at the invitation of Jennie’s sister Leonie, who knew Cockran as a friend of their brother-in-law, Moreton Frewin.2 It was two months since the death of Lord Randolph Churchill; Cockran too had recently lost his spouse, and they became friends. Later Cockran met and admired her son Winston, and was impressed with the young man’s wish eventually to enter politics.

William Bourke Cockran was born in County Sligo, Ireland on February 28, 1854. Educated in Ireland and France, he emigrated to the U.S. in 1871, aged only seventeen. He taught French, Latin, and Greek in a private academy and was the principal of a public school in Westchester County, New York. Admitted to the New York bar in 1876, Cockran practiced law in Mount Vernon. In 1878 he moved to New York City. There he went into politics, an independent Democrat who bolted his party in 1896 to campaign for the Republican William McKinley.

Cockran was a mesmerizing speaker, always much in demand. In 1884, he was a delegate to the Democratic National Convention. Between 1887 and 1923 he served five non-consecutive terms in Congress. He was one of those orators who “pack the house,” a thing young Winston also aspired to do.

In October 1895, twenty-year-old Churchill and his fellow-lieutenant, Reggie Barnes, received permission from their commanding officer to travel as observers to Cuba, where Spain was enmeshed in an insurrection. From there Churchill issued his first dispatches as a war correspondent. Lady Randolph wrote Cockran, who arranged to meet them in New York and stay at his apartment at Fifth Avenue and Fifty-eighth Street.

Bourke Cockran was a gracious host. Twelve judges, including a Supreme Court justice, dined with Churchill and Barnes on their first evening. Cockran arranged for the young men to dine at the Waldorf, tour the cruiser New York, observe five fires with the fire commissioner, meet Cornelius Vanderbilt, and visit West Point. (On Churchill’s next visit, in 1900-01, Cockran would enable him to meet President McKinley in Washington, and to dine in Albany with Governor Theodore Roosevelt, who had just been elected Vice-President.)3

In the late evenings, after Barnes had gone to bed, Churchill and Cockran talked at length in the large library. While drinking brandy and smoking cigars, to which Cockran introduced to him, Winston enjoyed long discussions on a variety of topics. Their conversations were the beginning of Cockran’s lifetime influence on the young Englishman.

Churchill was absorbed by what Cockran taught him about oratory. The elder man’s hero was the Irish statesman Edmund Burke. Cockran said Burke had “mastered the English language as a man masters a horse. He was simple, direct, eloquent, yet there is a splendor in his phrases that even in cold type reveals how forcibly he must have enthralled his visitors.”4

Churchill was struck by Cockran’s own mastery of English. “One should avoid scurrility, affections and cant,” Cockran told him: “What people want to hear is the truth—it is the exciting thing…speak the simple truth.” To his mother, young Winston wrote of their “great discussions” on “every conceivable subject from Economics to yacht racing. He is a clever man and one from whose conversation much is to be learned….It is very pleasant staying here as the rooms are beautifully furnished and fitted with every convenience….Mr. Cockran is one of the most charming hosts and interesting men I have ever met.”5

Their long and frequent correspondence developed after Churchill’s visit. It is evident that Cockran, one of the first to see his young friend’s talent and potential, tried hard to direct the young man’s progress. In 1896 Cockran urged Churchill to take up the study of sociology and political economy: “With your remarkable talent for lucid and attractive expression you would be able to make great use of the information to be acquired by the study of these branches. Indeed I firmly believe you would take a commanding position in public life at the first opportunity which arose, and I have always felt that true capacity either makes or finds its opportunity….I was so profoundly impressed with the vigour of your language and the breadth of your views as I read your criticisms of my speech [on the debilitating effect of English rule on Ireland] that I conceived a very high opinion of your future career.”6

In 1899, traveling as a Boer War correspondent with a British armored train through Natal, South Africa, Churchill was captured and imprisoned in Pretoria. There he was amazed to receive a message from the American Consul, informing him that a telegram from New York had arrived. It was from Cockran, wishing him many happy returns on his upcoming twenty-fifth birthday. Churchill replied: “I am alive and have added another to the several vivid experiences which have crowded my last four years. I am also a prisoner, of which fact—as I am a correspondent and a non-combatant—I complain. But, that I am kept in it, is the only serious objection I have to make of this place.”7

As their exchanges on Ireland suggested, Cockran and Churchill did not always see eye to eye. The Boer War was another case in point. In 1900, Churchill began his North American lecture tour on his Boer War experiences. Cockran, who attended his New York lecture, was later criticized for changing his view on the war, which was untrue. Cockran released a statement reverberating with the political collegiality Churchill himself would later practice:

“I cannot understand how anyone can regard my attendance at Mr. Churchill’s lecture as an evidence of sympathy with the British invasion of the Transvaal. I certainly have not changed in the slightest degree my belief that the South African War is the greatest violation of justice attempted by any civilized nation since the partition of Poland. I could, however, have little confidence in the soundness of my own opinion on any disputed question if I were reluctant to hear the very strongest words that could be said in support of the opposite view….My opinion in this instance has been founded almost entirely upon the Blue Books published by the English Government, and if Mr. [Joseph] Chamberlain or Sir Alfred Milner undertook to discuss the question before an American audience, I would be among the most eager to hear him.”8

Churchill’s capacious memory was well stocked with phrases he first heard from Cockran. “The earth is a generous mother” was the best known, but Churchill also recited his most basic beliefs in Cockran’s words: “In a society where there is democratic tolerance and freedom under law, many kinds of evils will crop up, but give them a little time and they usually breed their own cure.”

In Washington on the morning on 1 March 1923, William Bourke Cockran died of a stroke. Just completing his fifth term as a Member of Congress for New York, he was aged only sixty-nine. The Wall Street Journal called him “one of the most brilliant orators in Congress. His speeches, both in and out of Congress, have been considered remarkable for their oratorical effect.”9

Fifty-eight years after Churchill’s first visit to America, he was asked by a distinguished U.S. visitor who had most influenced his by-then-renowned oratory. “It was an American who inspired me,” he replied, who “taught me how to use every note of the human voice like an organ,” Churchill told Adlai Stevenson. “He was my model. I learned from him how to hold thousands in thrall.”10

As young Winston’s most profound early influence, the obscure Irish-American exerted lasting influence on Churchill’s oratory, phraseology and political philosophy. He instilled in the young man skills that would be used for over half a century in politics. Through his last years, Sir Winston retained the highest regard for Cockran, the friend he remembered and honored.

Mr. Glueckstein, of Kings Park, New York, is freelance writer and a world traveler in search of Churchill.

Curt Zoller and Michael McMenamin, Becoming Winston Churchill: The Untold Story of Young Winston and his American Mentor (Westport, Conn.: Greenwood Press, 2007). This is a thorough and finely researched “standard work” on the relationship.

It is just a week since I was sitting in the pavilion at Syon with Adlai Stevenson…. Learning I was Winston Churchill’s cousin, he suddenly started to reminisce about his last meeting with him in the early 1950s. He said: “I asked him something I’d always wanted to know. I asked on whom or what he had based his oratorical style. WSC replied: ‘It was an American statesman….’ You’d never have heard of him. He wasn’t a great statesman, just an Irish politician with the gift of the gab, but Winston called him a statesman…his name was Bourke Cockran.”

I couldn’t help interrupting with: “He married my mother’s sister Anne and darling Uncle Bourke left us every penny we have!” Adlai Stevenson looked amazed and said: “Well, he never said there was a family connection, how strange….” Nor was there, really, for Bourke married the sister of Marjorie Ide, who married Winston’s first cousin, my father [Shane Leslie].

But who else in England would have known all about Bourke! Such a character. I adored him. I was twelve when he died and his great voice and thickset shoulders and granite ugly deeply hewn face came back to me. How Bourke would have loved to have known what a lot he could give to that young man. That his own talent for oratory, wasted on tiresome American financial problems, should in the end help a voice that would hold fortunate Europe through its most terrible hour.

Adlai was surprised at my interjections but went on: “Winston then to my amazement started to quote long excerpts from Bourke Cockran’s speeches of sixty years before.” Of course A.S. couldn’t check the absolute accuracy, but there was Winston pouring out to him this tremendous impact on his youth….

Within twenty-four hours of telling me all this, which moved him greatly, Adlai Stevenson was dead.

8 “Statement By Mr. Cockran. Says He has Not Changed His Views on the Boer War,” The New York Times, 15 December 1900, 9. Rt. Hon.Joseph Chamberlain (1836-1914), Liberal Unionist, a leading imperialist at the time of the Anglo-Boer War. Sir Alfred Milner, First Viscount Milner (1854-1925), statesman and colonial administrator.