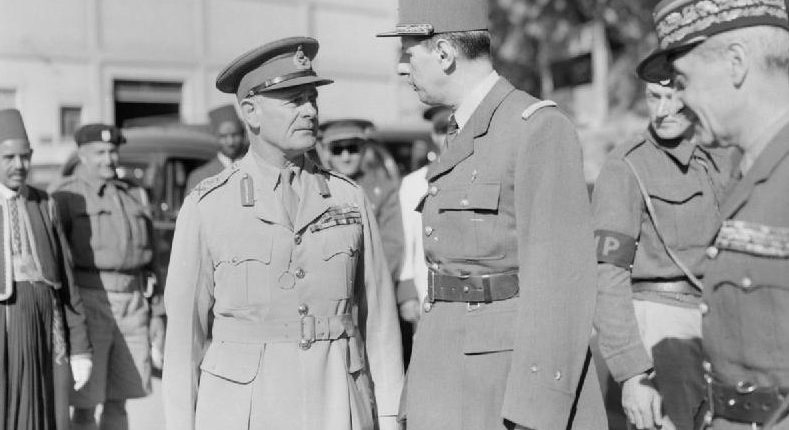 Churchill said, “The only thing worse than fighting with allies is fighting without them.” Wavell with Free French leader Charles de Gaulle at Cairo, 1 April 1941. (Imperial War Museum, public domain)

Archibald Percival Wavell (1883-1950) is an enigmatic figure among Churchill’s senior military men during the Second World War. Unlike Brooke, Alexander and Montgomery, who rose to the top during the war, Wavell was one of the British Army’s most senior generals when it began. He then held the very important and soon to be crucial post of Commander-in-Chief, Middle East.

There was never much chemistry between Churchill and Wavell, who told his intimates that the Prime Minister had never liked him. After their first meeting Churchill told his associates that Wavell reminded him of the chairman of a suburban golf club. Churchill was highly, almost compulsively, articulate; Wavell was given to long silences. And yet….

Churchill twice removed Wavell from command, then twice reappointed him to positions of equal or greater importance. When Wavell died shortly after the war, he was the only person ever to have wielded a Field Marshal’s baton and been Viceroy of India. Largely forgotten today, he surely deserves a second look.

The Middle East theater was vast, the resources available to Wavell in 1940 few. When France left the war and Italy entered, the challenges were almost overwhelming. No one yet realized how hollow Italy’s military capacity was. No one knew the attitude of French authorities in Syria, who with their sizable garrison were still loyal to Vichy. German and Italian propaganda played on widespread Arab nationalist hostility to Britain, largely over the Palestine issue. Egypt, nominally independent and neutral but Wavell’s base area and the location of the Middle East Command’s HQ, was home to a very large number of hostile nationalists. Thus Wavell also faced an internal security threat.

Britain was far away and reinforcements of men and material for the Middle East arrived slowly. Some reinforcements brought new problems of their own. The Indian Army divisions brought none of note, but the four Australian and New Zealand divisions were a different matter. The Australians were very jealous of their autonomy. The splendid New Zealand Division—its country’s only one—was watched over very carefully not only by its own distant government, but by its formidable commander and friend of Churchill, Major General Bernard Freyberg VC.

As his force built up, Wavell had to manage all the complexities of coalition warfare. Nonetheless, between June 1940 and April 1941, Wavell directed several brilliant campaigns—remarkable juggling acts requiring very cool nerves.

The most spectacular of his successes took place in the Western Desert of Egypt. Mussolini had entered the war for what he imagined would be easy pickings from the collapsing British Empire. High on his list was Egypt. His generals in Italian-occupied Libya, well aware of their forces’ fragility, dragged their feet. Finally, after much prodding and the threat of removal, they lurched into motion. Crossing the Egyptian frontier, they advanced 60 miles, then stopped and dug in. There they remained.

Sensing the Italians’ hesitancy and lack of confidence, Wavell counterattacked with the Western Desert Force (later the 8th Army). Two divisions, the 7th Armoured (“Desert Rats”) and the crack 4th Indian, launched Operation Compass in December 1940. In two months they wiped out the Italian 10th Army, taking 130,000 prisoners and mountains of equipment and supplies. Soon British tanks were halfway to Tripoli, the command center for Italian Libya. They got there, suffering only 2000 casualties.

By that time Wavell had launched another shoestring offensive, this one against Italian East Africa (Somaliland, Eritrea, and Italian-occupied Ethiopia). That campaign, now nearly forgotten, was in fact very important. With the Italians in East Africa, the Red Sea was a war zone and American vessels could not transverse it. If the Italian territories were conquered, the Red Sea would open to American shipping. That in turn ensured delivery of cargoes to Egypt. This would ease Wavell’s supply problem and lighten the burden on hard-pressed shipping.

Wavell had encountered Orde Wingate, a gunner officer (artilleryman) who had commanded Britain’s troubled Palestine Mandate before the war. Wingate had raised and was running a very unconventional counter-insurgency unit dubbed “Special Night Squads.” Their object was to counter Arab raiders that struck at Jewish settlements. Wavell’s support provided cover for tactics that were often borderline illegal.

Wavell’s successor in Palestine took one look, closed Wingate’s operation down and shipped him home. But Wavell did not forget. He called Wingate to Cairo and let him raise and direct Ethiopian irregulars against Italian garrisons in Ethiopia. Wingate’s success would lead Wavell to employ him again later in Burma, with very controversial results.

Important as the victories against the Italians were, they brought nemesis in their train. Fearful that the British successes might imperil Mussolini’s regime, Hitler deployed German forces to the Mediterranean, and prospects for Wavell’s theater darkened. A German “blocking force,” initially one light division, began to arrive in Tripoli in February 1941. With it came Major General Erwin Rommel, a talented, unorthodox, highly aggressive tactician. Attacking against orders, before his units were even complete, he rapidly erased all the gains of Operation Compass. April 1941 saw the Western Desert Force back behind the Egyptian frontier, leaving an Australian infantry division besieged in Tobruk.

One of the explanations for the rapid reversal of fortune was that Wavell had shifted some of his best troops to Greece after the conclusion of Compass, leaving inexperienced units in the desert. And it was in Greece that a second disaster now loomed.

Britain had offered a security guarantee to Greece in 1939. In autumn 1940 Mussolini, despite his stalled campaign in North Africa, launched his ill-prepared troops from Italian-occupied Albania into Greece. Like his march on Cairo, his march on Athens foundered. The weak Italian forces encountered forbidding terrain in northern Greece and tenacious resistance by the Greek Army. Like the Italian debacle in North Africa, this brought the Germans onto the scene.

Mussolini’s attack triggered the British guarantee to Greece. RAF squadrons were soon operating from Greek airfields, within striking distance of Romania’s Ploesti airfields and Germany’s principal source of oil. With an invasion of Russia pending, securing Germany’s southern flank and safeguarding its oil was crucial. The Wehrmacht prepared for a Balkan spring offensive to save their allies, protect their oil and, again, expel the British.

Pressure began to mount on Wavell to send troops to aid the Greeks. Churchill told him that when the Western Desert Force finished mopping up the Italian 10th Army, it would be halted in a defensive posture with some troops released for Greece. Several months elapsed while London and Cairo discussed theater strategy. A British mission discussed with the Greeks how the alliance would work on the ground. Then a corps-size British force was sent, its two infantry divisions comprising Australians and New Zealanders.

Everyone from Churchill down had reservations about the venture but felt the British had no choice. Having promised assistance, they could not leave the Greeks to their fate. Yet the force commander was planning the evacuation of his troops even as they disembarked at the Piraeus.

The rest is swiftly told. The British reached the line they had agreed with the Greeks to hold, only to find the Greeks not there. Exhausted and virtually immobile, the Greeks could not redeploy from their existing positions, where the Germans soon surrounded them. Lieutenant General Sir Henry (“Jumbo”) Maitland Wilson conducted a skillful and successful retreat, powerfully aided by accurate and timely intelligence from Bletchley Park, and the Royal Navy did its usual fine work in the evacuation. Most of Wilson’s force escaped, but left both a number of personnel and masses of equipment behind.

Then came Crete, where many units evacuated from Greece were installed. The garrison, commanded by Freyberg, was a jumble of units, many whose equipment had been left behind on Greek beaches. Freyberg was new to command beyond division level. Despite Bletchley’s putting the entire German plan into his hands, tactical fumbles by subordinates gave the assaulting German airborne units an opening. That was all the skillful, determined German paratroopers needed. The Royal Navy performed heroically, evacuating most of Freyberg’s men, but many had to be left behind. And the Navy’s losses were crippling.

By late spring 1941, Wavell’s scorecard looked bleak. He had been defeated in the desert, in Greece, in Crete. Much of this was not Wavell’s fault. He’d been forced to spread his often inexperienced forces too thinly against an enemy with initiative and air dominance. But Churchill needed successes to sustain credibility with the Americans and British morale. A question mark now hung over General Wavell. Then came a revolt in the British client state of Iraq and another drubbing by Rommel. Together, these proved to be the final straw.

Iraq was a British creation and its Hashemite king depended on British support. But anti-British Arab nationalism was widespread, especially in the British-equipped Iraqi Army. Wavell, worried about his internal security, urged London to keep Arab nationalism in mind when formulating Middle Eastern policy, particularly Jewish immigration into Palestine. Churchill, who was pro-Zionist, believed Wavell was pro-Arab. Finally he told Wavell bluntly that what Arabs understood was strength and success. The best way to keep them quiet was for Wavell to win some battles.

Iraq boiled over in the Spring of 1941: a revolt led by officers who colorfully called themselves the Golden Square. It was the perfect catalyst for Churchill’s accumulating doubts.

Stretched everywhere, Wavell was reluctant to take action against the Iraqi rebels, urging a political solution. It took a direct order from Churchill to move an improvised relief column across the desert between Palestine and Baghdad. The Iraqi revolt collapsed quickly but Churchill could not help contrasting Wavell’s reluctance with the alacrity with which the Government of India and its army responded.

Indian authorities had a longstanding interest in Iraq. The Indian Army had borne the brunt of the dreadful First World War campaign that conquered Turkish Mesopotamia. The Indian Army regarded “Messpot” (Iraq) and the Persian Gulf as integral to the defense of India. The revolt activated its long-established contingency plans for intervention. While Wavell dragged his feet and then sent an ad hoc force using civilian buses taken off the streets of Palestine’s cities, the Commander in Chief, India, General Sir Claude Auchinleck (who had fought in Iraq) landed the 10th Indian division at Basra. Nearby, the Shaiba airfield was taken by transport aircraft full of troops. Churchill had met Auchinleck in 1940 when “the Auk” was in Britain, and liked him. Now he had a name to pencil in as Wavell’s successor—if one was needed.

Continued in Part 2: Wavell in India

Dr. Callahan is Professor Emeritus of History at the University of Delaware and a leading scholar of the Indian Army in the two World Wars. He taught at the University for thirty-eight years and was director of the Master of Arts in Liberal Studies program, where an annual student prize bears his name. He is the author of Churchill and His Generals (2007) and Churchill: Retreat from Empire (1997)