Elizabeth Layton in “Darkest Hour”: The Annexe and War Rooms 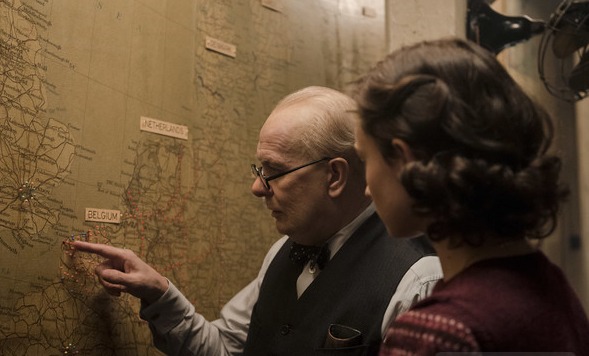 In the 2017 film Darkest Hour, on Churchill in May 1940. I am puzzled by two characters. There is a young man who is seen near Churchill at Chartwell and the underground War Rooms. The Darkest Hour cast names him “John Evans.” The name of another man in the cast, “Tom Leonard,” suggests nothing. He is the driver of Churchill’s car when the PM abruptly bolts and heads for the Underground. (There follows the dramatic but fictional “Underground scene” described in your review.) I wonder who those young men are supposed to be? An explanation of the above-ground Annexe and the below-ground War Rooms would also be helpful, since Churchill seems to appear in both.

Neither “John Evans” (played by Joe Armstrong) nor “Tom Leonard” (Eric MacLennan) were real characters. Evans, a private secretary seems closest in demeanor to John “Jock” Colville, private secretary in 1940-41, 1943-45 and 1951-55. Leonard represents a chauffeur from the government pool Churchill used during the war. Typist-secretary Elizabeth Layton (brilliantly played by Lily James) did exist, but her appearing in 1940 is dramatic license. The real Elizabeth actually didn’t join Churchill’s staff until May 1941. And there is some small confusion about Downing Street Annexe and the more famous War Rooms.

The late Elizabeth Layton, a faithful wartime secretary, would love her portrayal by Lily James. Although not present until 1941, her character was probably selected for her singular prominence. Among many devoted stenographer-secretaries, she wrote with humor and eloquence about her experiences. Her book is well worth seeking out: Mr. Churchill’s Secretary (the original 1958 title), or the reprint, Winston Churchill by His Personal Secretary.

In the Darkest Hour filmscript, “John Evans” is first seen at Chartwell, showing around the newly arrived Miss Layton. The script describes him as “an immaculately-groomed rake…snobbishly thinks himself infinitely superior to the Elizabeth Laytons of the world.” (At times some thought of Jock Colville that way. Told once that working people often drove their children to school, he quipped, “Couldn’t their nannies do that?”)

“If he stretches out his hand and says, ‘Gimme,’ you need to anticipate what he wants: Black pen, red pen, paper, or ‘Klop,’  that’s his hole punch.” (WSC hated staples, insisting on hole-punched pages connected with a Treasury tag.) “He mumbles, so it’s almost impossible to catch everything. And be prepared to type fast—short bursts—and double-spaced. He hates single-spaced—hates it! Good luck.”

Downing Street Annexe was housed in the ground floor rooms facing St. James’s Park to the right of the War Rooms’ public entrance today. It was considered much safer in an air raid than 10 Downing Street. Today, tourists flock to the Churchill War Rooms, drawn by the drama and hubris of the Blitz. Sir Martin Gilbert understood the rationale—the Annexe, after all, is pricey office space. But he always thought the Annexe should have a blue plaque for its historic role.

On walking tours of London, Sir Martin would always point to small filled-in square holes on each side of all the windows, where brackets for steel air raid shutters were once affixed. “That,” he would say, “is where Winston Churchill really fought the war. Not the ‘hole in the ground,’ as he sometimes called it.”

…below [the Annexe] there stretched two whole floors of “safety” accommodation. Beneath a vast concrete block which had been set in at ground level there was first of all General Headquarters, known as the Cabinet War Room or C.W.R., where the Prime Minister, all Cabinet Ministers and the Chiefs of Staff had rooms as well as the Service Planning Staffs. Here some of the most brilliant British officers spent their days breathing conditioned air and working by daylight lamps, to emerge white-faced and blinking for a few hours in the evening. The C.W.R. was reached by a spiral staircase and was supposed to be safe from bombing attack. Below it, on a still lower level, had been constructed a whole floor of tiny bedrooms for the lesser lights, each with its allocated owner, and it was here that those on late duty would retire when bedtime came.

Mr. Churchill could hardly ever be persuaded to descend to the C.W.R. merely for “sheltering” purposes. He often held Cabinet meetings there in the evenings, after which he would return to the ground-level flat to finish off the evening in his study. I never knew him use his bedroom below stairs—thick steel shutters guarded the window of his bedroom in the flat, and these he felt [were] sufficient protection.

Since Elizabeth arrived in 1941, she would not have known that Churchill did sleep a few nights below ground earlier. These were during the height of the Blitz, in the autumn of 1940. After that the bombing eased, and he spent his nights in the Annexe or Number 10.

Answering this question reminds us of that superb film, Darkest Hour. Just before he died, the greatest Churchill actor Robert Hardy was confident that Oldman would equal his performance. Praise goes also to make-up artist Kazuhiro Tsuji, who came out of retirement to bring Churchill back to life. Kirstin Scott Thomas played an excellent Clementine, as did Lily James as Elizabeth Layton.

On a visit to Hillsdale College, Gary Oldman explained how he noticed a ridge worn into the arm of the chair in the War Rooms. This, he said, was where Churchill constantly drummed his ring-finger at the apex of events. He tried to work that into his own portrayal—an example of the fastidious attention to detail which makes the film so special. Here is the video: