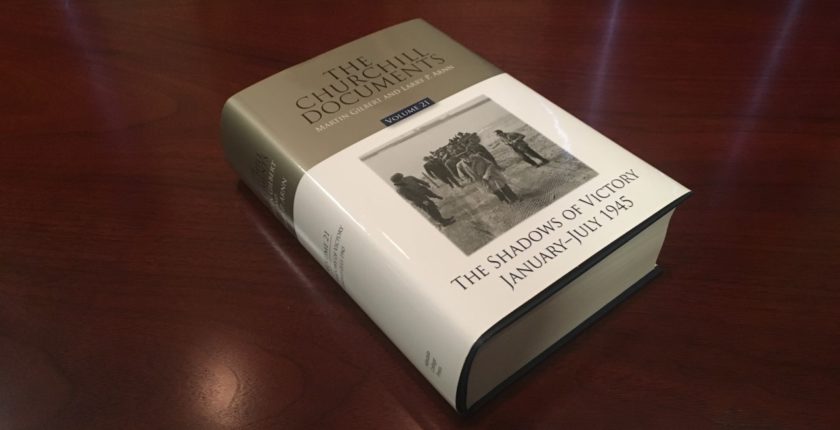 Volume 21 of The Churchill Documents, The Shadows of Victory, January-July 1945, published by Hillsdale College Press.

The following transcript is of Sheila Ryan’s speech given upon reception of the 2019 American Society for Indexing Excellence in Indexing Award. Ryan received the award for her work on volume 21 of The Churchill Documents.

Thank you to the American Society for Indexing. I am very happy that ASI is continuing to sponsor this award. Thank you to the judges; it’s gratifying to know that this award is based on the evaluation and esteem of my professional colleagues.

When I first started learning about indexing as a profession, I joined the Golden Gate Chapter of ASI, where I met my first indexing mentor: Janet Russell. Janet organized Peer Review sessions and encouraged me to get involved with the chapter. She also attended the social gatherings at Macrex workshops even though she used different indexing software. Janet truly understood the power of networking and the importance of collegiality in making our profession stronger for all indexers. We miss you, Janet.

Macrex workshops were a huge part of the development of my indexing. My husband and I still laugh about how I came home from the first day of that very first workshop and I couldn’t stop talking about how I had found my people. I found new friends and colleagues and learned about not only indexing software, but computer systems, online security, and the importance of always having a current backup! The success of my indexing business would not be the same without the support and guidance of Gale Rhoades. Thank you, Gale.

After I moved to Portland, I found another amazing group of indexers in the Pacific Northwest Chapter of ASI, and a wonderful Portland Peer Review group. Thanks again for the cake, Maria and Sam! Thank you to all of the indexing colleagues who have helped me along the way. Thank you to my siblings, and to my parents, Tom and Joan Ryan. I grew up in a family where no books were off limits. I ran a lending library out of our basement, and my grandmother would test us on our knowledge of each “Bookhouse” volume as we finished reading them over the years. I was well–prepared for a career revolving around books. Thank you to my husband, Demian Ebert, whose ongoing support and encouragement remains essential to my indexing career.

When I first heard from Soren Geiger about possibly indexing the Churchill Documents, it was a bit daunting, and not just because of the length of the volumes. As part of a phone interview, I reviewed and critiqued the index to a previous volume, which I learned had been indexed by Sir Martin Gilbert, Winston Churchill’s official biographer from 1968 to 2012. No pressure there! Fortunately, they hired me and Hillsdale College Press has been a wonderful client. They have allowed an appropriate amount of time for the indexing, and my indexes have improved with each volume. Thank you, Soren and Dr. Arnn, and thank you to the Press and its staff. What started for me with Volume 18, and will conclude with Volume 23, is a very small part of the monumental effort that is the Churchill Project at Hillsdale College.

Volume 21 covers January through July 1945, when numerous events happened very quickly as World War II ended. A key challenge of indexing this volume was the nature of the text—it is not a typical narrative; it includes Churchill’s public and private correspondence, transcripts of his speeches, Chiefs of Staff meeting minutes and reports, and Parliamentary proceedings. The index therefore reflects the needs of the scholars who will be using it, because this audience really does want to know which Member of Parliament criticized Churchill during a debate, even if that speaker did nothing more than say “Rubbish.” Indexing to a degree that would not be recommended for other books was essential for this volume.

Although the text contains only a subset of the material related to or written by Churchill during the time period covered, a full picture of Churchill emerges: his speaking style, his sense of humor, the manner in which he corresponded with his friends and colleagues as well as his rivals, and his attention to even the smallest details throughout the vast war effort. His speeches were highly prepared and practiced, and he was always ready to add (seemingly) extemporaneous passages and asides. Here is one example, from a Municipal Elections debate:

Mr. Churchill: The right hon. Gentleman has given a paraphrase of what I said, and anyone can see what a trustworthy witness he is by listening to and comparing the grotesque travesty which he has uttered with what I have actually said. It is quite true that I did not accuse the right hon. Gentleman of not having taken an interest in the war. Of course, he did. He took an interest in some other matters, too – very much more, if I may say so, than any man in this House. We have accepted – (Hon. Members: ‘Answer’.) There is nothing to answer. (Laughter.) I always notice that the party opposite indulge in laughter which resembles a crackling of thorns under a pot whenever they are confronted with any mental proposition which their intelligence forces them to resent or reject.

How would you index this passage? I indexed the title of the speech as a subheading under “English politics,” “House of Commons, domestic affairs,” “Labour Party,” “Morrison,” “Parliament,” and “speeches [by Churchill].” I did not index “thorns” or “laughter,” but this was a passage that stuck in my mind, and further research revealed that Churchill was referring to Ecclesiastes 7:6:“For as the crackling of thorns under a pot, so is the laughter of the fool: this also is vanity.”

This passage illustrates the richness of the text, a depth that goes far beyond simply indexing the titles of speeches or the names of the people Churchill was talking to. Volume 21 provides a fascinating window into the first seven months of 1945, and I hope I am not being vain when I state that my index does locate the information readers seek, and provides detailed access to the information within the text. Thank you.

Sheila Ryan is the owner of Ryan Indexing in Portland, Oregon and has worked for Hillsdale College Press to index volume 18-23 of The Churchill Documents. She recently received the 2019 ASI Excellence in Indexing award for her index to volume 21, The Shadows of Victory, January-July 1945.