Churchill and Switzerland, as Explored by Werner Vogt 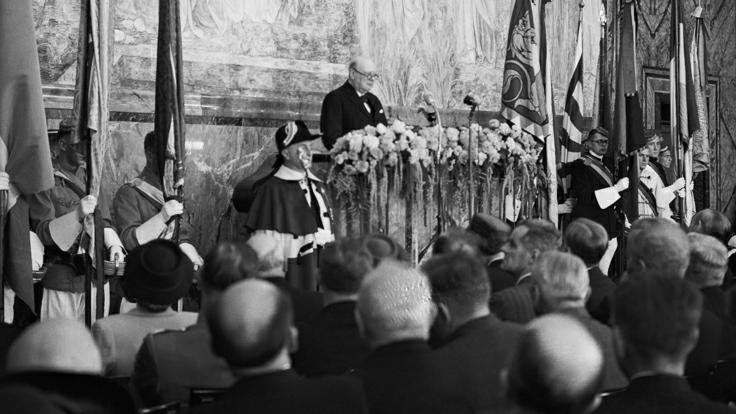 Above: Churchill speaks on behalf of a reunited Europe, Zürich, 19 September 1946.

Churchill first visited Switzerland in 1893, accompanied by his brother Jack. Their parents sent along a tutor to improve their language skills. Churchill had just managed to be accepted into Sandhurst, Britain’s military academy. Half a century later, for his Zürich speech on European unity, he visited Switzerland for the last time. In between lay four more visits: 1894, 1904, 1906 and 1910. 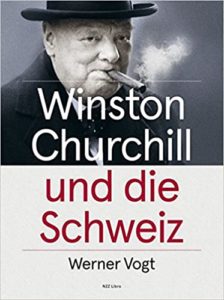 Churchill kept abreast with developments in perennially-neutral Switzerland. He published articles in the Neue Zürcher Zeitung and other Swiss newspapers. He also kept in touch with Swiss friends. While he admired the beautiful Swiss scenery, he preferred spending his painting holidays in the south of France. Certainly his French was much better than his almost non-existent German.

Swiss journalist Werner Vogt offers an impressive book that fills a gap in Churchill studies. The profuse illustrations alone make it worthwhile. Many depict his 1946 Zürich visit, and his life as a painter. Despite its large format and high-quality binding, this is no coffee table book. In fact, Vogt provides detailed information about Churchill’s emotional attachment to this small but strategically and economically important country.

Keeping in mind his younger Swiss readers, Vogt begins with a short but useful and insightful overview of Churchill’s life and career. He then focuses on Churchill’s visits. Naturally we have the dramatic story of how Winston and Jack nearly drowned in Lake Geneva in 1894: It was a boating expedition that almost went fatally wrong.

Later on, the Swiss holiday home of Sir Ernest Cassel, the British financier, brought Churchill to Switzerland. Cassel, who had close links to the British aristocracy, was like a father figure to Churchill. Had Churchill failed to enter Sandhurst, Cassel would have offered him work as a banker in the City of London.

In 1900 Cassel constructed his Villa Cassel, high in the Alps. The house was halfway up Riederfurka mountain, whose peak was 2065 meters above sea level. The beautiful peak was in the middle of nowhere, far from any transportation links. Material for its 25 rooms, bathrooms, salons and amenities was hauled 30 miles by foot or donkey. On the muscular shoulders of workers, furnishings were lifted up 1300 meters along steep alpine paths.

By 1902 a luxurious mini-castle stood amidst breathtaking scenery. Churchill could not resist Cassel’s invitations, and visited three times. Churchill’s blooming political career, marriage to Clementine Hozier, and growing family prevented any visits past 1910. Cassel died in 1921, and with him chances for holidays in the Alps.

While not a frequent visitor, Churchill nevertheless dealt with Switzerland’s neutrality and its strategic position. Here Vogt’s account is enlightening. It culminates with extensive analysis of the circumstances and and preparations for Churchill’s speech at Zürich University on 19 September 1946. He called for rapprochement between Germany and France, for the creation of a “united Europe.” Churchill made sure to note that Britain was a friend, but not part of a united Europe, which he did not define precisely, as he, Britain, and the Commonwealth had a special and separate role to play.

…that Churchill was distressed at not receiving an honorary doctorate. University statutes required that it be a unanimous decision, which proved impossible. The university’s president abandoned the attempt. Instead he conferred a personal diploma of recognition.

Werner Vogt sheds new light on Churchill’s love for painting, a hobby he discovered only at the age of 41. The Swiss painter Charles (Carl) Montag, who instructed Churchill on his art, was instrumental in bringing Churchill to speak at Zürich. Well-known in his own right, Montag was a talented teacher, who called himself an “art mediator.” The two men met in 1915, and developed a deep friendship.

Churchill was impressed by Montag’s artistic and pedagogical talents, and always keen to improve his painting skills. Until Montag’s premature death in 1956 they kept in regular contact. They met sometimes, as in 1946, or later at Chartwell. Churchill was convinced that he benefitted greatly from Montag’s tutoring. It was also Montag who put Churchill in touch with Willy Sax and his Swiss paint factory. Churchill was impressed by the quality of Sax’s paints, and spoke with  him at length during his 1946 Zürich visit. Subsequently, he invited Sax to Chartwell, and visited him several times in the south of France. In 1956, Sax received that highest gift of regard, one of Churchill’s paintings.

Vogt managed to interview a number of Swiss contemporaries who had met Churchill, such as his Zürich driver in 1946 and some of his maids at Chartwell. Clementine Churchill liked to employ German-speaking Swiss maids, Vogt writes. It enabled her to practice her fluent German.

Werner Vogt has produced a most interesting and very readable volume. Even Churchill aficionados will find many nuggets of fresh information.