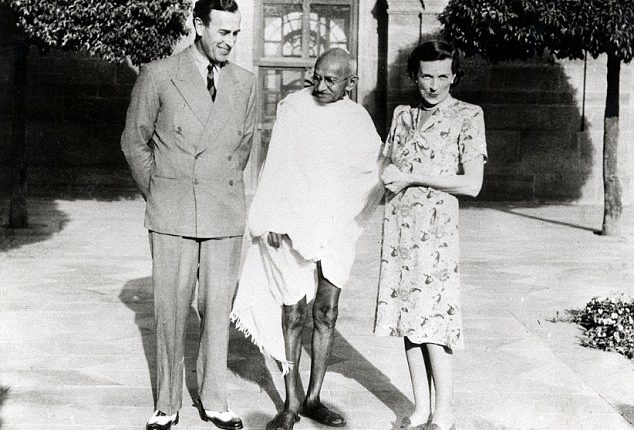 Lord Mountbatten with Mahatma Gandhi and Edwina in the garden of the Viceroy's House New Delhi, 1947. Gandhi deplored the violence of the separation; in January 1948 he was assassinated by a Hindu nationalist who thought he was being too lenient with India’s Muslims.

Featured Image: Lord Mountbatten with Mahatma Gandhi and Edwina in the garden of the Viceroy’s House New Delhi, 1947. Gandhi deplored the violence of the separation; in January 1948 he was assassinated by a Hindu nationalist who thought he was being too lenient with India’s Muslims. (Daily Mail)

The sad aftermath of Partition

The subcontinent was divided in 1947 along religious lines into India (mostly Sikh and Hindu) and Pakistan (Muslim). The number who died in the following violence is still disputed. Most historians believe it was a million civilians or more. What is not in doubt is that they died in the most horrifying circumstances. Arson, torture, mass rape, desecration of temples and indiscriminate murder were commonplace.

As many as 12 million people were uprooted in the largest human migration in history. Civilians found themselves on the wrong side of the new border . They travelled to their new nation-state, often encountering—and butchering—those of different religious persuasions heading in the opposite direction. The bloodbath followed a nationalist struggle that had lasted for decades. It will forever remain a dark stain on Britain’s colonial legacy, with accusation and counter-accusation thrown over who was resonsible.

“Downton Abbey of the East”

The latest contribution to the debate comes in the form of the new film Viceroy’s House.

Set against the backdrop of looming partition, it is a fictionalised version of events in the 340-room Lutyens palace in Delhi of the Indian Empire’s last Viceroy, Lord Louis Mountbatten, who had been appointed to administer self-rule.

In one way, it is rather like a Downton Abbey of the East. There’s plenty of below-stairs intrigue—the palace had more than 500 servants. Hugh Bonneville (who played the liege of Downton) portrays Viceroy Mountbatten, Gillian Anderson his Vicereine, Edwina. When the film concentrates on the melodrama of a handsome new Hindu manservant falling for a beautiful Muslim girl, it combines Bollywood romance with a good deal of period character. When it shifts to politics, it is historically and politically repugnant, promoting conspiracy theories and peddling vile falsehoods.

Worst, without any evidence it blames Sir Winston Churchill and his faithful, honest wartime military secretary Hastings Ismay of being responsible for the massacres of innocent men, women and children during the partition of India. Yet it absolves from blame the man who was primarily responsible—Louis Mountbatten himself.

It is worth reminding ourselves of the true horror of the months following independence.

Before the euphemistically named “difficulties” of partition were settled, houses were burnt and looted in the presence of policemen; women and children were flung from moving trains; the district engineer of Lahore was attacked in his office, tied to a post and sawn into pieces; patients were murdered in their hospital beds; babies were taken from their mothers, cut in half and returned to them; villages were mortar-bombed. Furthermore, there were mass suicides; Sikhs were forcibly circumcised; mobs stamped people to death; corpses were thrown into wells to defile water supplies; people were ordered to stand or sit in long rows to be shot one by one; and children were burnt alive in pits.

So it went on, week after genocidal week. The anarchy reached a scale where the authorities were able to do no more than note down reports of slaughters. Typical was a report from the commanding officer of the Second Battalion of the First Gurkhas. They had discovered a train in the Punjab filled with 200 dead Muslims who had been ambushed by Sikhs.

“The majority of wounds had been caused by sword and spear thrusts,” the report said. The victims included “a small girl aged four or five with both legs hacked off above the knees but still alive; a pregnant woman with her baby ripped out of her womb—she died; an old man who had served in the Hong Kong-Singapore Royal Artillery with six spear wounds and still alive.”

This was the reality of what Mountbatten was to call India’s “unbelievably happy beginning.” And the film squarely places Churchill in the frame for the massacres. It claims that, in an unwanted partition plan drawn up by Churchill, Pakistan was “conjured out of thin air” solely to provide access to Middle Eastern oil for the scheming, evil British and ensure that Russia did not get its hands on the port of Karachi.

As well as this baseless Anglophobic conspiracy theory, it depicts the founder of Pakistan, Mohammad Ali Jinnah, as a puppet of the British and completely ignores the struggle for an independent Pakistan that had been taking place for decades.

The film draws on The Shadow of the Great Game by Narendra Singh Sarila, a former Mountbatten aide-de-camp. Its historical consultant is Lady Pamela Hicks, Mountbatten’s daughter. As a Churchill biographer and a historian who studied Mountbatten’s disastrous role in India for my book Eminent Churchillians, I have seen a mountain of evidence to show the Viceroy’s handling of partition was nothing short of a catastrophe.

“Not a Matter for Applause”

When, in February 1947, the Labour postwar Prime Minister Clement Attlee announced in the Commons that Mountbatten was to be the next Viceroy, the appointee himself had just delivered a speech to the Joint Services Staff College. On hearing the news, his audience burst into applause and Mountbatten replied modestly: “It is not a matter for applause, I assure you.” He had hit upon the cold truth.

Attlee had said that Britain would hand over to an Indian government “capable of maintaining peace” no later than the end of June 1948. The allocation of a mere sixteen months to wind up three-and-a-half centuries of British presence would have imposed fearful strains on an already overstretched civil administration. Yet no sooner had Mountbatten reached India than he advanced the timetable for partition by nearly a year, to August 1947, despite concerns about potential violence and warnings from members of the Viceroy’s staff that partition “would mean a huge military problem.”

The new partition date meant that Cyril Radcliffe, the London lawyer whose job it was to draw the frontier between India and Pakistan, was given an unreasonably short length of time to complete his task. He had never set foot in India before and later said he could not have done the job properly even in two years. Mountbatten gave him forty days.

In addition, Mountbatten was profoundly biased towards India and against Pakistan.

From their first meeting on 5 April 1947, Mountbatten and Jinnah (the Muslim League leader) failed to establish a rapport. Among the epithets used by the former to describe Jinnah were “psychopathic case,” “evil genius,” “b******” and “lunatic.” By total contrast, he was bewitched by the Indian leader Jawaharlal Nehru. Even though Mountbatten’s wife was sleeping with Nehru—or maybe because she was—he said: “When Nehru started to call Edwina and me his ‘dear friends,’ I began to get the feeling we were halfway home.”

In the new film, however, there is not the tiniest hint that Edwina was having an affair with Nehru—which understandably aroused suspicions among Muslims, who feared Nehru had a big influence over the Viceroy. But then, it gives an inverted portrayal of other matters.

For example, Radcliffe, one of the greatest legal minds of his day, is depicted by Simon Callow as a sweaty nonentity, cravenly yielding to Ismay’s demands to create a larger Pakistan—something apparently done without Mountbatten’s knowledge. What actually happened was, in fact, the precise opposite. I was told by Christopher Beaumont, the secretary to the Radcliffe Boundary Commission that drew up the borders, that it was Mountbatten himself who visited Radcliffe the night before details of the partition boundaries were made public, and prevailed upon him to give more territory to India.

And his disgraceful conduct gets worse. A recurring feature of his viceroyalty is his naivete. He was sure he knew the Indian situation better than those who’d spent their entire lives there.

He was “little impressed by the opinions of the governors of the Punjab and Bengal about the horrific consequences of partitioning their provinces.” Though he was warned it would be a disaster, he delayed publishing the boundary details until after independence, so any violence that followed would be treated as the responsibility of the incoming governments, not the British.

Had the movement of populations caused by the new boundaries taken place under British rule, with British troops and officials enjoying full power to act, Punjabi inhabitants would have been far calmer. The atmosphere of mass panic, anarchy and terror might have been avoided. To add to the carnage, Mountbatten ordered British Army units to be shipped home when they were needed in the Punjab and North West Frontier to stop the violence. He expressly recommended that many of those units which remained “should not be called for internal security purposes.” On top of this, he absented himself from the fray to attend the wedding of his nephew, Prince Philip, to the Queen.

Back in London, Churchill had no difficulty in putting his finger on the absurdity of the situation. “Can the House believe,” he said, “there are three or four times as many British troops in little petty Palestine as in mighty India at the present time?….let us not add—by shameful flight, by a premature hurried scuttle—at least, let us not add to the pangs of sorrow so many of us feel, the taint and smear of shame.”

Throughout the film, blunders by Mountbatten are blamed on others. British governors are depicted as racist idiots. In truth they were men such as Sir Evan Jenkins, governor of the Punjab, who loved India. Many predicted exactly what would happen under the Mountbatten Plan, but were ignored.

There are other irritating inaccuracies. The film depicts Ismay as being already in India, plotting with Mountbatten’s predecessor, Lord Wavell. In fact, he went to India as the new chief of staff, at the same time as Mountbatten.

Original footage from 1947 and 1948 is interspersed with modern, recreated footage. This gives the movie a misleading documentary feel and its accusations a spurious verisimilitude.

Most egregiously, Churchill,  then leader of the opposition, was then in no position to give executive orders to anyone. He is depicted denouncing the transfer of power, sneering at “primitive Indians.”  No such broadcast was made, and Churchill never used the word “primitive” with regard to Indians in 1947. Indeed, he directed the Tories to vote in favour of the Indian Independence Bill on 4 July 1947. (See comments below.)

Above all, the emphasis on Churchill as the villain of this movie. The production was part-financed by BBC licence fees through BBC Films. It exemplifies the mania for making our greatest national hero into a villain, or presenting him as a joke.

It is stated that the director, Gurinder Chadha, herself lost family members in the partition. Sadly, she has done their memory no service. This is a tawdry, if visually stunning, compilation of conspiracy theory, unproven allegation and fiction.

“Indians are Getting Post-Truth History about Winston Churchill.”

Andrew Roberts is the author of Churchill: Walking with Destiny. He also wrote Masters and Commanders: How Four Titans Won the War in the West and Storm of War: A New History of the Second World War. This article is extended from the Daily Mail, 11 March 2017.