A Vital Medical Contribution by Doctors Vale and Scadding 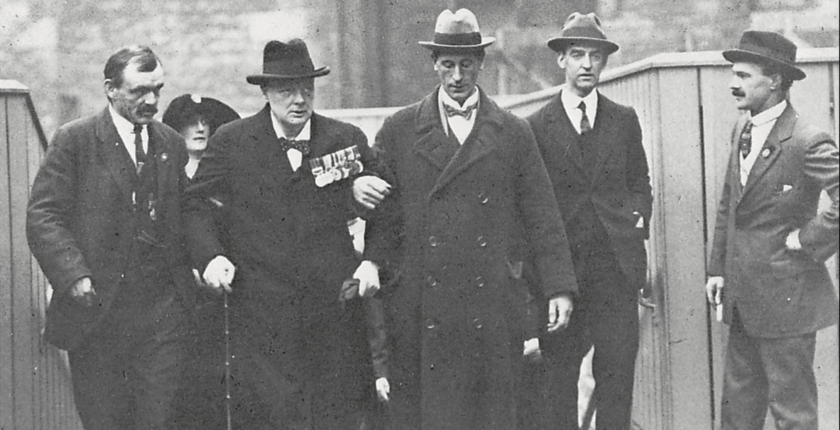 Churchill at Dundee after his operation for acute appendicitis, supported by his detective, November 1922. On the 15th, WSC and the Liberals lost the general election, and he famously remarked: “I found myself without an office, without a seat, without a party, and without an appendix.” (Hillsdale College Press) 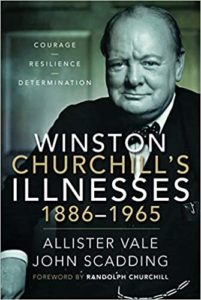 Sir Winston’s doctor, Lord Moran, had a best-seller with his 1966 diary-based volume, Churchill: The Struggle for Survival. Although ethically controversial, it was widely quoted in the profusion of Churchill biographies that followed. Many Churchill scholars and medical readers know of the more recent work of Professors Vale and Scadding. Following several learned articles on Churchill’s health in medical journals, they now offer a substantial book on the subject. Churchill’s Illnesses not only extends the period covered by Moran, but nuances and even contradicts him on many points.

It is often pointed out that medicine is an art, not a science. Churchill himself did so twice in his speech on the unveiling of the portrait of Lord Moran in 1951 [Vale and Scadding, 207]. Contemporary scientific research is associated with a highly technical vocabulary, often incomprehensible to the layman. The authors, however, are anxious not to confuse non-medical readers. Commendably, they always strive to give the explanation of technical words in plain English.

An example is their discussion of Churchill’ “Acute Stroke in June 1953 in London” (Chapter 19): “The stroke consisted of a left hemiparesis (weakness of the left side of the body). The dysarthria (slurring of speech) was probably in proportion to the observed facial weakness, rather than indicating a cerebellar deficit (a motor coordination centre of the brain)” [227]. Technical accounts are not omitted, but mostly limited to the final clinical discussion which concludes each chapter.

The chapters, arranged in chronological order, follow a consistent pattern. Vale and Scadding offer a state-of-the-art presentation and analysis of all the existing evidence. They first reference Churchill’s My Early Life, the Official Biography and The Churchill Documents. To this are added memoirs by his contemporaries, press reports, recollections and correspondence by his family and entourage. Particularly pertinent is the testimony of Lord Moran, consultants and nurses who examined Churchill at some stage in his life. Next comes a post hoc assessment—insofar as a retrospective diagnosis is possible so long after the event. Vale and Scadding consider the diagnoses and efficacy treatment offered by physicians at the time. Precisely, they note the evolution of medical knowledge—diagnostic procedures, pharmaceuticals and other treatments—available since Churchill’s time.

Here are two examples of this careful distinction. The authors say Churchill’s blood pressure, “regarded as borderline normal for a man of 74…would now be considered too high” [192]. They judge his doctors’ response to his 1949 stroke “according to their lights” (as Churchill would have said approvingly). They do not draw conclusions based on modern criteria. Also, in their Introduction, they emphasize the “huge medical advances since the time of Churchill’s death in 1965.” Among these are the “computerised X-ray (CT) head scan” and the “magnetic resonance (MRI) scan. [xx]

The chronological narrative starts with Chapter 1 in 1886, when Churchill contracted pneumonia at school in Brighton. Twenty-seven more chapters, (2-17, 19-28, 32) cover accidents, diseases, fevers, operations, strokes, convalescence and the terminal illness. All these are magnificently documented and discussed from a medical point of view, which conventional biographies cannot do. Chapter 20 is entitled “Churchill’s Triumph at the Conservative Party Conference in October 1953 in Margate.” This seems to deviate from this above themes, but in fact follows the usual pattern. Vale and Scadding end the episode as usual with “Medical Aspects.”

The penultimate chapter is “Churchill’s Terminal Illness in January 1965 in London.” Consistently, it ends with a discussion of “Medical Aspects”—but not the clinical. Instead it focuses on human reflections as Sir Winston would have liked them: “Churchill died with the greatest dignity,” write Vale and Scadding. “One might be forgiven for feeling that Jock, the cat, understood how much Churchill meant to the nation and to the world” [428].

Chapter 18, “Churchill Unveils a Portrait of Lord Moran in July 1951,” breaks the routine with a short, entertaining episode. Chapters 29-31, meanwhile take us back to serious matters. The first three are devoted to thematic aspects stretching throughout Churchill’s life. Chapter 29, co-authored with the dermatologist Dr. Ian White, examines “Churchill’s Skin Diseases,” a topic rarely broached in conventional biographies. It tells us that “Churchill was 72 when the first record of a dermatological complaint is available” [369]. The authors omit to note that Churchill was aware early of his “very sensitive cuticle.” WSC mentioned this to Violet Bonham-Carter in 1898, and his bill for silk underwear reached £80 a year.

Chapters 30-31, on the other hand, deal with questions which have been extensively examined. Seldom, however, has such academic rigor been applied. The first, co-authored with psychiatrist Dr. Anthony Daniels, is entitled: “Did Churchill suffer from the ‘Black Dog’?” The second takes up a familiar question: “Was Churchill an Alcoholic?’ For Vale and Scadding, the answer to that question is easy. In spite of all the common misapprehensions, they say, one needs only to consider the list of eleven possible criteria for Alcohol Use Disorder (the current technical word for alcoholism). This leads inevitably to the truth. “We conclude, to use the familiar lay term, he was not an alcoholic” [409].

The discussion of “Black Dog” focuses the book’s general skepticism about the value of Lord Moran’s published testimony. In just eleven pages [382-93], Vale and Scadding methodically demolish—there is no other word—Moran’s spurious psychologizing and non-sequiturs, often based on invented evidence—of course the most damning of indictments in the scholarly community. These pages alone vindicate the authors’ claim in their Introduction: “We believe that our account of a supremely accomplished and gifted world leader not only amplifies what has been published previously but also sets the record straight” [xix]. There is no doubt that they have achieved this objective.

Churchill’s Illnesses ends with a very useful 25-page summary of “Churchill’s Doctors” (Chapter 33). Even seasoned scholars will discover new names here, besides the well-known ones, from Dr. Roose, his childhood family doctor, to Lord Moran after 1940. Needless to say, all this is abundantly and impeccably footnoted. Curiously, the many medical journal articles quoted (most unknown to this reviewer) are not in the Select Bibliography. This lists only full-length books cited. A small reservation about the bibliography. One may wince at the entry, “Churchill, W. The Gathering Storm…Penguin Classics, 2005” [495]. The original date of publication (1948) should be included. One never knows these days: Some undergraduate somewhere might infer from this that Churchill was well and alive in 2005, still writing his memoirs!

In contrast, the copious index is exemplary, giving the names of diseases and drugs as well as people and places. Finally, one must not forget the 16-page central section of plates on glossy paper. This offers excellent, uncommon photographs of the many physicians mentioned in the text, besides familiar pictures of Churchill.

I cannot recommend this book more. No serious Churchill scholar will now be able routinely to quote Lord Moran as the final source on Churchill’s health. On that subject, scholars must henceforth acknowledge the decisive caveats introduced by this fine new work.

Abstracts of Vale and Scadding articles