“Winston Churchill: A Life in the News,” by Richard Toye 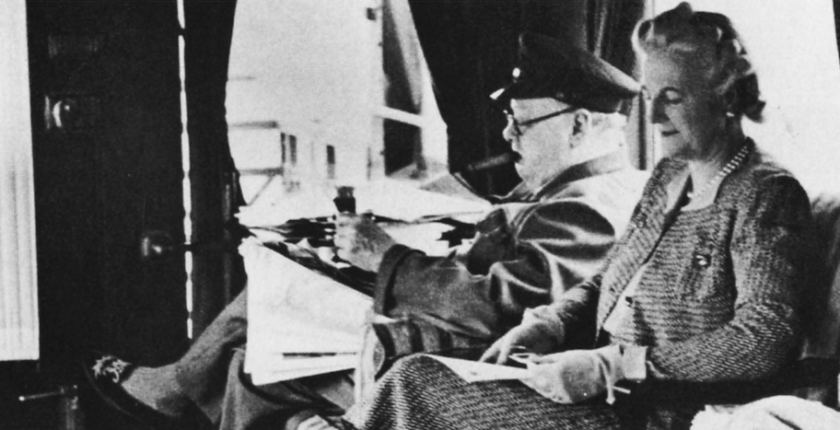 Nose for the News 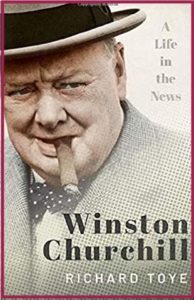 An online reviewer offers a quick take on this book which strikes me as appropriate. It’s “a book about a famous man that adds little to the average reader’s sum of knowledge.” If you know about Churchill’s life, this is not a necessary book. Here Churchill’s interesting and long life is filtered through clippings of contemporary press reports. An American reader likely will not be that interested in the ins and outs of English press barons as their papers covered Churchill’s exploits. Nor will they be surprised that a political leader would be upset at negative press. If you don’t know much about his life, skip this book and read a good general biography such as Andrew Roberts’ Churchill: Walking With Destiny.

This American reader, however, has a special interest in a book about Churchill in the news. I like the media. I’ve written about Churchill for 25 years and was a First Amendment and media defense lawyer for 40. My son is a journalist who has worked at most major television news networks and digital platforms. Today he is the executive producer for a national cable news program. The media has been good to us.

Judging from earlier books like Churchill’s Empire, Richard Toye is no admirer of Churchill. Prior to this book, he co-authored a much disputed article in the Journal of Contemporary History. There he alleged an improbable affair in the 1930s between Churchill and Doris, Lady Castlerosse. This managed to draw triple rebuttals, from Andrew Roberts, Piers Brendon and Richard Langworth. To date, Toye does not appear to have offered any defense of that article. He begins this book with another bizarre anecdote. Its only apparent rationale is to compare Churchill with Donald Trump on the topic of  “fake news.” And it’s quite a stretch.

After the Conservative defeat in the 1929 election, Churchill was photographed at 11 Downing Street, his former residence as Chancellor. He is carrying a book entitled War. The Daily Herald, radical left-wing newspaper and Churchill critic, ran this with the caption: “Mr. Churchill arriving in Downing Street with a book on one of his favourite subjects—‘War.’” Churchill’s private secretary complained that the photo was “deliberately faked or forged” in order to “sustain a prejudicial caption.”

In fact, the photo was genuine, and Churchill eventually accepted that it was. But he rejected the Daily Herald’s demand for “a complete, categorical withdrawal and apology.” The paper’s “abusive campaign” against him, Churchill replied, absolved him “from the need of making any further amends.”

After Toye gratuitously suggests Churchill was not a gentleman for refusing to apologize when proven wrong, he professes horror over the implications of Churchill’s response today. Churchill’s cry of “fake,” he writes, is “in many ways instructive. Today, in the era of Trump, authoritarian populism, and social media, cries of ‘Fake News!’ are ubiquitous.”

Toye appears oblivious to the fact that the initial offense was the Daily Herald’s caption. Clearly, it was a deliberate attempt to create a false impression. The caption omits telling readers anything about the book War. In fact, it was a popular German anti-war novel, first published as Krieg (1928). Still in print today, it has been compared favorably to Remarque’s All Quiet on the Western Front. Its author was a dedicated German communist, Ludwig Renn, the protagonist in his novel.

A more accurate caption would not have created so false an impression. Example: “Mr. Churchill arriving in Downing Street with a German communist’s anti-war novel on one of his favourite subjects—‘War.’” It might have created confusion—why would a warmonger read an anti-war book?—but not a false impression. Toye knew War was written to oppose not glorify strife. Yet he takes the Herald’s side, defending the false impression it intentionally created.

The author does reassure us, in case you were wondering. “In fairness, just as Donald Trump is no Winston Churchill, Winston Churchill was no Donald Trump.” That’s good to know, but Toye adds a qualifier. “Churchill’s legendary capacity for magnanimity was generally not much in evidence when it came to the press.” He doesn’t explain what he means by this, and fails to back it up. Churchill doesn’t come off in the book as any more thin-skinned about the press than any other politician, then or now.

The big one that got away

Toye mainly relies upon British newspapers and only rarely cites the North American press. His story is thus oddly incomplete. By ignoring American sources, he not only diminishes his critical case against Churchill. In particular, he misses the first great news controversy in which Churchill was the subject.

There is mention of Churchill’s first journalistic assignment, the 1895 Cuban civil war. But its American press accounts (Churchill’s first coverage by U.S. newspapers) are missing. It was a big story, too. Churchill came under fire for the first time in his life. He and his companion, Reginald Barnes, were awarded the Spanish Order of the Red Cross for gallantry. Elements of the English and American press were critical of his involvement. Yet Toye cites only the obscure Newcastle Daily Leader in England. “Spending a holiday in fighting other people’s battles,” the paper wrote, “is rather an extraordinary proceeding even for a Churchill.”

The book omits The New York Herald and other American newspapers which were far more critical of Churchill’s conduct. The uproar was so loud that, arriving back in New York, Churchill felt obliged to deny having been a combatant. So ardent a Churchill critic as Toye will regret not picking this low-hanging fruit.

Less censorious but making for great news copy was coverage in Joseph Pulitzer’s New York World. Prior to leaving for Cuba, Churchill had stayed for a week as the guest of Bourke Cockran, the lawyer-politician. Cockran represented the World in libel cases, which proved fortuitous. The newspaper was uncritical of Churchill’s conduct in Cuba. Instead it published a tongue-in-cheek article poking fun at its competitors’ overblown complaints. Unfortunately, Toye’s concentration on British sources misses this jolly U.S. press cutting:

The young warriors were Winston Leonard Spencer Churchill, son of the late Lord Randolph Churchill, and R.W.R. Barnes. Both are in the Fourth Hussars.  When the hunting season began in England they tossed up a penny to see whether they should chase foxes this winter or watch Gen[eral] Campos chase rebels. The rebels won, and they obtained a two months’ leave of absence and started for Cuba.

The Bungtown Bird of Freedom and the Kalamazoo Daily Celery Stalk printed many flaming editorials on the conduct of these gentlemen in going to Cuba, declaring that they were emissaries of the British Government sent to teach Campos how to whip the secessionists, and that England was throwing more bricks at the Monroe Doctrine. Of course this was nonsense. Churchill is not yet 21, and knows only the amount of strategy necessary for the duties of a second lieutenant. He and Barnes went on the trip actuated only by youthful enthusiasm.

From time to time the book annoys the reader with gratuitous observations. We read that Churchill believed his father thought being a reporter was “a respectable calling.” (A reference to Churchill’s imaginary conversation with Lord Randolph, The Dream.) Toye adds: “…this is not to say that Winston imitated his father in all respects. Throughout his active life, many observers found him to be unreliable, erratic, irresponsible and imprudent, by turns.” The “many observers” are unidentified, so we don’t know if these many were friends or foes. But they obviously reflect the author’s own view.

Another example is when we read The Times’s praise of Churchill as Minister of Munitions (“Munitions Triumph”) in April 1918. This, we are told, “may have owed something to his own public relations efforts.” (Whenever he read assertions like “may” or “perhaps,” Sir Martin Gilbert would say, “perhaps not.”)

Toye: “Caught in the photograph”

There are many more examples where Toye annoys with superfluous interjections, but I’ll close with this one. He makes a passing reference to Churchill’s “dislike” of news photos that “captured celebrities in unflattering poses.” The source for this (in his endnotes) is a 1936 Churchill letter to The Times. He goes on to write the longest endnote in the book. He gratuitously mentions the alleged liaison with Lady Castlerosse, citing his Contemporary History article. He does so by using Churchill’s objection to paparazzi as if it were a smoking gun confirming the affair. On holiday in 1934, Churchill “chased away” a photographer who snapped him painting—with Lady Castlerosse “caught in the photograph.” The famed adulteress, outed by the press!

Having defended quite a few libel cases, I was disappointed that Toye doesn’t cover any of Churchill’s libel suits except the first. That was when someone at Sandhurst accused him of engaging in “acts of gross immorality of the Oscar Wilde type.” Toye says this was “the first of a series of successful libel actions that he would pursue across the length of his career.” But we are told nothing more about the other cases. So, except to show that Churchill was once accused of homosexuality, why even mention it?

I guess not, but those who have made it this far in the review might be interested in two major libel cases. They occurred in the early 1920s. Churchill was accused of being bribed by wealthy Jews to give a positive “appreciation” of the Battle of Jutland. The scheme was designed so they could make a killing in the stock market. Since Life in the News offers endnotes referencing the author’s other works, I will follow suit. My article “Churchill and the Litigious Lord” begins here and continues in Part 2.