Tonypandy and Llanelli: Myth and Reality 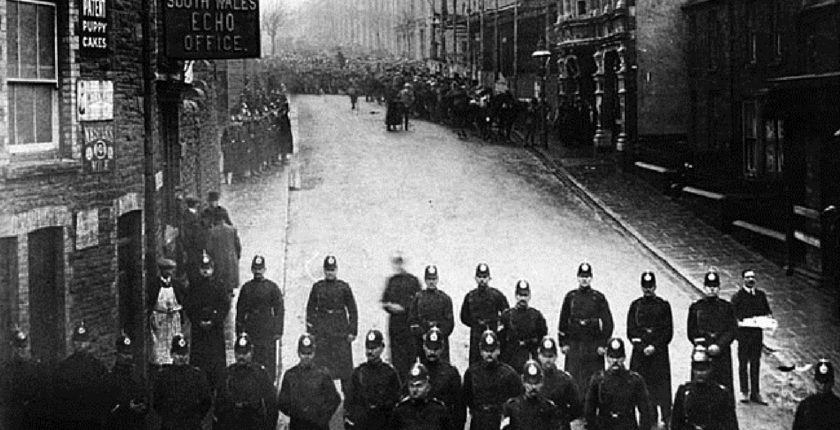 Police officers blocking a street during the Tonypandy riots of 1910. (Wikimedia)

For over a century it has been part of socialist demonology that Churchill, as Home Secretary in 1910-11, sent troops to attack striking coalminers in the Rhondda Valley, Wales. In an otherwise generous tribute to Churchill following Sir Winston’s death in 1965, Labour Prime Minister Harold Wilson found it necessary to remind Parliament about various subjects in this book, including Sidney Street, Gallipoli, and “the sullen feet of marching men in Tonypandy.”1

And for half a century Churchill’s defenders, beginning with his son and including this writer, have insisted the striker stories were fabrications. Randolph Churchill wrote that his father’s conduct had been “grotesquely distorted…. Socialist propagandists have sought to make martyrs of the miners of Tonypandy comparable to those of Tolpuddle in 1834. Tonypandy in reality is only distinguished from the other Welsh villages involved because of the high degree of looting in which the miners indulged; but a lie once started can seldom be overtaken.”2 Randolph left his readers with the impression that his father had forbidden the dispatch of troops to scenes of disturbance.

Out of this has grown a considerable muddle, to which I have added my share. Let us start by correcting the record: Churchill did send troops to scenes of strikes and rioting in Wales, and in 1911 their presence at one location resulted in two to four fatalities.

Now, as the traffic judge used to allow me to do in my leaded-foot days as a teenage driver, I shall plead on Churchill’s behalf: “Guilty with an explanation.”

The coalminers’ strike in the Rhondda Valley grew out of disputes over wage differentials for working hard and soft coal seams and the need for more safety inspections—death rates in the mines had reached the highest level since statistics had been compiled. Up to 30,000 miners struck, and some rioted; local authorities appealed for troops. On November 6, William Abraham, a Member of Parliament and president of the South Wales Miners federation, arrived at the Home Office to plead with Churchill that troops not be sent.

The next day Churchill met with Secretary of State for War Richard Haldane. They decided to dispatch police constables, but to withhold troops. Churchill said the use of soldiers was inappropriate in a civil disorder. He also promised the strikers an immediate Board of Trade inquiry, and sent them a message:

“Their best friends here are greatly distressed at the trouble which has broken out and will do their best to help them get fair treatment….But rioting must cease at once so that the enquiry shall not be prejudicial and to prevent the credit of the Rhondda Valley being impaired. Confiding in the good sense of the Cambrian workmen we are holding back the soldiers for the present and sending police instead.”3

The Conservative press attacked. The Times said that Churchill “hardly seems to understand that an acute crisis has arisen which needs decisive handling. The rosewater of conciliation is all very well in its place, but its place is not in face of a wild mob drunk with the desire of destruction. Men’s lives are in danger, not to mention the poor horses….”4

The Liberal press praised Churchill’s restraint. “The brave course was also the wise one,” wrote the Manchester Guardian. “One can imagine what would have happened if the soldiers instead of the policemen had come on the rioters while they were pillaging. Bayonets would have been used instead of truncheons; the clumsier methods of the soldiers would have exasperated the crowds, and instead of a score of cases for the hospital there might have been as many for the mortuary.”5

Churchill’s decision not to send troops proved short-lived. Rioting did not end, and spread to the town of Tonypandy, where one man was fatally injured and sixty-three shops were looted and damaged. The officer commanding the Southern Command dispatched 400 standby soldiers. Yet on 8 November Churchill issued verbal instructions that “in no case should soldiers come in direct contact with rioters unless and until action had been taken by the police.” If police were overpowered, troops could be deployed, but even then a number of police should remain, “to emphasise the fact that the armed forces act merely as the support of the civil power.”6

“By preventing bloodshed,” Paul Addison wrote, “Churchill also prevented a debacle for Liberalism.” Writing to Lloyd George the following spring, Churchill attempted to follow-up his November promise to address grievances. The government, he said, should institute stronger safety regulations and inspections, financing the expense with a surcharge on mineowners’ royalties. His hopes were thwarted, Addison continued:  “The soldiers did not kill anybody, but they remained in the Rhondda until October 1911 and as David Smith observes, their presence ‘ensured that the miners’ demands would be utterly rejected.’”7

Nine months later, a national railway strike broke out when rail operators refused to recognize the unions as negotiators. Troops were sent to numerous scenes of disturbances around the country. Throughout this strike, troops had orders to stand by and act only if public security was endangered. Mostly the troops acted with caution, and when they did fire, they usually aimed over the heads of crowds.

Lloyd George settled the rail strike by convincing the railways to recognize union negotiators. But in Llanelli, Wales—two days, ironically, after the strike had ended—the only fatalities from the use of troops occurred. A train was held up by rioters and the engine driver knocked senseless. Soldiers attempted to clear the track but looting began, and they fired into the crowd, killing two or four rioters (accounts vary).

With the strike over, the troops were withdrawn. On August 20th King George V telegraphed Churchill: “Glad the troops are to be sent back to their districts at once: this will reassure the public. Much regret unfortunate incident at Llanelli. Feel convinced that prompt measures taken by you prevented loss of life in different parts of the country.”8 It is possible to conclude that Churchill had been unwise to send troops to take control of the rail network, though he was not of course directly responsible for the shootings.

“For all the criticism that came Churchill’s way from the Labour members of Parliament for his attitude to the use of troops during this strike,” wrote Randolph Churchill, “there is little doubt that the King’s telegram represented public opinion at the time. But Labour was not to forget….”9The myths of Tonypandy were revived by Labour during the General Strike of 1926, and the events there and at Llanelli have repeatedly been confused over the years.

“Guilty with an Explanation”

There was another reason why anxiety ran high during the 1911 rail strike. A few weeks earlier, the Germans had sent a gunboat to Agadir, French Morocco. Britain was France’s ally, and rumors of war with Germany were rife. David Lloyd George, insisting that the Agadir Crisis was a threat to peace, declared that the Germans “would not hesitate to use the paralysis into which the country was falling in order to attack Britain.” Paul Addison recorded the public mood:

The unprecedented challenge of a simultaneous national stoppage by all four railway unions convinced respectable opinion that the world was about to be turned upside down….Churchill’s own apprehensions were connected, apparently with fear of subversion in Germany….He was also informed by Guy Granet, the general manager of the Midland Railways, of allegations that labour leaders were receiving payments from a German agent….Conservatives applauded him for taking decisive action. But there were loud protests from the Labour party and left-wing Liberals, who accused him of imposing the army on local authorities against their will, and introducing troops into peaceful and law-abiding districts.10

In handling the rail strike, Ted Morgan wrote, what Churchill’s critics could not see “was the number of saved, and the number of tragedies averted. In their drunken frenzy, the Llanelli rioters had wrought more havoc and shed more blood and produced more serious injury than all the fifty thousand soldiers all over the country.”11

After the deaths at Llanelli, Churchill was roundly condemned and the Manchester Guardian, which had earlier praised him, turned against him. Keir Hardie, founder of the Labour Party, accused Churchill and Prime Minister H.H. Asquith of “deliberately sending soldiers to shoot and kill strikers.” That charge has endured for a century; yet Churchill in August 1911 had told the House of Commons: “There can be no question of the military forces of the crown intervening in a labour dispute.”12

Why then were military forces used at Llanelli? Defending himself to William Royle, organizer of the Manchester Liberal Party, Churchill explained: “The progress of a democratic country is bound up with the maintenance of order. The working classes would be almost the only sufferers from an outbreak of riot & a general strike if it c[oul]d be effective would fall upon them & their families with its fullest severity.”

Churchill told Royle, as he had Lloyd George, that the miners’ wages were far too low. The rise in the cost of living, he wrote, made it necessary that wages be raised: “I believe the Government is now strong enough to secure an improvement in social conditions without failing in its primary duties.”13

The old slanders of Tonypandy were still circulating in the general election campaign of 1950. Speaking at Cardiff, Churchill told his Welsh audience that he had sent police to Tonypandy, with the sole object of preventing bloodshed. He was  much criticized, he added, for his “so-called weakness….But I carried my point.” The police had met the strikers “not with rifles and bayonets, but with their rolled-up mackintoshes. Thus all bloodshed, except perhaps some from the nose, was averted and all loss of life prevented.”14 This was inaccurate, but it does not alter Churchill’s judicious instincts and actions, or his wish to address strikers’ grievances.

The myth lived on. Two years after Churchill’s death an Oxford undergraduate, discussing Sir Winston’s career with his tutor, asserted confidently that “Churchill had ordered tanks to be used against the miners at Tonypandy. His tutor commented that this showed remarkable farsightedness on Churchill’s part, as the tank had not yet been invented.”15

Vindication of a sort did appear via the BBC, which interviewed surviving strikers fifty-five years after Tonypandy. Among them was W.H. (Will) Mainwaring, at the time one of the youngest militants in the South Wales coalfields, subsequently the co-author of a famous pamphlet, The Miners’ Next Step. All those many years later, this ardent Labour Party activist still spoke with pride of his championing of the miners and his record as a protester.

On Churchill’s actions Mainwaring was unequivocal: “We never thought that Winston Churchill had exceeded his natural responsibility as Home Secretary. The military that came into the area did not commit one single act that allows the slightest resentment by the strikers. On the contrary, we regarded the military as having come in the form of friends to modify the otherwise ruthless attitude of the police forces.”16

Over a century later, when the actions of police forces are questioned, when the National Guard is sometimes deployed during riotous protests in which local residents are the main victims, Churchill’s experience is worthy of study. And his magnanimity is worthy of reflection.

Excerpted from the author’s Winston Churchill, Myth and Reality: Tall Tales, Lies, Fables, Distortions and Things that Go Bump in the Night (2016).

Featured Image: Police officers blocking a street during the Tonypandy riots of 1910. (Wikimedia)