“Winston Churchill: The Spirit and the Letter” – by Z.W. Wolkowski 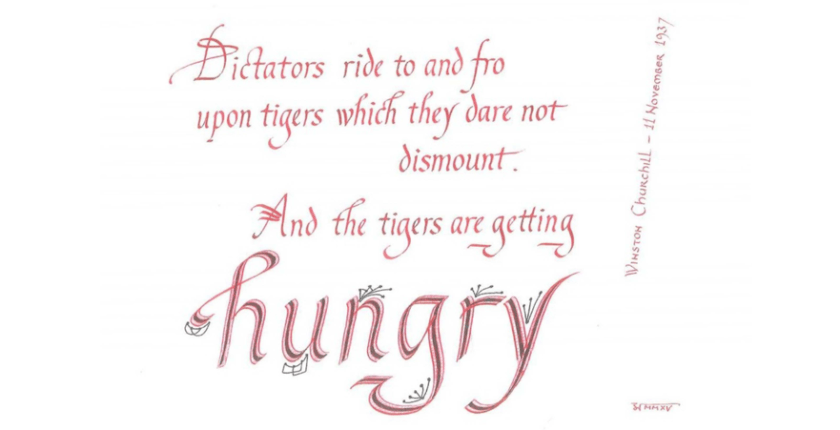 You might describe this grossly overpriced self-published work as an under-the-coffee table book: no bulk, little content, likely to dive quickly from the tabletop to the bottom shelf.

The author, who teaches at the Sorbonne, presents a stylistic arrangement of chirographic and semiotic (calligraphic) depictions of Winston Churchill quotes (some of them genuine). The pages are one-sided without numbers, and there is no preface, introduction or text. The “reader” must make do with a three-page “afterword.” Here we are told how signage goes back to the cave paintings of the Stone Age.

Wolkowski explains that “the permanent interaction between the stroke and its significance is a subject of much research, which is both artistic and literary, therefore trans-disciplinary and transcultural.” His studies consider “the relationship and interface between Spirit and Letter, between the Inner and the Outer, between Essence and Form.” Maybe it’s just as well the text is limited.

Among his artistic tools used are pointillism, a 19th century painting technique in which small, distinct dots of color are applied in patterns to form an image with a three-dimensional effect. He says he has been doing this since 1987, exhibiting in churches and libraries in France, Poland and Lithuania. He has self-published ninety similar works. covering historical figures, churchmen, philosophers, composers and writers—Stevenson to Poe, Napoleon to St. Augustine, Verdi to the Beatles, Robbie Burns to Alan Turing—as well as the Olympic games, French cuisine, even the Titanic. We are not making this up.

For Churchill, Wolkowski applies his calligraphy to twelve quotations, six of them correct. Golden oldies—dictators riding tigers, the Russian enigma, blood toil tears and sweat, “the Few,” “empires of the mind” and the famous Iron Curtain line are accurate. Two others are almost accurate (corrections in italics): “a medal glitters but it also casts a shadow”; “If the British Empire and its Commonwealth last for a thousand years” (he has them backwards).

The other four should not be there. When he joked that democracy was “the worst form of government, except for all those other forms”; and that the only traditions of the Royal Navy were “rum, sodomy, prayers and the lash,” Churchill was repeating old catchphrases by others. And it was Harold Macmillan not Churchill who said, “Jaw-jaw is better than war-war”; almost certainly, it was Churchill’s friend F.E. Smith who told Lady Astor that if they were married and she’d poisoned his coffee, he would drink it. Six out of twelve is not a passing grade, but throw in the near-misses and give him 75%.

If you enjoy calligraphy, Wolkowski’s renderings may appeal to you. There is nothing else to recommend this book. To paraphrase another alleged but unverified Churchill quote, among self-published books, it has all of the virtues we despise and none of the vices we admire.